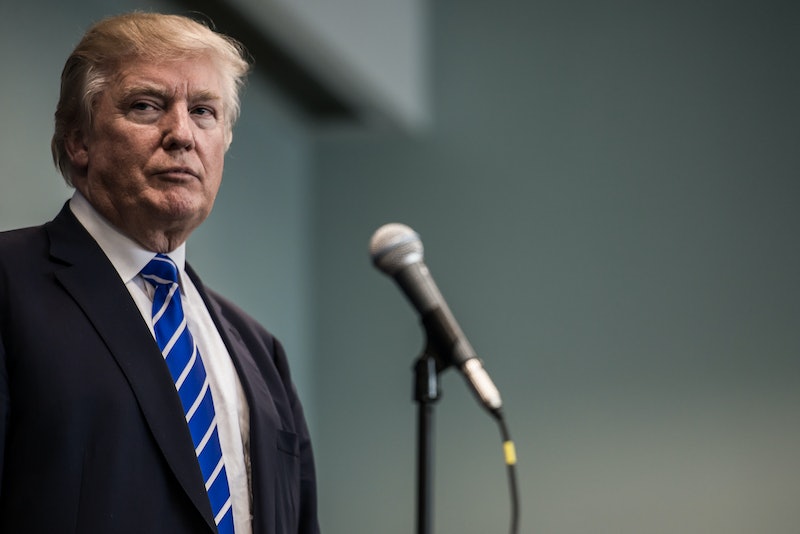 Donald Trump's last name seems like a fit too good to be true. After all, the brash, arrogant GOP frontrunner can never seem to stop talking about how he "trumps" all of his rivals in success, wealth, and capability. However, as it turns out, the Donald's suspiciously appropriate surname is only two generations old. This certainly begs the question, where did Trump's name come from?

The recently recovered will of Trump's grandfather, an immigrant from Germany, reveals that when the elder Trump arrived in New York City in 1885, he went by the name of Friedrich Drumpf. Drumpf was born in Kallstadt, Germany in 1869 and, according to the Daily Mail, arrived on American soil with "empty pockets." Drumpf then moved to Seattle, according to Curbed, where he became a naturalized American citizen, Anglicized his name to become "Fred Trump," and began pursuing a career in real estate. Fred Trump would eventually return to Queens, where he would die of the Spanish flu at 49 years old and leave $31,642.54 (over $500,000 today) to his son and wife, according to the Daily Mail. His son, Fred C. Trump (Jr.), used his inheritance to launch the beginnings of the Trump empire, which his son, the current presidential candidate, would eventually inherit and expand.

The story of the Trump family's origins in America isn't particularly new, resurfacing and diffusing through the Internet after The New York Times ran coverage of it in response to Trump's slanderous words against Mexican immigrants during his campaign announcement. The tale serves as a rebuttal to the "rags-to-riches" portrayal of Trump's entrepreneurial successes and goes against his xenophobic platform by reminding us that all immigrants, like his grandfather, are capable of contributing to America. But there's plenty of significance in the original name "Drumpf" alone, with Trump presently campaigning in strong favor of assimilation for Mexican immigrants.

According to The New York Times, in the 19th and 20th centuries, Anglicizing names upon arriving on American soil was essentially a "rite of passage" to immigrants from Eastern and Southern Europe and Asia. Historically, arriving in America essentially meant taking on an entirely new identity and abandoning almost every aspect of their native cultures not only to be socially accepted, but even to simply find housing and work. Today, conservative politicians may not be demanding Mexican immigrants change their names, but the mounting call for nationalizing the English language is a subtle disappointing reflection of centuries-old intolerance, and the sacrifices the far-right would have immigrants make before allowing them to call themselves Americans. "We have a country, where, to assimilate, you have to speak English," Trump said in the second GOP debate. "This is a country where we speak English, not Spanish."

There's plenty we can take away from the Trump family's origin story. There is, of course, his reliance on inherited wealth, but ultimately, we should understand the Drumpf to Trump story and why the original name was phased out. This country was built on immigrants, and it would be good to remind Trump that his family was on the other side of his "us versus them" rhetoric not too long ago.

More like this
'Waterloo Road' Is Back, With More Than A Few Familiar Faces
By Sam Ramsden and Vivian Iroanya
What To Know About Martin Bashir After Watching 'The Crown'
By Bustle UK
The Founder Of Chippendales Ordered Nick De Noia’s Murder
By Brad Witter
Chippendales Founder Steve Banerjee Died Hours Before His Murder Sentencing
By Brad Witter
Get Even More From Bustle — Sign Up For The Newsletter