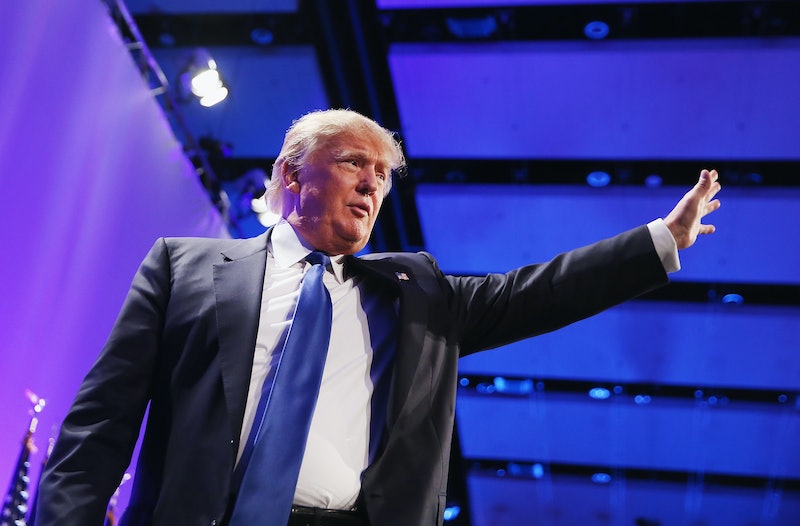 Donald Trump's name is exploding in the news as company after company cuts ties with him for derogatory comments he made about Mexican immigrants in his June 16 presidential announcement. Few have been shy about pointing out the hypocrisy of Trump's views on immigration, as his paternal grandparents were immigrants from Germany. The presidential hopeful's early life is riddled with similar ironies that altogether propelled him into a prosperous career — and an even more prosperous bank account. So, how did Donald Trump get rich? In short, Trump's career began with tremendous socioeconomic privilege that really hasn't changed much since.

In 1959, Trump's parents sent him to the New York Military Academy in the hopes that military school would teach him how to channel his assertiveness and energy in a more positive manner — something he's arguably still struggling with. Trump went on to earn both academic and athletic honors and proceeded to attend Fordham University before transferring to the Wharton School of the University of Pennsylvania and joining one of the nation's few real estate schools at the time.

Trump's father, Fred Trump, was an affluent real-estate tycoon whose wealth is too often under-credited when it comes to explaining how the Donald made his fortune. Funding from the Federal Housing Administration (FHA) enabled Trump's father's real estate organization to grow dramatically following the Great Depression, and in 1974, Trump acquired his father's business and expanded it further.

Trump further developed his father's business, going into golf courses, hotels, and casinos, and eventually establishing the Trump Organization in 1980. Ten years later, in 1990, his ambition caused the Trump Organization to implode. Unrestricted attempts at leveraging had put the company $5 billion in debt.

According to Brian Miller and Mike Lapham's The Self-Made Myth: And the Truth about How Government Helps Individuals and Businesses Succeed, crafty dealings with 70 different banks rescued Trump's business from bankruptcy. Trump managed to defer on more than $1 billion, and by taking out mortgages and sacrificing some properties, he was able to save his business empire and even proceed to expand it.

In 1995, Trump publicly launched Trump Hotels & Casino Resorts, Inc. That year, he sold 10 million shares at $14 per share, and a year later in 1996, Trump managed to sell 13.25 million shares at $32.50 a share, according to Miller and Lapham. Despite financial support from the Securities and Exchange Commission (SEC) for his new enterprise, Trump decried government involvement with businesses as a threat to the "American Dream" in his book, The America We Deserve:

The greatest threat to the American Dream is the idea that dreamers need close government scrutiny and control. Job one for us is to make sure the public sector does a limited job, and no more.

The passage is ironic, to say the least. Government funding enabled Trump to develop Trump Hotels & Casino Resorts Inc. and, a generation before him, allowed his father to launch the original family business. Trump would go on to inherit his father's real-estate organization, dependent on the FHA throughout the 1930s, and would rely on its earnings before eventually forging his own path. In 2011, the Donald further elaborated on his theory of how the government is increasingly becoming a roadblock for American businesses in a 2011 interview with CNN:

In spite of the reliance of Trump's enterprises on millions of investors, the Donald tends to credit his individual effort with all of his triumphs. At the Conservative Political Action Conference in 2011, he wasn't shy about crediting his "billions" entirely to his own abilities.

Over the years I’ve participated in many battles and have really almost come out very, very victorious every single time. I’ve beaten many people and companies, and I’ve won many wars. I have fairly but intelligently earned many billions of dollars, which in a sense was both a scorecard and acknowledgment of my abilities.

The ultimate issue with Trump's attitude regarding his wealth reflects the problematic views of most of the GOP in terms of economic policy. Trump consistently fails to recognize the significance of the socioeconomic class he was born into and the government's financial support in amassing his business empire. His inability to concede the economic privilege he has had all his life and its tremendous role in his career is what keeps him, and most GOP candidates for that matter, perpetually disconnected from the American middle class.