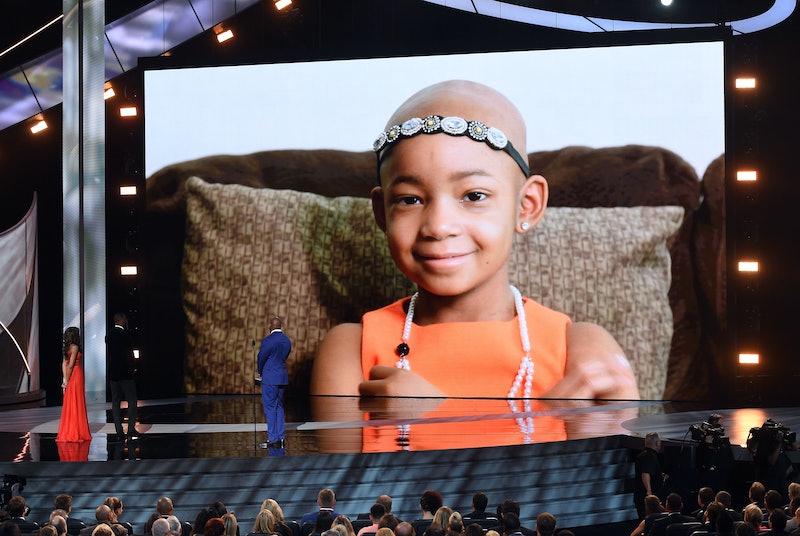 They say that all press is good press, but... well, some press is definitely better than other press. The nightly news has a tendency to focus on the darker side of society — crime, natural disasters, terrorism, etc. — but that doesn't stop some of the most uplifting news stories from capturing our attention and lifting our mood. Whether they focus on a good deed, an underdog, or a cute kid, these headlines will instantly put you in a good mood.

Hopefully, you'll remember or recognize some of these stories. Thanks to social media, stories like these can now go viral, spreading in ways that they probably never would have through traditional media. In fact, some of these stories wouldn't have even become news if it weren't for social media spreading the word about an injustice and generous followers reaching out to correct the situation. (You can thank other social-media-esque platforms like Kickstarter for the latter component.)

No matter how it unfolds, uplifting news can brighten your day, inspire you to give back to your community, and make you remember what's really important in this world. By the way, if you're feeling sappy now, just wait 'til you read the stories.

1. Detroit's Walking Man Gets A Car

Early in 2015, the Detroit Free Press told the story of James Robertson, a 56-year-old man from the Detroit area who walked more than 20 miles each day to get to and from work. His car had died on him and he couldn't afford a new one, so he made the trek each day — even in Detroit's bitterly cold winters — for 10 years. (He also had a perfect attendance record at work... so keep that in mind next time you want to call in sick.) After the story went viral, a local car dealership donated Robertson a brand new Ford Taurus — the model of his choice — and complete strangers donated some $350,000 to his help his cause.

This NFL contract went far beyond football. In September 2014, the Cincinnati Bengals promoted practice squad player Devon Still to its active roster, more than quadrupling his salary. The raise came at a good time: Still's then-4-year-old daughter, Leah, had been battling a rare form a pediatric cancer for months, and Still said her medical bills could surpass $1 million. In addition, the Bengals offered to donate all proceeds from the sale of Still's number 75 jersey to pediatric cancer research. As an added bonus, Leah is currently in remission.

Back in 2012, then-high school junior Meghan Vogel won her state's 1,600-meter championship race. Later that day, she came in last in the 3,200-meter race, but for a good reason. When one of her opponents, Arden McMath, injured herself on the last lap of the race, Vogel picked her up and guided her to the end of the race. At the finish line, Vogel even positioned herself in a way that would make it clear that McMath finished before her. Also impressive, the two girls still managed to finish the two-mile race in about 12 1/2 minutes.

This one's a no-brainer. Malala Yousafzai survived an attempted assassination attempt by the Taliban for her activism in Pakistan. Before and since her attack, Yousafzai has used her voice to speak out in support of female education. It's why the Taliban targeted her, and it's why she received the Nobel Peace Prize in 2014. At just 17 years old, Yousafzai became the youngest recipient of the award, as well as the only Pakistani winner of the Peace Prize. In 2015, she celebrated her 18th birthday by opening a school for young girls in Lebanon.

In 2013, Paul McCarthy used a 3-D printer to make his son Leon, who was born without fingers on his left hand, an affordable prosthetic hand. What makes this story even better is that McCarthy got the idea from a 2011 story of the same nature. McCarthy needed an affordable option for his son's disability, and he found the answer in a technology that's quickly becoming more and more accessible.

We could always use some more good news in the world. Here's to the happy endings and silver linings that make for a nice pause in the regular news cycle.

More like this
The Most Powerful Photos From The Weekend’s Abortion Rights Protests
By Melanie Mignucci
The Families Of Grenfell Tower Are Still Waiting For Justice, Five Years On
By Bustle UK
Why You're Seeing Green Bandanas At Abortion Rights Protests
By Lexi Inks
The Nike & Jacquemus Collab May Have Been Inspired By Princess Diana
By Frances Stewart
Get Even More From Bustle — Sign Up For The Newsletter