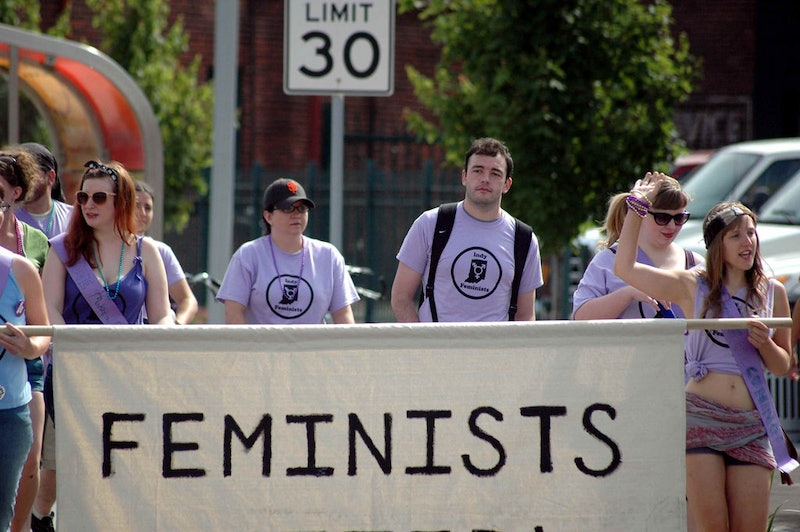 With women's rights being one of the major platforms in the 2016 presidential race, the conversation surrounding feminism is currently highly visible. Despite the increasing awareness of the movement, though, one very persistent question is keeping pace: Is feminism sexist? In a word, nope — an answer which feels like it should be obvious. Still, an Internet search will quickly yield many men and women who have sunk their teeth into this anti-feminist rhetoric. And, because it is a conversation that is both relevant and important, the debate over feminism being a sexist enterprise merits further discussion.

But first, we must understand that feminism in and of itself is not a perfect movement. For as many issues as feminists have succeeded in championing for or against, the movement has also frequently forgotten the issues that affect women who aren't white, cis, and hetero. That's where intesectional feminism comes in. The way I, as a white, cisgender, hetero woman, experience the inequalities feminism strives to correct is different from the way a woman of color or a trans woman experiences those inequalities — something which intersectionality addresses. Feminism that will truly change the world for the better cannot separate issues of sexism from those of racism, transphobia, homophobia, and more, because the crux of the matter lies at the intersection of all these systems of oppression.

"White feminism" — that brand of feminism that ignores intersectionality and is only beneficial to a small group of women (white, cis, hetero ones) — demonstrates that yes, feminism as a whole does have its failings. A large part of the battle feminism is fighting for, however, is about addressing those failings and improving upon them. The ultimate goal is equality for all — an important point to remember when discussing whether feminism is sexist.

With that in mind, let's directly address some of the tenets proffered in defense of the "feminism is sexist" logic found on a particularly impassioned Debate.Org forum — and why the arguments don't ring true.

1. "When you focus equality on a specific group of people, that's not focusing on equality."

The dictionary definition of feminism — that which the movement is trying to achieve — is "the theory of the political, economic, and social equality of the sexes." The reason the movement focuses on women's rights is because that's the side on which the inequality currently exists. White women still only make 78 percent of that which is earned by a white man, with that figure dropping to 64 and 53 percent respectively for black women and Latinas. By the same account, 75 percent of elderly people living in poverty in America are women, highlighting the sizable gap in poverty rates between the sexes. These are but a few of the ways that women lack equal rights in our society.

2. "There are many downsides to being a man, which feminism ignores."

These downsides, alleges one critic, include longer jail sentences than women and paying more child support. And while it's true that everyone has to deal with less than desirable circumstances at some point in their lives, let's break some of this down. Jail sentences may actually be further illustrating the need for feminism — a 2009 study suggested "judges treat women more leniently for practical reasons, such as their greater caretaking responsibility." As for child support, the system may seem skewed in women's favor, but the reality is that women outnumber men as custodial parents. Since they have primary responsibility of the child, they inevitably contribute in ways the non-custodial parent does not. Plus, on average, custodial parents only receive about $311 a month, which isn't an unfair amount when you consider the cost of caring for a child or children around the clock. See also: Feminism isn't comprised solely of women.

3. "The family unit has been destroyed because of feminists' distorted views on humanity."

This claimant, who declares feminism is the new Nazism, purports that divorce rates are so high "because nine times out of ten, men get completely screwed over with courts blatantly taking one side over the other with no ramifications." Two things. First, I couldn't find evidence of the statistic anywhere. Second, if you are in court, divorce proceedings have already begun. Thus, this can't actually be part of the argument for what causes divorces; it's circular logic. As for feminists' "distorted views of humanity" destroying the family unit, well, this is just crazy talk, no? The things that feminists work toward — like striving to be better educated, enjoy more gainful employment and have the right to choose if and when they use their body to procreate — contribute to society's prosperity. We're part of the evolution, not the devolution.

4. "Feminists need to get a life and stop feeling the victim. We are all victims at some point in life."

This may come as a surprise to some people, but feminists don't inherently consider themselves victims. On the contrary, we're a rather empowered group. And, yes, women have made progress in terms of disparity, oppression and discrimination but, A) this is a direct reflection of the forward momentum of the feminist movement, and B) that progress is still unequivocally unbalanced — women of color, women of different religions, and women of the LGBTQ community do not enjoy the same threshold of progress as cisgender, hetero, white women. And it's unfair to compare the trials men experience with the way women are being denied fundamental rights that should be inherent. It just doesn't work like that.

5. "Feminism was needed in the early 20th century, it got women the vote and other important rights, but now it's just an entitlement for affirmative sexism."

Hmm. Curious. I don't remember getting the memo that women have total autonomy over our bodies like men. For that matter, I must have also missed the memo where we all got raises and promotions to bring us parallel with our working male counterparts. Ladies, we should be celebrating. Break out the bubbly! Only no, because as much as we'd love for this to be true, it simply isn't.

6. "Feminism is wrong, as is masculanism, but masculanism has for the most part died down."

To label all feminists as man-haters is to group an entire movement according to its fringe fundamentalists. Despite the assertion that "feminism states men are pigs and deserve worse rights than women," feminists in fact truly do want equality among the sexes. No more, no less... equal. The words we're looking for in relation to the mentality referenced here are misogyny, or the belief men are better, and misandry, or the belief women are better — neither of which are tenets of the feminist ideology. And, well, "masculanism" or misogyny is unfortunately alive and thriving. Need proof? Simply try to recall the last time men had to have their rights voted on. Don't spin your wheels too hard, though. The answer is never.