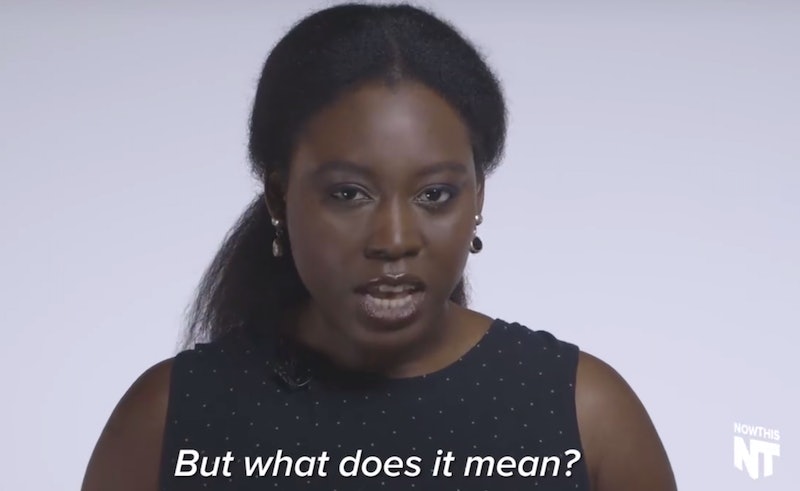 In the midst of the Taylor Swift / Nicki Minaj kerfuffle last month, did you find yourself wondering what, exactly, "White Feminism" entails? Although the term is thrown around willy-nilly online, many women are unfamiliar with it. Which is why The Huffington Post created the video "Why We Need To Talk About White Feminism." In the two-minute clip, culture writer Zeba Blay and senior women's editor Emma Gray explain everything you've ever wanted to know about White Feminism — what it is, how it manifests, and how it affects every woman. Yes, even you.

Unless you're an active part of the feminist community (or keep up with Lena Dunham, who is accused of White Feminism with astonishing regularity), it's entirely possible that Swift and Minaj's tiff could be the first time you've heard White Feminism discussed. It's all very Fight Club; rule number one is not to talk about the flaws of the feminist movement, and especially not with outsiders.

Do you see the irony here? Even a brief primer on this topic shows how far we have to go as a movement. How can feminism claim to be inclusive if it excludes entire groups of women? But as Blay and Gray point out, the first step towards change is discussing the problem.

With that in mind, let's take a look at some of the biggest lessons to be learned from the video, which both points out the flaws of White Feminism and stresses why intersectionality is so important:

1. White Feminism Assumes The Default Is White, Cis, And Straight

The video cites the wage gap as an example. "Most of the time, Latina and black women make even less than white women," Gray points out. White Feminists almost always speak from a position of privilege, downplaying or ignoring that fact that it won't help women of color.

It's safe to say that everyone agrees that police brutality should have been addressed a long time ago. However, although this definitely should be viewed as a feminist issue, White Feminism tends to ignore the race-related elements of it. "If Sandra Bland had been a white woman, would a simple traffic stop have resulted in an arrest?" Blay asks. "Would she be dead?" White Feminism doesn't even ask these important questions, let alone address them.

To see the extent to which whiteness is idealized in our culture, just walk down the dreaded Pink Aisle in a toy store. Dolls are almost always primarily white, with perhaps one or two token "friends" of color, driving home the idea that "white" equals beautiful leading lady, while "nonwhite" equals sidekick only. Furthermore, as Gray points out, scantily-clad white models are the norm in many fashion spreads, while scantily-clad models of color (or pop stars like, say, Nicki Minaj) are seen as "going too far," underlining a glaring double standard.

4. Being A Feminist Who Is White Does Not Equal Being A "White Feminist"

"Not all feminists who are white are White Feminists," Blay explains. However, most White Feminists are white, because "white people ... don't have to think about things like race on a daily basis," Gray adds. White Feminism-with-capital-letters arises from ignoring the unique struggles faced by women of color, who have to deal with discrimination based on their race as well as their gender. Although this hardly means that all white women lead charmed lives, there's no denying that women of color have entirely different experiences in a culture in which whiteness is held as the norm.

This is where intersectionality comes into play. Formed in response to the exclusive nature of some brands of feminism, intersectional feminism recognizes that not all women have the same experience. Race, sexuality, economic status, and many more characteristics influence our lives. According to intersectionality, there's no "one size fits all" brand of feminism. White Feminism assumes that being white, middle-class, and cisgender is the norm, but intersectional feminists stress the importance of giving women of color — as well as disabled women, LGBT women, and any other women who don't fit the typical mold — room to make their voices heard.

Does this mean white feminists should shut up? Of course not. The answer lies in education, and listening to what other women have to say. On the other hand, sometimes giving women of color space does involve a little shutting up, so white feminists should start spending more time listening than they currently do. There are worse things than yielding the floor to someone with something that needs to be heard.

More like this
Amanda Gorman Shared A Powerful Message On Meghan Markle’s Penultimate Podcast
By Darshita Goyal
Here's How To Support Jewish People Amid Rising Antisemitism
By Hannah Orenstein
Prince William Condemns “Unacceptable” Comments Made To A Black Guest At Buckingham Palace
By Shahed Ezaydi
Here’s Your Daily Horoscope For December 6, 2022
By Mecca Woods
Get Even More From Bustle — Sign Up For The Newsletter