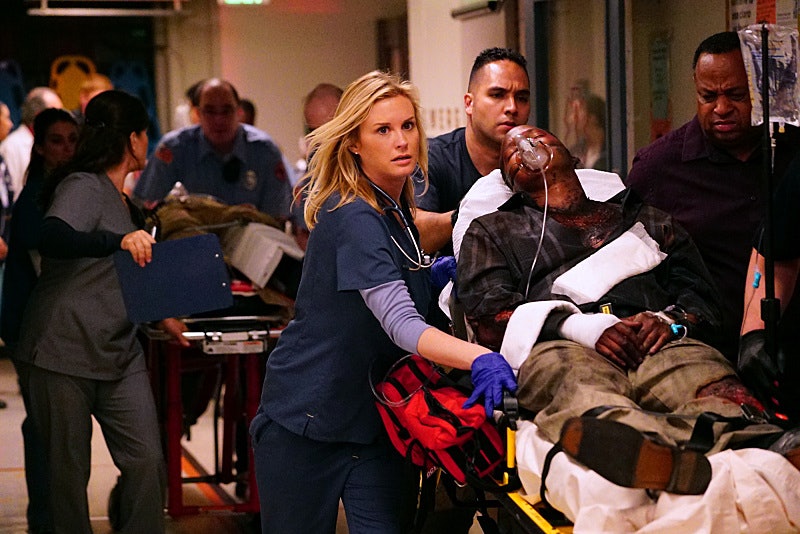 Code Black is CBS's latest foray into the classic television genre of the medical drama. But, unlike many of the others to come before, Code Black is based on a true story, which makes it that much more interesting. The show is inspired by the critically-acclaimed documentary of the same name about one of the busiest emergency room's in the world. And, the series will find success if it can capture the raw, intense portrait of an emergency room that the documentary showed. Other than the change from movie to TV show (as well as non-fiction to fiction), how accurate is Code Black compared to the documentary it's based on?

While a lot of television shows are adapted from other source material, very few of them are based on documentary films. Don't expect a Book Readers vs Show Watchers conflict for this fanbase, as the documentary film is primarily a jumping-off point for the stories told in the television series. Code Black doesn't try to re-tell the documentary, but still hopes to provide an accurate portrayal of what happens in the country's most stressful emergency room.

Here's what fans of the documentary can expect to be different in the TV series:

1. A Lot Of Backstory, For Every Character

While the entire documentary runs about 90 minutes, the television program will hit that runtime after only two episodes, which means the show has a lot of padding out to do. This means that audiences can probably expect to learn a lot about each of the doctors that populate Angel's Memorial Hospital. While the documentary focused briefly on a few of the med students that were learning emergency medicine at Los Angeles County Hospital, the Code Black TV show will be able to dedicate a lot more time to learning about why each doctor is at Angel's Memorial, why they became a doctor, and all their potential hospital romances and friendships.

The Code Black documentary showed that doctors can end up being so caught up in paperwork that they are not able to accurately treat their patients. While this is a very real and troubling issue, there's nothing more boring that can be put on television than someone doing paperwork (Unless, of course, that television show is The Wire which somehow made paperwork compelling). If Code Black is going to show holes in the medical infrastructure, it's probably going to do so through means other than a doctor's struggle to overcome a mountain of insurance forms.

The Code Black documentary dedicated a lot of its time to providing facts and statistics about hospitals in America because communicating numbers and facts is one of the things that documentaries do best. Scripted television series aren't as good at using that in their narratives, but they are very good at tugging at audience's heartstrings. The Code Black television series will focus on telling emotionally-driven stories about patients and the doctors who treat them. The Code Black documentary was emotional as well, but that's because the camera happened to be pointed at an emotional scenario. The TV show will have to make up the drama on its own, and it will probably result in more than a few well-manufactured tear-jerking moments.

While the Code Black TV show looks to be very different from the Code Black documentary, they both have one key thing in common: Hope. The documentary shows a broken, difficult system which seemingly doesn't provide care for all the patients who come through the hospital doors, and yet the doctors still continue to fight for their patients and hope for a future where hospitals have more resources to help a greater number of patients. The television show, similarly, seeks to show how the human spirit can overcome great odds to persevere. No matter what changes between the two, that spirit of hope is the most important aspect connecting these two stories together.

More like this
Gerard Butler Insisted On Adding This Pivotal Scene To 'Plane'
By Catharina Cheung
Jemima Khan Used Her Own Life As Inspo For 'What’s Love Got To Do With It?'
By Darshita Goyal
The Plane Crash In 'Dear Edward' Is Based On A 2010 Tragedy
By Grace Wehniainen
Another Side Of Rupert Grint
By Maria Sherman
Get Even More From Bustle — Sign Up For The Newsletter
From hair trends to relationship advice, our daily newsletter has everything you need to sound like a person who’s on TikTok, even if you aren’t.