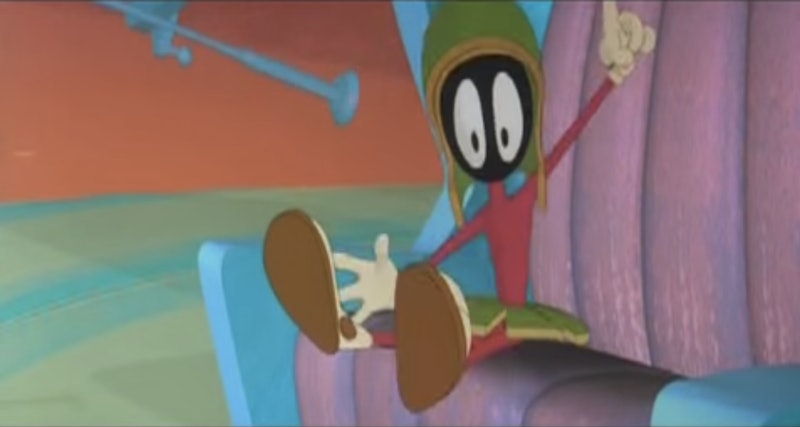 Who's the most excited about NASA's news on Monday that signs of liquid water have been found on the surface of Mars for the first time? Sure, it raises the hopes of E.T. enthusiasts around the world and, yes, researchers are rushing to answer some important new questions. But what about Martians themselves? Water means our favorite (fictional) Martians can now head home — or at least get some respect here on Earth.

A bit on the discovery: Until now we thought the only water on the planet was ice at its polar caps, and liquid water is seen as a building block of life. Back in 2011, scientists saw dark streaks appearing in photographs of the planet's steepest slopes, for example, a crater hole. They increased during Mars' summer and decreased during the planet's winter. At the time, scientists expected water was the culprit. The study published Monday by Nature Geoscience points to the existence of hydrated salts in these areas. What are they? Well, these salt structures are a big deal! They prove that water has recently been flowing in the area.

So, like I said, our favorite fictional characters have the most to gain from this discovery: credibility. What alien can be taken seriously when its home planet can't support life? Is there life on Mars? While scientists begin asking that very question, some Martians can already benefit from the speculation.

Doesn't he look a little too human? Well, he is, but his family descended from the settlers of the first human colony on Mars. In the film Star Trek: Generations, he explains his ancestral past. Hopefully, future Earthling-Martians will be treated well by natives of the planet — although assuming colonization by humans plays out in outer space like here on Earth, we probably need to be more worried about the natives.

Sailor Moon fans will recognize Sailor Mars as the bestie with fire powers. She is descended from actual warlike Martians who were descendants of the Greek god Ares. Although she lives a double life as a school girl in Japan, there's no reason Sailor Mars couldn't try to reconnect with her ancestry.

This guy is not just a referee for the NBA. Despite his role in Space Jam, there's more to this little guy than basketball shoes. Notice that his hat borrows from the style of the Roman god Mars, and he often arrives in a spaceship. It might be good to send him back home, since his goal was to destroy Earth. We'll probably be able to hear him as he heads back, "Where's the kaboom? There was supposed to be an earth-shattering kaboom!"

4.) Ice Warriors From Doctor Who

Forget that Mars can reach a pleasant 80ºF on a summer day and think Ice Warriors. They are reptiles from Mars and reoccurring villains on the British series Doctor Who. They were first encountered by Doctor Who in 1967 but were brought back in 2013. The current iteration's designer Neill Gorton said the 2013 version is "beefier and stronger." With their new "armour-plating" and "bodybuilder physique," it's about time we give them some space. The distance to Mars is on average about 140 million miles.

Yes, I know that Elton John is from England. And technically Rocket Man is from planet Earth, too. But if you think back to the lyrics, Mars is where he was headed.

Mars ain't the kind of place To raise your kids In fact, it's cold as hell And there's no one there to raise them If you did

And I think it's gonna be a long, long, time 'Til touchdown brings me 'round again to find I'm not the man they think I am at home Ah, no no no... I'm a rocket man Rocket man Burnin' out this fuse Up here alone

If further signs point to life on our neighboring planet, manned missions will surely follow. In 20 years these lyrics could describe the feelings of the first Mars-bound crew.