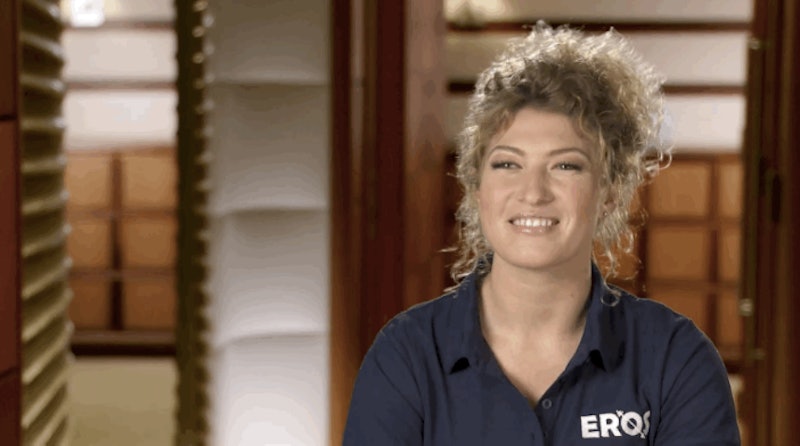 Acknowledging the camera while a documentary crew is filming you is a faux pas, unless you are Jim from The Office. Of course, the big exception to that is talking head interviews, when stars are supposed to speak directly to the camera. That's why it's so odd when the new stew on Below Deck, Rocky, doesn't look at the camera during her interviews. At all. Ever. Rocky's super all over the place in every way, but what on Earth is possessing her to never look the camera in the eye? I'm sure there's an explanation — even if it's a strange one, like her love of mermaids means that she thinks the camera will steal her soul or something. I'm only kind of kidding... that does feel like a very Rocky type of thing to say, accompanied by one of her distinctive loud laughs.

The weird thing is, Rocky seems totally against the idea of looking at the camera, but she's happy to look any and everywhere else. She's stared at the ceiling, looked behind her, had massive eye-rolls, and even had whole conversations with an invisible person off to the side. Seriously, here's the proof, from Season 3's "I'm Ironing the Captain's Shirts."

When Discussing Her Need For A Real Man

This one kind of makes sense, because you can sense Rocky's palpable desperation for someone with better game than Emile to flirt with.

Like a scene right out of Les Mis. Clearly, this was Rocky's way of demonstrating the crushing weight of all of her laundry work.

And When She Transformed That Work Into A Musical

Rocky is so shocked and amazed by her own genius that she literally is looking into another dimension.

Here, I'm assuming that after watching her do her performance, everyone in the room scattered in order to avoid flying sheets, so she's just trying to make eye contact with her audience all at the same time.

Dane's smile makes Rocky think of the right, while his height is on the floor, and his hairrrrr is to the left. Dane's good qualities are all over the place.

When Money Was On Her Mind

Literally a blur. I don't think there is an explanation for this one. She was pretending to be a mobster, and the whole thing just got away from her.

Rocky's Scarface impression came complete with accent, but no eye contact for the camera.

I mean, I understand why Rocky can't even look at the camera right now. She is probably scouring the set for a glimpse of Dane so she can kick his butt for not being clear about whether he has a girlfriend.

Wait, She Kind Of Looked At The Camera!

Yes, it's slightly off to the side. But that's as close as she's ever gotten to making eye contact with the camera. And she looks... kind of scary. You know what? I think Rocky should keep staring way off to the side during her Below Deck interviews, if that's what she so chooses.