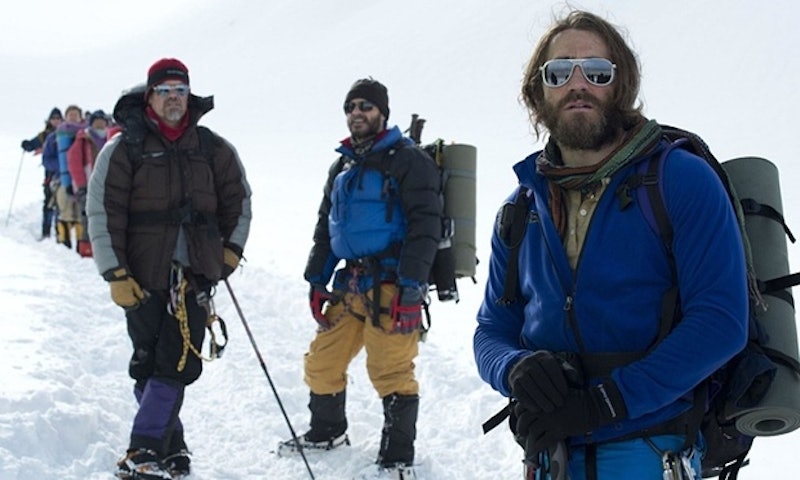 The new disaster thriller Everest features an A-list cast in a dramatic recreation of the legendary 1996 Mount Everest disaster. The film stars Jake Gyllenhaal and Jason Clarke as Scott Fischer and Rob Hall, who were the expedition leaders of the fateful climb. Everest has a gripping narrative and insane special effects, which make the dangers of the elements feel scarily real. But it's still a fictional movie, so it can't totally capture the reality of the catastrophe. Thankfully, there are plenty of photos of the real Everest disaster to tell us what it was like on the mountain that day.

On May 10, 1996, multiple different expeditions were attempting to reach the mountain's summit when a massive storm hit. Unable to get back down to safety at the base camp, several climbers found themselves stranded at high altitudes in frigid conditions and with dwindling oxygen supplies. By the time the storm cleared, eight people had died, including both Hall and Fischer. Others survived with various injuries, such as frostbite, as a result of exposure. Among the survivors was journalist Jon Krakauer, whose book Into Thin Air examined the tragedy in great deal. Here is a photographic look at the journey that led to disaster on Mount Everest almost 20 years ago.

The Adventure Consultants, led by guide Rob Hall (in purple), was one of the expeditions attempting to scale the peak.

Some of the climbers, such as Scott Fischer and Anatoli Boukreev, were well-known in the climbing world and already had a wealth of experience prior to the 1996 expedition.

The expeditions also included some inexperienced climbers, which Jon Krakauer and others believe contributed to the disaster. Socialite Sandy Hill Pittman, in particular, received criticism for her involvement.

Trying to descend the mountain during the blizzard was a perilous endeavor even for the most experienced climbers, and those who were safe at base camp had no way to physically reach them.

Rob Hall was able to speak over radio with the expedition members at the base camp while he was stranded. He was also able to speak with his wife, and told her goodbye.

Beck Weathers suffered severe frostbite, leading to the necessary amputation of several of his extremities. However, he survived both the disaster and the subsequent surgeries and wrote a book about the expedition.

Jon Krakauer has since spoken out about the many mistakes that led to an unnecessary loss of life on the mountain.

The 1996 Mount Everest disaster was a truly horrific set of circumstances with grave consequences. Everest attempts to show both the devastation of the disaster and the courage of the people involved. However, not everyone approves; Krakauer has also spoken out against Everest 's depiction of the events and says that the real story was much different. We may never know the full truth of what happened, but the photos from the expedition paint a haunting picture.

More like this
The 'Jurassic Park' Cast, Then & Now
By Arya Roshanian
Everything To Know About Netflix's Marilyn Monroe Movie 'Blonde' Starring Ana De Armas
By Grace Wehniainen
Eurovision 2023 *Might* Be Held In The UK
By Sam Ramsden and Rachel Mantock
Taylor Swift's “Carolina” Theme For 'Where The Crawdads Sing' Soundtrack Is Here
By Jake Viswanath
Get Even More From Bustle — Sign Up For The Newsletter