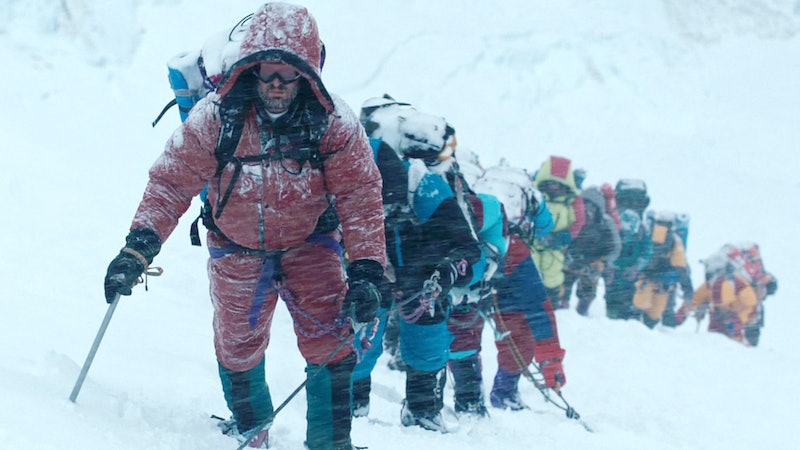 Survivors of the 1996 Mount Everest climbing disaster are members of a special fraternity. These climbers and guides — who are all portrayed in the new fictionalized account of the ill-fated venture, Everest — have had to make their own decisions about whether to be vocal about their experience or to move on completely. On Sept. 18, they’ll have the opportunity to see what director Baltasar Kormákur and an ensemble that includes Jake Gyllenhaal, Jason Clarke, Keira Knightley, and Josh Brolin have done with their stories when Everest opens in theaters. It’s been almost 20 years since the events of the film. Where are the Everest survivors today?

Of the two expeditions that were caught in the blizzard of May 10 and 11, 1996, eight lives were lost. Many individuals who made it off of the mountain alive either refuse to continue commenting about the events of those days or simply slipped back into private lives. Others, meanwhile, haven’t drawn away from the association. They’re writers, public speakers, doctors, consultants, and journalists, and they’ll often speak freely about the physical and emotional trial that changed their lives. Here’s what eight of those survivors are up to today.

A guide on the Adventure Consultants expedition in 1996, Groom has channeled his love of adventure and will to triumph over adversity (including losing portions of both feet due to frostbite) into a career as a motivational speaker and consultant. On his personal website, he throws his support behind the phrase "no pain, no gain," and trust him, he knows what he's talking about.

Famed journalist and non-fiction writer Jon Krakauer was on the Everest climb on assignment for Outside magazine. After the initial article on the tragedy was published, he returned to the material and to interview survivors for a full-length book, titled Into Thin Air. His most recent book is Missoula: Rape and the Justice System in a College Town.

In 1996, Beidleman was a guide on the Mountain Madness expedition. Now he's an inventor, engineer, skier, runner, and holder of over a dozen patents, including one for a titanium road bike pedal. He lives in Aspen, Colorado.

Like Groom, Gammelgaard also embarked on a life of public speaking and appearances as the head of her own consulting company. Her focus is on helping companies "establish leaders" and one of the tenants of her method is fittingly called "The Everest Way." She's also an author, having written both about her survival of the 1996 climb and her take on the business world.

Kasischke also wrote a book about his experience titled After The Wind: The 1996 Everest Tragedy, One Survivor’s Story. He served as a script adviser on Everest and is a resident of Harbor Springs, Michigan.

With the injuries that Weathers endured on the mountain, survival seemed nearly impossible. After several amputations and reconstructive surgeries, the pathologist resumed normal life as a speaker, writer, and family man. He credits the disaster for saving his marriage, now 39 years strong. Robin Wright plays his wife Peach in the film.

Now known as Sandy Hill, the former climber is a regular on the social pages, a former fashion editor, and a lifestyle and travel author.

Dr. Hutchison is a clinical professor of Cardiac Sciences at the Libin Cardiovascular Institute Of Alberta. He periodically give lectures specifically regarding safety and medical care in adventure situations, something he has practiced quite often personally.

Remember these real people when you see Everest, as well as the climbers who weren't lucky enough to make it home.