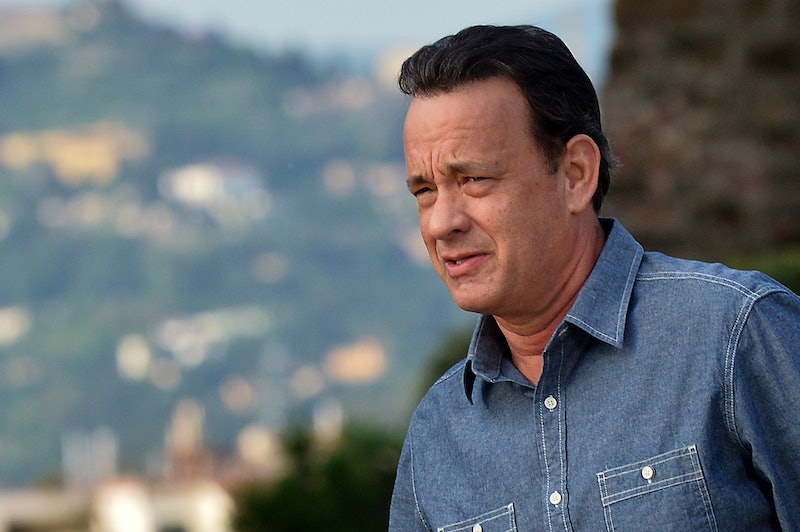 Earlier this month, while wearing the most beautiful lace covered Oscar de la Renta gown, Girls star Allison Williams married longtime boyfriend Ricky Van Veen and shared what has to be one of the prettiest wedding photos in the history of wedding photos on Instagram. And judging by that photo alone, you'd know that their wedding had to have been amazing — and now, there's even more proof. If you can believe it, Tom Hanks officiated Williams' wedding, and from the way he talks about it, it sounds like it was no big deal.

While talking to Extra this week, Hanks revealed that not only did he preside over their marriage, but it only cost him $35 to do it. Not too shabby! And not surprising that Hanks was part of their ceremony, either, since he's good friends with Brian Williams, Allison's father. And another fun family tie: Hanks' wife, Rita Wilson, frequently guest stars as Williams' mom on Girls, so Hanks couldn't have been a more perfect choice for the job.

"If you want to call me the Right Reverend Hanks, I think you should. I'm for rent," he said. "If you can afford the honorarium, I'm there for you."

And although Hanks is probably one of the best choices for a wedding officiant, he's hardly the first celebrity who was up for the task. In fact, tons of other celebs have stepped up to the plate for their pals on their big day, and if you (like me) wish you could attend Hollywood weddings, the FOMO is about to get so real.

When Adam Levine and Behati Prinsloo tied the knot last year, Hill was the one to marry them — and from what wedding guests have said, he did a pretty good job. Apparently, he was hilarious (not too hard to believe) and according to witnesses, when he wasn't telling jokes he was saying very sweet things about the couple.

Survivor host Probst presided over Jenna Fischer's wedding to Lee Kirk, even though he was actually supposed to be in Nicaragua hosting the show at the time. That's friendship.

If I was going to choose someone to officiate over my wedding, Stone would be it. In 2012, when her publicist married the director of her movie, Gangster Squad, Stone was totally there for them, which is extra cute since she was the one who introduced them.

What happens when the officiant you'd chosen cancels on you? Ask Jason Segel to do it, of course, which is exactly what a couple of his fans did after the person who was supposed to marry them pulled out and they found out about it while watching Segel's movie, Forgetting Sarah Marshall. Surprisingly enough, he agreed, and he actually ended up doing the ceremony on Late Night with Jay Leno, which is clearly a very epic way to start your lives together.

When Kesha's makeup artist tied the knot earlier this month, she was more than happy to do the honors. And thanks to this Instagram post she shared from the moment, we know it was adorable.

If these celebs are for hire, I'm definitely interested. What are the chances I can convince Beyonce to get ordained?