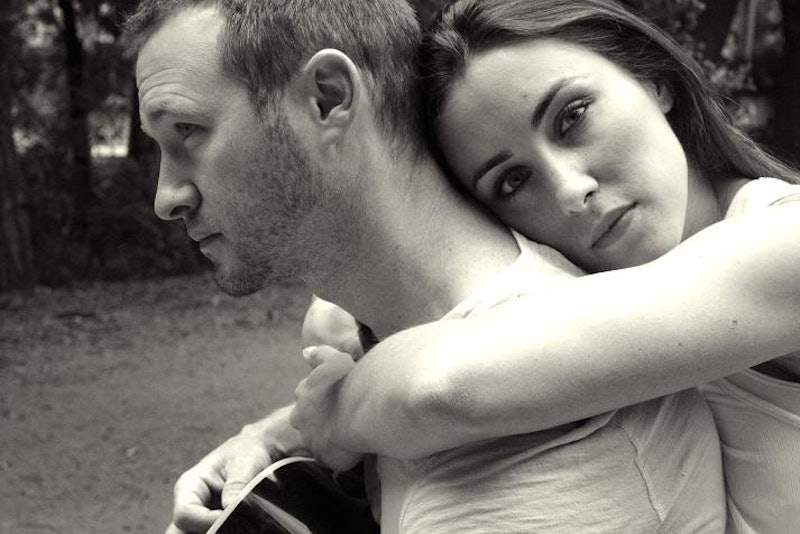 Frequent fights with your partner just aren't necessary. If you're settling in for another Thursday night at home with your partner and your fourth wicked argument of the week breaks out, bad communication is definitely in the mix. This much is for sure, but how much of what you hold to be real about fighting is actually just a myth that you, your partner, your family of origin or a combination of all three have perpetuated for far too long? There are facts, and then there are longstanding myths about fighting in relationships, says Tina B. Tessina, Ph.D., aka Dr. Romance. These myths, she says, may have arisen in your childhood and been sustained by incorrect belief systems and behavior patterns that many of us hold onto for years. But the cycle can be broken, says the psychotherapist and author of 13 books in 16 languages, including Money, Sex and Kids: Stop Fighting about the Three Things That Can Ruin Your Marriage.

As with anything else, the first step is recognizing that there's a problem in the first place. Dr. Romance, based in southern California, has 30 years of experience in counseling individuals and couples, so she knows a thing or two about a nasty argument. One thing is certain: "Fighting causes couples to say things they don't mean, to lash out and try and hurt each other," she says. "These hurts can be long remembered, and keep coming up, so any fight can cause a long-running problem."

There's a silver lining to all of this, though. "In my counseling practice, couples are often surprised to learn they can communicate and solve problems effectively without fighting," she says, though she adds a caveat: "Sometimes you may find it's not so easy to give up your struggles." If you've been fighting with your partner for years, you'll likely have some trouble putting down your sword. "You may have trouble letting go of the fighting habit because of two factors: social expectations (expectations the people around you have about marriage [or relationships in general]) and myths (common beliefs not based on fact)."

In terms of the social expectations, it turns out that quarrels do not have to be synonymous with LTRs and marriage. Moreover, there are many substantial misconceptions about conflict. Here are eight — plus five basic guidelines for avoiding such feuds.

Myth #1: Fighting Clears The Air And Brings Out The Truth

Let's get this straight: "Fighting is not necessary to 'clear the air,'" says Dr. Romance. "Getting heated up does not make you tell truths you wouldn't tell otherwise." Instead, you might say something that you don't really mean in a row — and some statements can't be unsaid. "What happens when couples fight and get emotional is that both parties say things they don't mean, or say them in much nastier ways than is really true," she says. "It is possible to discuss anything that is or is not happening between you in a calm and logical manner that will lead to more truth-telling and air-clearing than fighting and arguing will ever accomplish." So, if you're upset about something — whether it be dirty socks on the floor or something your partner said that hurt your feelings — bring it up to them calmly, and talk about it like the two rational adults that you are.

By "let it all hang out," Dr. Romance means "be as emotional as you want, and say things you'd never say to a friend or a boss." Nope. Not OK. We don't "get" to say whatever the eff we want to our partner or other family members — and "get" isn't really the right word here anyway, as "get" implies some sort of privilege, and it's really not a privilege to yell and scream and be a crazy person. "Whether you're fighting or not (or drunk, or upset), you're still responsible for everything you say and do," Dr. Romance says. "The hurtful or mean or outrageous things you say will be remembered by your spouse [or partner] or the other family members who hear them." Do unto others as you would have them do unto you, etc. Just don't be an irrational jerk, and you'll pass this one with flying colors.

"You always have a choice about your behavior and how you express yourself," Dr. Romance says. That said, just like any other patterned behavior, it's possible to develop a "fighting habit," she says. If you've cultivated one of those, "or never learned to control your temper, you may need to do some work, but you can learn to behave differently," says Dr. Romance. It might take a good, hard look at yourself — and/or a good therapist — but breaking such routines is totally doable.

Myth #4: My Partner Makes Me Fight — They Yell First

"No one else is responsible for your behavior," says Dr. Romance. Even if your partner is a total crazy person, they can't "make" you yell back. And the converse is true too: "You are not responsible for anyone else's words or actions," she says. So if you're feeling provoked, you have the choice to remove yourself from the situation by taking a walk or asking for some alone time. If your partner refuses this, you might be in an abusive relationship, and that is never OK. "You can always choose not to yell back, to speak calmly, or to leave the room," Dr. Romance says. "Your partner cannot fight alone."

Myth #5: Any Time We Get Angry, It's Natural to Argue And Yell

This is just a plain old lie that some people tell themselves. "Arguing and shouting is not the only way to express your anger," Dr. Romance says. "It's just the most dramatic way." But when you carry out histrionics instead of being serene about an issue, you're shooting yourself in the foot. "As a matter of fact, it's the least effective way to reach a solution for whatever is making you angry." If you're feeling steamed, wait until you're tranquil to discuss a problem. There's a much better chance that you and your partner will come to an amiable solution if you're both level-headed when a disagreement hits.

Myth #6: It's A Family Trait — Everyone In My Family Argues

Some of us grew up in households where huge blowouts were the norm. But that doesn't mean we need to carry that into our current relationships. "Fighting, temper tantrums and arguing may be common in your original family, but it's not genetic, inherited or inevitable," says Dr. Romance. "It's still learned behavior, and it's a dysfunctional family trait." Just like a fighting habit that can be broken with some work, this too is a habit, Dr. Romance says, and it doesn't have to haunt you for the rest of your life. "You can overcome it for the benefit of your spouse [or partner] and children," she says. And for yourself — no one is happy amid chaos and angry uncertainty.

Myth #7: It's OK To Yell, Shout, Curse, Throw Things And Hit Walls, As Long As I Don't Hit A Person

Dr. Romance doesn't mince her words here: "These raging behaviors are classified as emotional abuse, which is just as damaging to families as physical abuse." If you're in a partnership in which one or both parties acts out in this way, seek help. "Evidence of emotional abuse is enough to have your children detained by child protective services in many states, and can even cause a raging spouse [or partner] to be hauled off in handcuffs, if a problem is reported and the police arrive to witness the behavior," she says. "I tell clients who are behaving this way to separate until they get their anger under control, which requires anger management classes or therapy. If this is happening in your house, it must be stopped now — get counseling right away." The sooner the better in cases like this, as the health and sanity of yourself, your partner or any children is at stake.

Myth #8: Fighting Is A Necessary Part Of Being A Couple

Couples will disagree. Arguments will happen. But they don't have to be terrorizing showdowns — they can just be small squabbles, in which both partners express their concerns. "Couples come into my office frequently believing that fighting is a necessary part of being a couple," Dr. Romance says. "But the fact is that fighting accomplishes nothing, and it isn't necessary for couples to argue, to yell or to have heated discussions to get problems solved." This is a chance to let go of old ideas, and welcome new ones. Beware, though: Old ideas can die hard, and you might need to solicit outside help in the form of a friend, therapist or even a really good self-help book to put such outdated concepts to rest. Whatever you have to do, do it: "Hanging on to these ideas makes it difficult to let go of fighting," says Dr. Romance.

Now that your long-held notions about fighting have been crushed, how to change your customs — and change your life? "Squabbles often occur because you're following automatic habit patterns that lead to a problem before you know it," says Dr. Romance. The following guidelines, she says, "will help you overcome negative habit patterns you may have built that lead to arguments or bickering," and "make your discussions more productive." Score!

As always, it takes two to tango. "Disagreements always require two people," Dr. Romance says. "If you don't participate, your partner can't argue without you." Go for a walk, ask for a time-out or develop some other agreed-upon cue to put the fight on hold. "If the issue arises at an inopportune time, you can just find a temporary resolution (temporarily give in, go home, leave the restaurant) and wait until things calm down to discuss what happened (the squabble may just have been a case of too much alcohol, or being tired and irritable)," she says. Later on, revisit. When you do, discuss what to do if it happens again, she advises.

If there's an argument that you have often, perhaps it's time to put it to rest. "To resolve recurring problems, discuss related decisions with your spouse [or partner], and find out what each of you does and does not want before making important decisions," says Dr. Romance. Communicate, communicate, communicate.

As they say, it's better to understand than be understood. "Make sure you and your partner understand each other's point of view before beginning to solve the problem," Dr. Romance says. "You should be able to put your mate's position in your own words, and vice versa. This does not mean that you agree with each other, just that you understand each other." So try making a statement, and asking your partner to mirror back what they hear. It's an interesting exercise — and might reveal some important truths about your relationship.

Solution #4: Solve It For The Two of You

"Come up with a solution that works for just the two of you, ignoring anyone else's needs," says Dr. Romance. "It's much easier to solve a problem for the two of you than for others, such as children, co-workers, friends and family. After you are clear with each other, discuss the issues with others who may be involved." If you're on the same page with your partner, everything will go smoother from there.

Solution #5. Talk to Others

"After you've solved it for the two of you, if extended family members or friends might have problems with your decision, talk about what objections they might have, so you can diffuse them beforehand," Dr. Romance says. "Discuss possible ways to handle their objections." If you're proactive, open-minded and honest, you've got a chance of letting go of your armor — and putting any habitual arguing to rest.