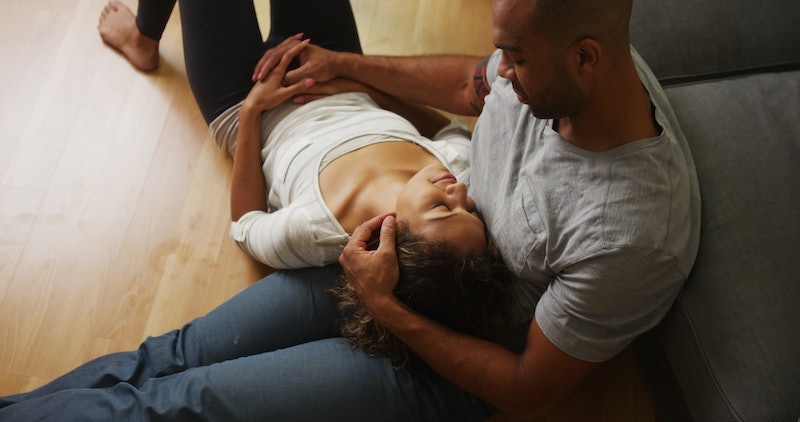 There's nothing worse than being in a relationship where arguments spiral out of control so fast that soon you're fighting not only about who's doing the dishes tonight, but also about the time you forgot to buy his mother a Christmas card two years ago. The key to the healthiest, happiest, most successful long-term relationships is a knack for communicating effectively, because it helps you solve problems with minimal damages to each other's feelings.

The problem, of course, is that every relationship is unique, and every couple communicates differently, so there's no one "correct" answer for how to communicate best. It's especially difficult if two individuals in a relationship have totally different styles of communication: If you're open with your feelings and your partner tends to bottle theirs up, it can seem impossible to solve problems in a way that is comfortable for both parties.

However, it is possible to reconcile these differences, and find a happy middle ground that allows you both to express emotions and resolve arguments quickly and without much headache. Here are seven simple hacks to help you communicate better with your partner — it's not rocket science, but they can seriously change how you look at things.

Eyes are the window to the soul...and the key to communication that feels honest and sincere. A 2012 study found that increased eye contact is associated with credibility, so if you're having an argument and your significant other accuses you of lying, the way you use your eyes can help back you up. (Be careful not to stare, though, because researchers also found that gave off an air of hostility.) It might be a natural instinct to look away from someone when you're upset and don't want them to see how much you're hurting, but looking away only makes you seem shady or dishonest. The intimacy and sincerity of making eye contact during an argument can really go a long way when it comes to fixing whatever the problem is.

How you carry yourself can really influence how others perceive you. If you're arguing with someone and have your legs or arms crossed, you'll seem closed off, and less likely to negotiate — both things that could be detrimental to resolving a conflict. The same goes for turning your body away from the person you're arguing with: You seem like you're actively moving away from conflict, rather than opening yourself to the possibility of fixing things. I'm not suggesting you cuddle with your partner while you're fighting, but being aware of how gestures you're using can make things less hostile.

Sometimes the biggest problem can happen accidentally: You say something that sounds accusatory, and your partner goes on the defensive, and things quickly devolve. In order to avoid that, try to focus on describing how you feel: "I was hurt that you were late to my work event," or "I am angry that you canceled on me again, because it makes me feel unimportant." A lot of times the underlying problems get lost in translation: Tempers flare, and the larger issue is buried underneath anger and tears. If you focus on expressing how something made you feel, your partner is less likely to dismiss you for getting upset over "something dumb."

4. Have Weekly Meals Together

If you're in a LTR and have a routine that consist of Netflix, Seamless, and going to bed, adding a set night to cook (or go out for) dinner together is an easy way to give the two of you a specific time to talk, sans distractions. While you might chat during the latest episode of Scream Queens, it's not the same thing as taking two hours to really talk — not that it should turn into an argument, but it gives you a space to talk about anything that's been on your mind.

It's 2015, so you better believe there's an app for that. With apps like Couple — which lets you and your significant other update each other on day-to-day activities as well as plan for the future — you can communicate about even the most trivial or mundane things, like grocery shopping, while maintaining a sense of intimacy. Couple is especially useful for long-distance relationships, because it helps you stay connected from miles apart, reducing some of the strain of feeling like you're not really involved in your long-distance partner's life.

6. Put It In Writing

This is especially useful if you or your partner is introverted or has trouble verbally expressing emotions, or if one of you has a short fuse and tends to get irrational while fighting. If you take the time to write out your feelings, you can say exactly what you mean and avoid accidentally saying something hurtful. If a lingering argument is on your mind, write a letter (or email) that details exactly what you're feeling, so your partner has no doubts about what the issues are. Afterwards, a calm, rational, two-sided discussion might be a lot easier.

This might sound obvious, but being totally open and honest with your partner will help you avoid lots of miscommunication. As hard as it can be to tell the truth, there's nothing to be gained by covering something up to avoid confrontation: I guarantee that the issue will only come up again later, and it will be much worse at that point than if you'd tried to fix it right away. A recent survey found that 70 percent of people named honesty as the most important aspect of a relationship. If you have problems communicating, the first step you can take is to make sure you're being transparent, honest, and open with your feelings. Lying in order to spare your partner's feelings sounds noble, but will create more problems than you need if it becomes a habit.

More like this
How Ovulation Affects Your Sense Of Smell, Libido, & More
By JR Thorpe and Lexi Inks
I Spent 2 Years Trying TikTok’s Dating Advice
By Kailynn Johnson
Why Being “Too Sensitive” In Relationships Is A Good Thing
By Lexi Inks
Why Blake Lively & Ryan Reynolds Seem Like A Perfect Match, According To Astrology
By Nina Kahn
Get Even More From Bustle — Sign Up For The Newsletter
From hair trends to relationship advice, our daily newsletter has everything you need to sound like a person who’s on TikTok, even if you aren’t.