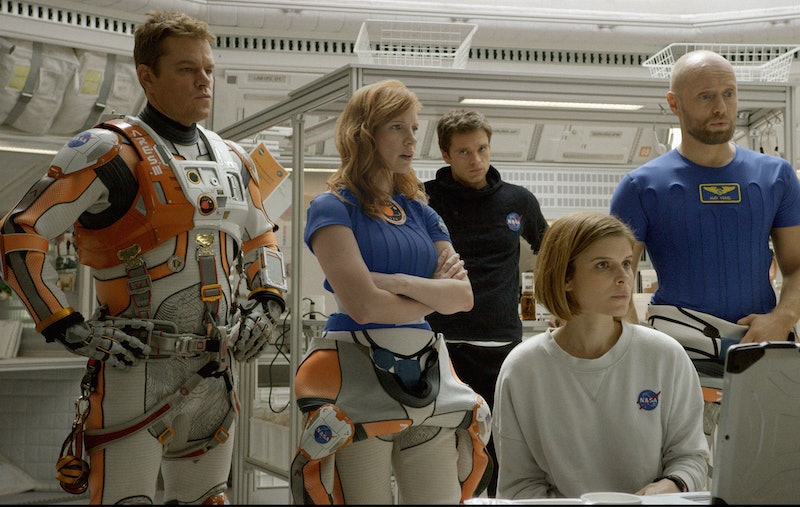 Once in awhile, a movie comes along that unexpectedly has so much acting talent that it's hard to believe the filmmakers wrangled so many awesome stars in one place. The Martian is one of those movies. The IMDb page for the film is essentially a hotlist of actors, from Matt Damon to Jessica Chastain to Jeff Daniels. Usually, a cast with this many A-list names raises some eyebrows, with some assuming it's just stunt casting. Yet not this film — The Martian cast is allowed to use their talents to the fullest extents, and they make for some serious entertainment. In other words, they aren't there just to look pretty.

The film's cast is huge for a very good reason — the movie is about a space crew and NASA trying to save a man stranded on Mars, and you need a very strong ensemble to pull that off. Like the real-life NASA, there are plenty of moving parts needed to deal with trouble in space, so it just makes sense that the movie employs what feels like every famous actor on the planet. And they're all used wisely; in The Martian, no actor is left in the background chewing scenery. Scott manages to wow viewers with the way he juggles the characters and makes each role as important as the next. It recalls other great ensemble movies like The Poseidon Adventure, MASH, Ocean's Eleven and Traffic.

Here is the complete squad of actors that make The Martian the Hollywood spectacle it's destined to be. Minor spoilers to follow!

You could consider him the "star" of the movie, but he isn't a camera hog. It doesn't seem like the "Matt Damon Show." He's also one of many people on this list with a comic book movie connection. Although he is not directly in a comic book movie (yet), his BFF, Ben Affleck, is the next Batman.

The Zero Dark Thirty star is the leader of the space pack. She has a passion for disco music (which is a running joke throughout the entire movie). Her comic book connection? She has been rumored to play Captain Marvel.

The Academy Award nominee plays the doctor leading the charge on Earth to get Watney home. You can also see him stepping into the Marvel Cinematic Universe in the forthcoming Doctor Strange.

His part as the tough-as-nails head of NASA reflects his role on The Newsroom.

We know him as the late Eddard Stark, but in The Martian he's the flight director — and unlike his Game of Thrones character (and many past roles he has played), he survives!

He can rap, act, and in The Martian, he is a super genius who practically saves the whole mission.

You enjoyed him in Ant-Man, and now you'll enjoy him even more as the crew's pilot.

We'll probably see more of the Norwegian actor after his role as the resident chemist of Watney's crew.

Yup. That's the Winter Soldier playing the crew's flight surgeon. You probably didn't recognize him without his silver super-arm.

If you couldn't get enough comic book connections, here's another one for you. Fantastic Four's Invisible Woman plays the resident tech wiz.

With a cast as star-studded (and super-powered) as this, it's no wonder The Martian is poised to be one of fall's best blockbusters.