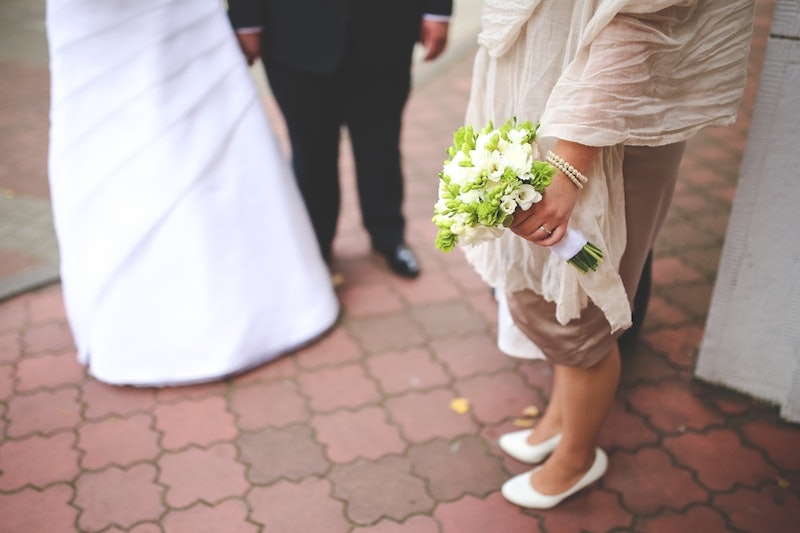 Being a bridesmaid is a huge commitment. It takes a lot of your time, money and energy, all dedicated to making someone else happy. If you don't want to be a bridesmaid, it can be a nightmare, even if it can be an amazing and fun experience if you want to do it.

Who could forget Katherine Heigl in 27 Dresses when she was a bridesmaid 27 different times? The obvious underlying moral of that movie is that her character had a real problem saying no. And who could blame her? If someone asks you to be in your wedding, they clearly think of you as one of the closest people in their lives, and want you to share their special day with you. But what do you do if you really, really don't want to do it? Saying no to being in a friends wedding is awkward, uncomfortable, and if gone about in the wrong way has the potential to destroy a friendship.

In a telephone interview with me, Jen Glantz, author of Bridesmaid for Hire, offers seven tips for saying no to being a bridesmaid in order to make sure you won't lose your friend in the process.

Before you say yes to being a bridesmaid, especially if you’re not 100 percent sure about it, take a few days (but only a few days — otherwise it’s rude) and survey your personal life. What do you have going on in your personal life? If you have your own huge changes happening, like changing jobs or getting engaged, saying no is probably in the best interest of both you and the bride. If you have so much going on in your own life that you won’t be able to be a good bridesmaid, let your friend know — she won’t want a bad bridesmaid, either.

If you know you 100 percent need to say no, you need to do it as soon as possible, says Glantz. Yes, it’s awkward (hopefully with these tips it will be a little bit more manageable) but do it as quickly as you can — think of it like ripping off a Band-Aid. Dragging it out won't make it any better, and will ultimately annoy your friend if you lead her on.

3. Find Out How Much It’s Going to Cost You

If you feel like you need to say no for financial reasons (being in a wedding has gotten to be so expensive), find out realistically how much it’s going to cost you to a member of bridal party. Glantz advises talking to the maid of honor, who probably has the best idea of how much money you'll need to throw down for events like the bridal shower and the bachelorette party. Ask if you can sit out of these events, and be honest about how much money you really are able to spend on being in the wedding. If it really is something you can't afford, it's OK to be honest about it.

4. Go About It With Kindness

This should be a given, but people can get real bridesmaid-zilla in these awkward situations. Even if you don’t think of the bride as one of your besties, she has clearly decided you mean a lot to her (as in, enough to be a part of the most special day of her life) and deserves to be treated with respect.

5. Think About What's Best For Your Friendship

Nobody wants a bridesmaid with a bad attitude. Glantz advises that if you won’t be able to fully commit, and be happy and excited about being in the bridal party, you’re better off saying no. Remember Kristen Wigg's complete meltdown about being in her friend's wedding in Bridesmaids? If you can't handle it, just don't do it. In the end, it will be better for your friendship to say no from the start.

According to Glantz, honesty is the best policy... Sort of. Say something along the lines of, “Thank you so much, but I don't think at this time I could do that role to the best of my ability and I don’t want to let you or the rest of the bridal party down.” You don't have to say why you don't feel like you can do the role to the best of your ability (as in, don't tell her "because I don't want to") but this way you're not misleading her or saying anything outwardly hurtful.

7. Offer To Help Out In Other Ways

If you can’t (or don’t want to be) in the wedding party, there are other ways to show your support for the bride and the couple. Find a skill you're good at, address your availability leading up to the wedding, and offer up your help in that area. For example, if you’re really good at crafts, offer to DIY something for the reception. Or if you’re the fashionista of the friend group, offer to help with dress fittings. Everyone has something to offer and it will inevitably mean a lot to your friend if you’re there for her in some way before, during or after her big day. If all else fails, tell her you'll help choreograph a dance, a la the Bridesmaids finale.

As long as you go about saying "no" in the right way, your friend will still be your friend. Make sure she knows how much you love her, and do yourself a favor and have realistic expectations about what her answer before asking her to be in your wedding.

Saying no to being a bridesmaid isn't the end of the world, even if it is a little awkward. Just take a deep breath and be honest, and you and the bride will probably be better off.

What is it like to be a professional bridesmaid? Find out how one woman copes with being a bridesmaid for hire below, and be sure to subscribe to Bustle's YouTube page for more videos.