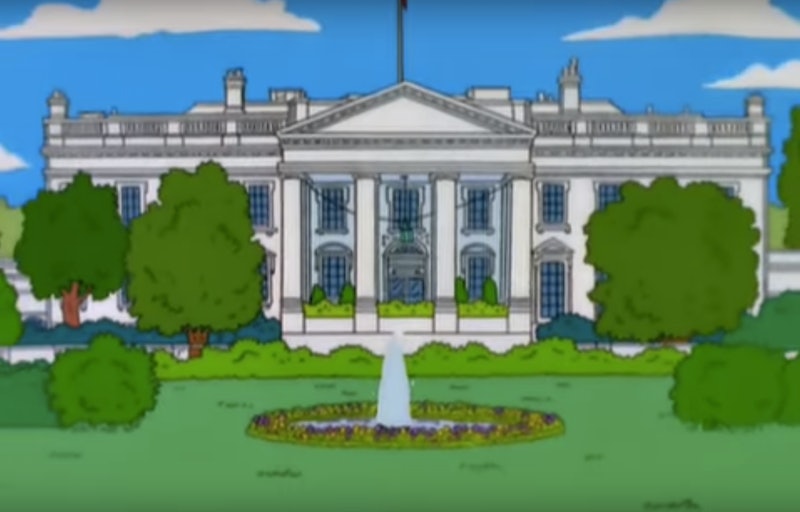 When you're a comedy TV show that runs for a staggering 27 seasons (at least), you're bound to run into some jokes that look downright brilliant in retrospect, even a little predictive. And that's exactly the nature of the relationship between long-running FOX show The Simpsons and a certain presidential contender on the Republican side — The Simpsons saw Donald Trump winning the White House, and needless to say, it didn't go over that well.

It all dates back to an episode that aired in 2000, during the show's 11th season, entitled "Bart To The Future." It was a flash-forward episode, showing the decades-on future of 2030, when things have broken very differently for the eldest Simpson siblings. As you might expect, Lisa turns out the better of the two — while Bart is a broke, beer-swilling musician performing nights in a sleazy, raucous bar for free popcorn shrimp, Lisa has successfully become President of the United States (in a press conference, she describes herself as the country's "first straight female president").

But she's inherited a headache of a budgetary situation from her predecessor — yep, you guessed it, President Trump. Here's a short clip of the Trump reference, which was about as on-point as it gets.

Lisa asks Secretary Van Houten (a grown-up, balding Milhouse) to lay out the country's financial state. And as it turns out, it's not great.

Lisa: As you know, we've inherited quite a budget crunch from President Trump. How bad is it, Secretary Van Houten?

Lisa: The country's broke? How can that be?

Milhouse's answer is that the last administration invested in the nation's children, a seemingly disastrous mistake. And while that might not be what you'd expect from a Trump presidency — education policy hasn't been a huge priority in his campaign, at least not to this point — there is a delicious quality to the idea that Trump left America is dire financial straits. After all, he's building his political brand on the strength of his business acumen, and that acumen has included a number of corporate bankruptcies through the years.

It's far from the only time Trump has been mentioned on The Simpsons, but there's never been such a spot-on reference to his political ambitions — he was the star of a recent digital short, titled "Trumptastic Voyage," but that was after he'd already announced his presidential run.

Conversely, the 2000 reference speaks to the extent of his decades-long flirtations with running — prior to actually jumping in this year, he made noise about doing so in 1988, 2000, 2004, 2008, and 2012. Obviously, not everything about the joke makes perfect sense — 2030 isn't even an election year, and even if it were, Trump would be 84 years old by then, generally considered a little long in the tooth for a president. But all the same, you have to hand it to the episode's writer, Dan Greaney — as Trump himself might say, he crushed it.

More like this
'Waterloo Road' Is Back, With More Than A Few Familiar Faces
By Sam Ramsden and Vivian Iroanya
Matt Hancock Broke a Major Rule With I’m A Celeb
By El Hunt
What To Know About Martin Bashir After Watching 'The Crown'
By Bustle UK
How Is The British Royal Family Related To The Romanovs?
By Karen Fratti
Get Even More From Bustle — Sign Up For The Newsletter