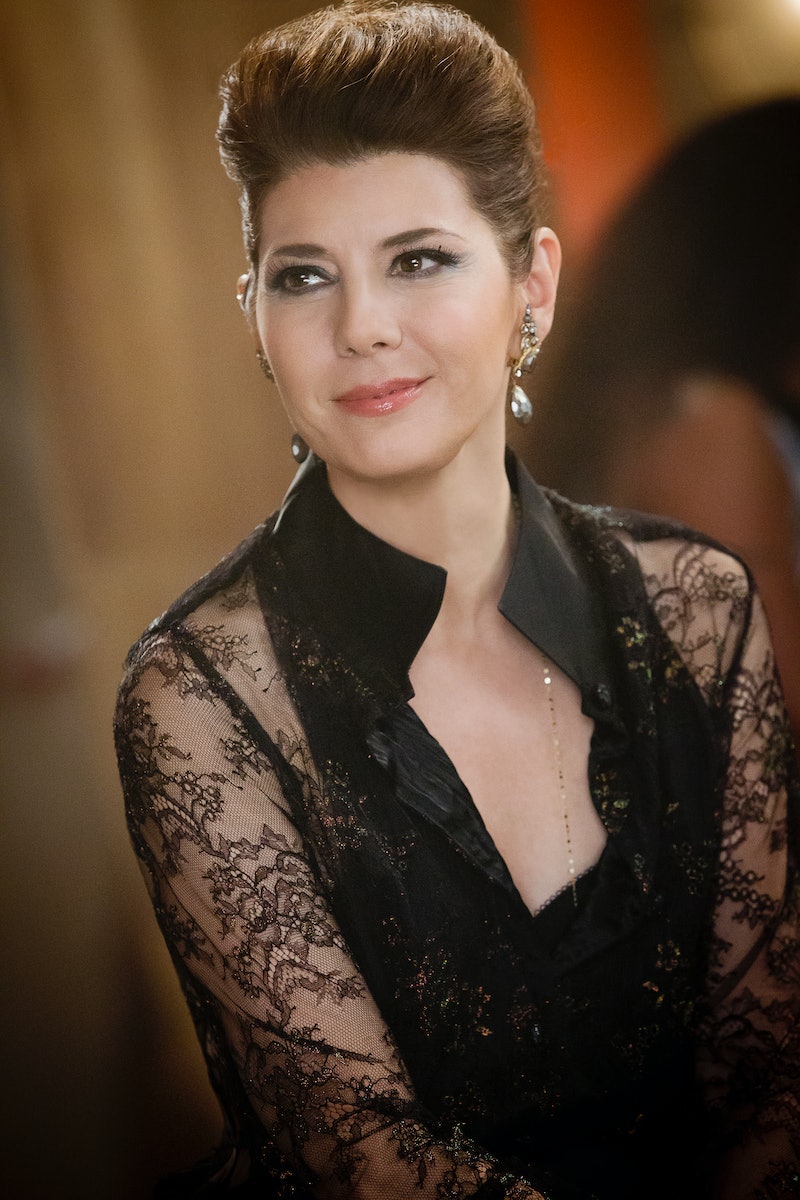 The main thrust of the Empire story in Season 1 was that one of the Lyon brothers had to be selected as the new caretaker of the family label. That responsibility ended up in the hands of Jamal, and it's already hardened his sensitive soul and isolated him from the music that's fueled him. But now Jamal has a partner and the Lyons have an outsider who has a say in how their empire operates. Marisa Tomei's Empire character Mimi Whiteman has invested millions in the company. But what does she want with it?

Mimi made her noisy debut in the Season 2 premiere, flirting with Cookie, shaking it with Anika, and being wooed by the ex-Mrs. Lyon's hostile takeover team. Lucious is suspicious of Mimi from the moment he sees her chatting up his former wife and wearing, may I say, a fabulous printed suit. He wastes no time in turning the proceedings around and aligning himself with her. Andre, Hakeem, and Cookie's business coup fails when Mimi changes sides and finds herself right next to me — on Team Jamal, that is.

Viewers know very little about who Mimi is at this point. Her defining characteristic is that she is obscenely rich. She doesn't have a music business background, and that's so far from the point anyway. An important development note that sheds light on this character: before Mimi was cast and fully written, the placeholder name for the character in the Empire writers room was Rich Whiteman. Showrunner Ilene Chaiken paraphrased that brainstorm session for TVLine: “There’s going to be a rich white man. Let’s call him Rich Whiteman for the purposes of this conversation.” And there's no way a character with that history could be of any benefit to the Empire, cash aside. Chaiken continued:

This got us onto the idea of the dangers that people like Lucious Lyon open themselves up to when they take their companies public — especially when the company is an artistic endeavor so intrinsic to their person. You expose yourself to being appropriated, to having your art taken away from you or having it changed. And that’s the story we’re telling.

Chaiken also described the moment that someone pitched Whiteman as a lesbian as a turning point for that character. It gave the writers a chance to play with "all those male conventions" inherent in a big-time business deal, including wining, dining, and sexual set-ups. Mimi also has the sorry honor of representing the bored and rich, who jump into companies that have been built from the ground up once as they're successful, and then use them as toys. Before the season began, Chaiken told TVLine, "[Mimi's] one of those very, very rich people who thinks that it would be really fun to own a movie company or to own a music company."

So, what are Mimi's plans for Empire? The scary thing is, I don't believe she has any. Mimi believes that running the company with Jamal will be a piece of cake, because art is something light and fun, and hey, she listens to music. Doesn't that make her an expert? The label is going to suffer for catering to this woman's whims, and Chaiken's description hints that the integrity of Empire's work will be questioned because of it.

Chaiken told TVLine that Mimi's story wraps up in Empire's mid-season finale, so I fully expect that Cookie will have orchestrated her downfall by then.

Forgot what happened last season on Empire? Check out the Season 1 drunk recap video below.