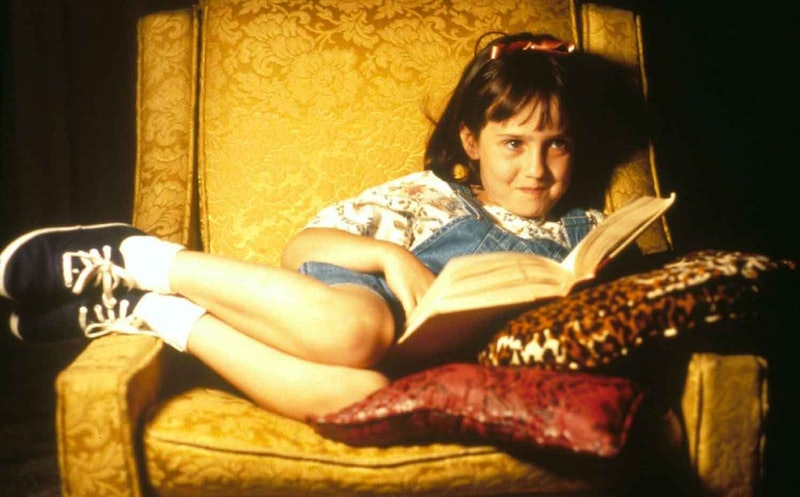 If you were to ask me what my favorite stories were from my childhood, I think I'd have to say Harry Potter and Matilda . Or anything by Roald Dahl, really, but Matilda is way up there. And you're probably in the same boat, which is why I'm betting you're gonna be super excited when I tell you that they're about to cross over. Yup. Hold onto your Muggle butts. I could totally see their worlds colliding, and you know who agrees with me? Mara Wilson, who played Matilda in the movie of the same name from 1996. She saw someone post a joke that Matilda is Hermione Granger if she was raised by the Dursleys, and was so delighted that she posted about it on Twitter.

When you think about it, Matilda existing in the world of Harry Potter actually makes a lot of sense, considering that, just like Harry, she also discovered she could do magic while in a terrible living situation. Hogwarts would have been just the place for her to hone her latent skills. Plus, there are all the similarities between the authors themselves. Both J.K. Rowling and Roald Dahl write (or in Dahl's case, wrote) fantastical children's stories with enough darkness and depth to them that they can also be enjoyed by adults. They both have an immense amount of faith in their young protagonists, endowing them with foresight and maturity often missing in their grown-up guardians.

All this is enough to bring a smile to my face, but also to get my brain working — what would it have been like if Matilda wasn't just Hermione in an alternate world, but an actual character in the Harry Potter saga? What if she was Harry Potter himself?

1. Matilda Wormwood And The Sorcerer's Stone

Matilda gets sorted into Gryffindor, as soon as the Sorting Hat checks in to make sure that she wouldn't prefer Ravenclaw, and immediately becomes best friends with Hermione Granger, because game recognizes game. Miles ahead in their schoolbooks, the two of them trade off in class slightly messing up the clothing of the teacher without getting caught. So of course, they notice right away that Professor Quirrell has a Voldemort face on the back of his head, and put together that there's something in the school that he wants.

One day in the middle of the night, they put Fluffy to sleep. Then, they go save the day themselves and snatch the Sorcerer's Stone out from under Voldemort's nose quietly and without fanfare. Who run the world? GIRLS.

2. Matilda Wormwood And The Chamber Of Secrets

Since Matilda isn't Harry Potter, Ginny Weasley feels much more comfortable confiding in her, and tells her right away about this diary she's found. From her own history of using writing magic (#TBT to that magical chalkboard that told Miss Trunchbull to cool it), Matilda recognizes Voldemort's hand in Tom Riddle's diary and gets Ginny to throw it out before it causes her to do anything insane. And, with all those hours freed up from blackouts and chicken murder, Ginny has plenty of time to join Matilda and Hermione's study group, where they finish their homework quickly, and then all bounce ideas off of each other about what's freezing the Hogwarts students.

It takes about an hour and a half for them to figure out it's a basilisk in the pipes, and, one day when all their work is done, the three ladies sneak down to the Chamber of Secrets and annihilate the monster quietly and without fanfare. Afterward, in regards to the chamber itself, Matilda says, "Honestly, IMO the Chokey is way worse."

3. Matilda Wormwood And The Prisoner Of Azkaban

Matilda is no joke when it comes to her personal safety, so I don't think she lets that big black dog mess with her head. I see her marching right up to it and being like "Hi, what's your deal? I'm Matilda." He arfs out that he's Sirius Black, Matilda puts the rest together with Hermione's help, and, when Dumbledore comes to them and says that they need to use the Time Turner to find a way to save both Sirius and Buckbeak, they're like, "We literally just got back from doing that, and are still ready for finals next week, so what up?"

Also, they just let Crookshanks eat Scabbers the next time he tries. Quietly and without fanfare.

4. Matilda Wormwood And The Goblet Of Fire

Matilda puts Miss Trunchbull's name in the Goblet of Fire, which at first seems like a real mean move for the rest of the kids, but actually completely saves the day, because Miss Trunchbull beasts through the maze, touches the Portkey first, and then rips Voldemort limb from limb when he won't declare her the winner of the Triwizard Cup. Meanwhile, Matilda and her girl gang let Miss Trunchbull take all the credit and slink back into the background quietly and without fanfare. They're really more excited about classes next semester given that they still have access to a Time Turner and can take as many credits as they want.

5. Matilda Wormwood And The Order Of The Phoenix

Since there's no more Voldemort, the Order of the Phoenix is just one long, elaborate game night. Everybody can bring a different dish every week, and Matilda is known for her killer bowls of Cheerios. She brings Miss Honey to one of these nights to introduce her to everybody, and Miss Honey makes such a good impression that, even though she doesn't do magic, she gets invited to start a kindergarten program at Hogwarts. When you're that good with kids, knowing how to turn yourself into a bespectacled cat is kind of secondary. (Sorry Professor McGonagall.)

6. Matilda Wormwood And The Half-Blood Prince

Without the specter of violence hanging over everyone's head, Professor Snape can stop pretending to be a Death Eater, and since, unlike Harry Potter and Lily Evans, Snape never had an unrequited love thing going with Matilda's mom, Snape has no problem with her. Thus, when Matilda introduces Professor Snape to her mentor Miss Honey at the start of the kindergarten program, they hit it off right away.

Later on, when Snape is over for one of his many dinners and sees what textbook Matilda has been using for Potions, he's like, "Oh that used to be mine, you should throw that out. There are some very dangerous spells in there LOL." Crisis averted.

7. Matilda Wormwood And The Deathly Hallows

Again, I can't stress this enough — there is no more Voldemort, so there's no need to search for and destroy his Horcruxes, although Matilda and Hermione co-author a meticulously-researched thesis paper on each of their locations and how to destroy them, should he ever rise again. Also, in the epilogue, we find out that Matilda and Neville Longbottom got together, because Matilda used her magic to look ahead in the future and see what the rest of us could not: how effing hot he'd turn out.

They had their wedding at Snape and Miss Honey's house, and both changed their name to Longwood because they're feminists. (They also considered Wormbottom, but ultimately decided that growing up with a name like that wouldn't be fair to their future daughter, whom they would name Bumblebee, after Miss Honey's father's nickname for her.)

Matilda Wormwood did in four books what Harry Potter did in seven. What's good, Harry?