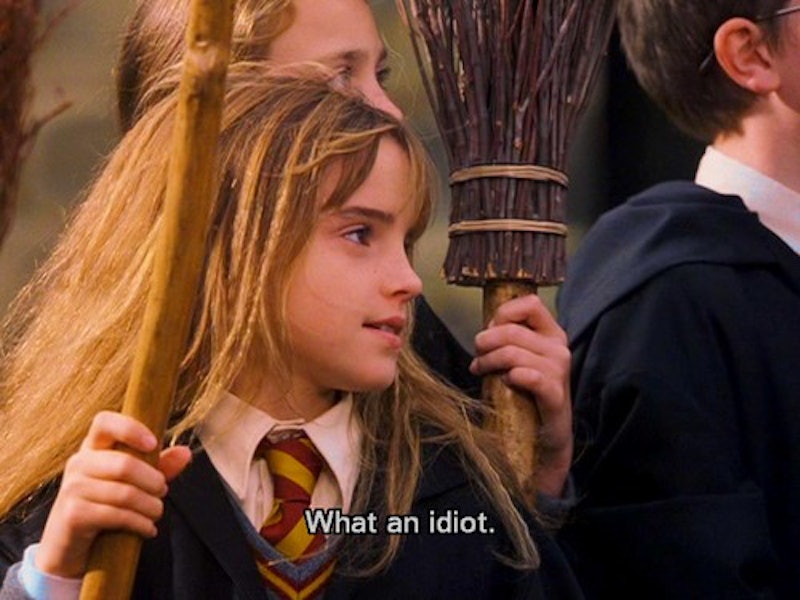 Harry Potter fans have entertained a lot of hypotheticals over the years — including whether Hermione should have ended up with Harry, whether the wrong Weasley twin died, and whether it's possible to create butterbeer for real — but here's a new one that actress Mara Wilson tweeted about: what if Hermione had grown up with the Dursleys instead of Harry? On Twitter, Hogwarts Logic points out that a version of Hermione raised by Harry's odious relatives would basically be Matilda, the telekinetic heroine of Roald Dahl's classic tale of revenge. It sounds crazy, but the more you think about it, the more the comparison makes sense.

First of all, the two girls are both brilliant, kind, and tough. Matilda's neglectful parents may not be quite as nasty as Harry's cruel aunt and uncle, but her child-throwing, inheritance-stealing principal Miss Trunchbull certainly is. Sure, Matilda is a bit more of a troublemaker and Hermione is a lot more concerned with her grades, but if we look to the books, there's actually a surprising amount of evidence to support the idea that if Hermione had been raised by the Dursleys, she would have been tossing playing cards around with her mind long before the owl arrived from Hogwarts.

Untrained Wizards Can Cause A Lot Of Trouble

Remember the reptile house? Dudley Dursley sure does! Young wizards often have magical flare ups before they head to Hogwarts — and Hermione always was precocious.

Hermione Gets Over Her Enthusiasm For Rules Really Quickly

Hermione breaks her first rule midway through first year and by fifth year she was conspiring with Harry to create Dumbledore's Army behind the teachers' backs. Hermione believed in rules as long as they worked in her favor, as soon as they didn't she was happy to break them with just as much glee as Matilda.

I still remember reading the part where Hermione finally just socks Malfoy in the jaw — so satisfying.