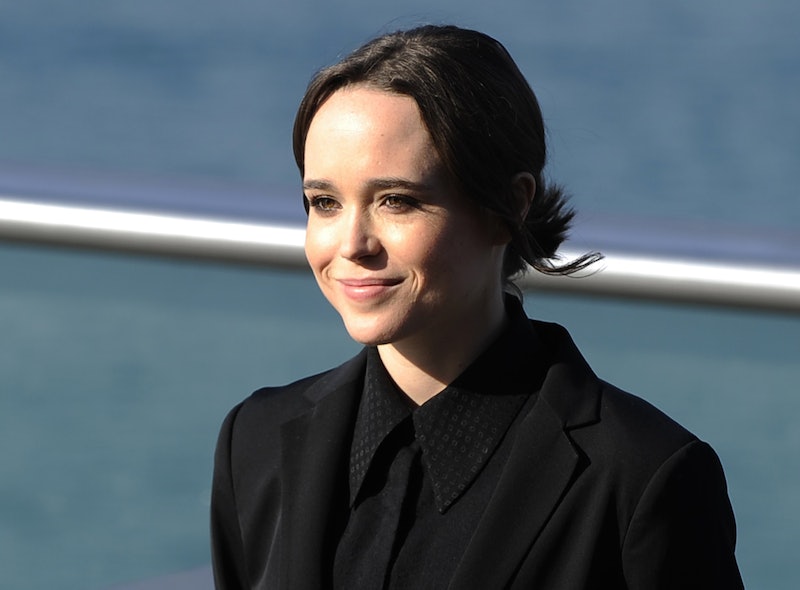 Ellen Page is opening up in more ways than one. Since coming out as gay, the actress has not only begun to openly embrace her new girlfriend Samantha Thomas, but also to embrace the fact that she is now able to do that. In a couple of new interviews this week, Ellen Page talked about flourishing after coming out, and it is really amazing to see how far she has come since doing so.

On The Late Show on Tuesday night, the 28-year-old choked up while talking to host Stephen Colbert about being in the closet and described the experience as "sad" and "toxic." The Inception star compared it to how her life is now, post publicly coming out a year and a half ago. "I feel so grateful for it," she said. "I feel so grateful to feel how I feel now, compared to [how I felt] when I was a closeted person. It's not a nice place to be."

Page, who made her official red carpet debut with Thomas on Sept. 13, also recently spoke with Entertainment Tonight about what a special experience it has been for her to openly love her significant other. She said,

It is obvious that to the actress, coming out was more than just getting secret off her chest. It was also about opening herself up to the possibility of true love. And opening that love up for the rest of the world to see and appreciate. And appreciate they have. Page is set to receive the National Vanguard Award from the Human Rights Campaign on Oct. 3 for her work in advocacy for LGBTQ issues.