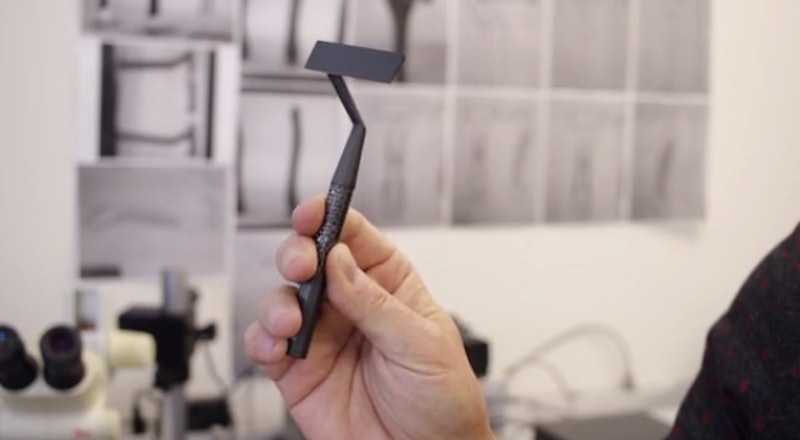 Shaving with a razor, be it your face, legs, or wherever, can suck. It leads to cuts, abrasions, and irritated skin. The process is so antiquated. A team of brainy, creative people, with cosmetic and dermatological laser industry backgrounds, hopes to revolutionize the shaving process with The Skarp razor, which replaces blades with lasers. The laser razor eliminates the headaches that accompany a traditional, handheld blade version.

The Skarp is easier, safer, softer, and greener! You can save face while you shave face. Thanks, I'll be here all week.

A Skarp razor Kickstarter campaign has launched and I'm intrigued. I shave my legs and my armpits in the shower and the lotions, potions, and creams that I use help to keep razored regions soft and smooth most of the time. But it's not 100 percent of the time. Also, most of my dude friends and boyfriends often complain about rough, post-shave skin.

It appears that The Skarp will obliterate issues like razor burn, ingrown hairs, infections, cuts, and bleeding. Since it's a laser, it won't exacerbate sensitive skin problems, as a blade often does.

But there's also an environmentally sound element to the Skarp, as well.

Here are the six reasons that The Skarp totally deserves to be fully funded and put into mass production. It's about damn time.

According to the promo video on the Kickstarter site, U.S. consumers toss two billion — with a "b" — used razors each year. They are not recyclable due to health risks. The Skarp will last much longer than a disposable razor, with 50,000 hours of use. Thus, it eliminates waste.

Previously, science and technology found a way for light wavelengths to cut through dark hair, but not through light or gray hair. The Skarp founders created a laser to cut through all hair.

The video details the science of the razor and it's cool, if you like nerdy stuff. But basically, in layman's terms, The Skarp can be used by anyone and in any area of the body. Boys, girls, face, bikini, whatever!

A typical razor blade cuts the hair shaft at angle, thus causing skin roughness. The Skarp makes direct contact and the laser melts the hair shaft, all the while level with surface of the skin. That means smoother and softer post-shave skin.

The Skarp is low power and eye safe. It does not emit UV rays and does not require any water or shaving cream, either. It's quick and won't add more time to your AM routine. It also requires a single AAA battery. So, so easy!

The Skarp is waterproof, so you can shave in the shower, too! There is no putrid, burnt hair smell, either, since the hair is not being burnt off.

Let's the 21s Century shaving begin. A dentist drills feel so un-modern. So does a razor blade. We can reach life on other planets with iPhones. There's no reason we can't shave with lasers, people!

Want more cool beauty tips? Check out the video below, and be sure to subscribe to Bustle’s YouTube page for more hacks and tricks!