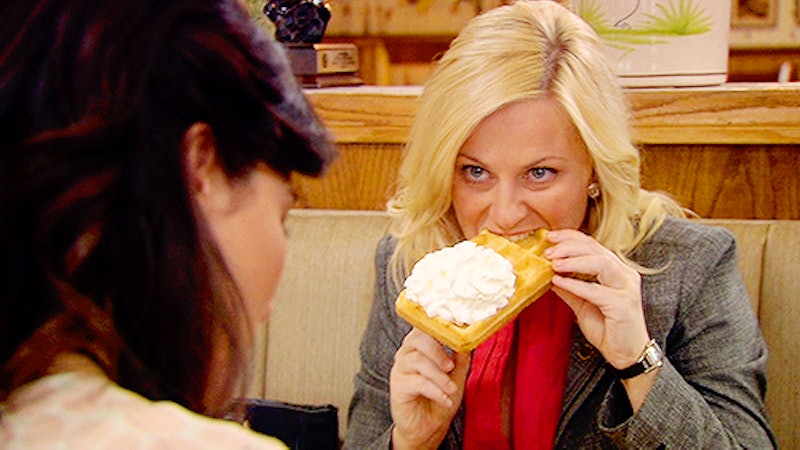 If you're anything like me, you probably love snacks. Who doesn't? Sure, mealtime foods like pizza and curry (my personal favorite) are delicious, but snacks just have a certain... je ne sais quoi. They're smaller portions — if you manage to limit yourself to one serving, that is — which makes you feel like you're being healthy, even if your chosen snack is a pack of Skittles or a bag of Doritos , and they tend to satisfy the more extreme cravings for saltiness or sweetness that meals just can't touch. Sure, snacking in excess is bad for you, but it sure does taste good. Nothing makes me crave snacks more than watching TV, particularly because a lot of the shows I watch tend to feature some really incredible-looking snacks. Unfortunately, most of those TV snacks aren't real, and that makes me sad.

Obviously, there are close real-life facsimiles of some of these foods, but it's just not the same. People on TV make their chosen snacks look so good, to the point where I often find myself wanting to reach through the screen just to steal a bite. At other times, it's not that TV snacks look all that delicious, but that they look intriguing, and that's enough for me. What can I say? I have an adventurous palate.

Here are 13 TV snacks I wish were real on a near daily basis.

In real life, you can buy Spongebob-branded "krabby patty" candies, which are basically stacked gummies and totally not as delicious as a real-life actual burger, which is what I imagine they are in the actual Spongebob universe. I love burgers, so I'd order a double.

Thankfully, donuts exist in real life. Unfortunately, I feel like the donuts Homer loves so much on The Simpsons have something special about them that make them so extremely addicting and delicious. What that is, we'll never know, and that's a sad fact we'll have to live the rest of our lives knowing.

Abed's special drink certainly did seem special. Sure, it really is just cold hot chocolate with an extra special dash of leftover cereal sugar, but doing that in real life just never seems appropriate. In Abed's world, it always is.

I don't know what in the world tubby custard actually is, and I almost think I don't want to know. However, I'll try anything once, and if this tastes basically like melted soft serve ice cream, I'm into it.

Liz Lemon is my snack spirit animal, and I think many of you will probably feel the same. She was a big fan of Cheesy Blasters, which is basically a hot dog stuffed with jack cheese and then rolled in a pizza. What's not to love? It's three delicious snacks in one!

When Rachel and Chandler started eating the cheesecake shipped to the downstairs neighbor, it became an obsession, to the point where they were eating it off the floor so as not to waste a single morsel. Sure, I can get New York cheesecake any day of the year, but will it be from Mama's Little Bakery? I think not.

If there's one thing Kel loves, it's orange soda. I've had orange soda in my day and it's pretty tasty, but I can stop drinking it. Why can't Kel? Probably because his orange soda is something not available in the real world, and that makes me very sad.

Another cartoon burger that I'd die to try. Honker Burger was THE hangout for the teens of Bluffington, and I don't blame them. I would probably go there every day, too. There goes my allowance money (no wonder he needed more!).

Given that Scooby Doo first came out in the '70s, it's probably safe to assume there was something rather unsavory (legally speaking) in Scooby Snax, but they certainly did the trick. I know craving dog treats is indicative of a larger problem, but maybe there's a human version, too?

Again, New York Pizza is pretty delicious, but it must be nothing like the Ninja Turtles were eating. Of course, I'd probably hold off on the guacamole and marshmallow topping and stick to a plain old cheese pizza, but I bet it's delicious.

Given that the Soup Nazi so often sent Elaine and Jerry away without the soup they were seeking, I guess I can't feel too left out. However, given that it was so in demand, it must have been incredible. Let me get a bowl of that!

Bob is always making up special menus with amazingly punny burger titles, and all of them always sound so good! I'd probably be wary if one of the Belcher kids were in the kitchen, but if Bob was at the grill, I'd sit in all day and try every last one on the menu.

Leslie is another of my snack soul sisters, and her love of waffles certainly resonated with me. Sometimes I feel like more of a pancake girl, but if they were as good as the ones available in Pawnee, I'd switch over right away.