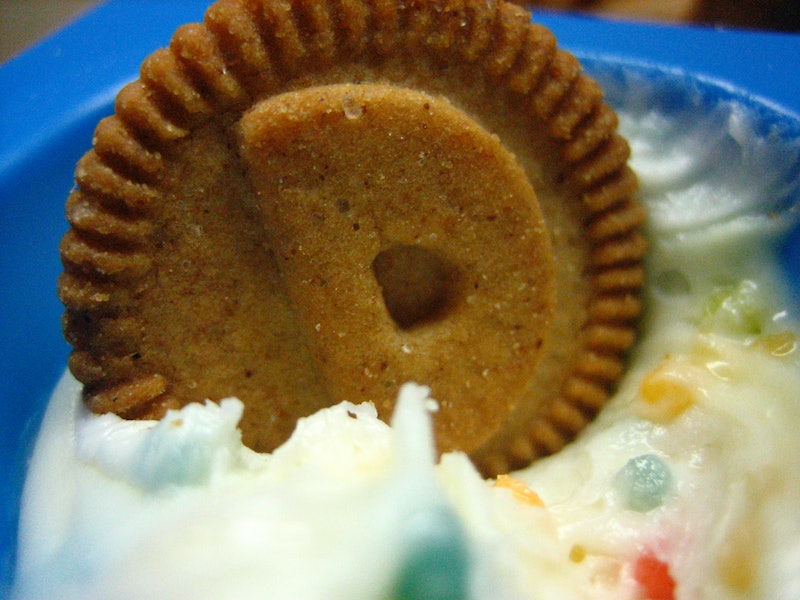 Kids these days have no idea what they’ve been missing out on. I’m looking at you, Generation Z — a group that missed Are You Afraid of the Dark? on Nickelodeon, Space Jam in theaters, and pulling out packages of Dunkaroos from their Beauty and the Beast lunch boxes. Dunkaroos were arguably one of the best snack foods from the '90s, but now that I have my own adult lunchbox (a plain, boring Tupperware container) to fill, I can't help but get nostalgic for some of my other favorite throwback treats. I miss my youth.

Ah, the '90s. In those days, parents didn’t mind sending their kids off with a Zebra Cake or calling a ham and cheddar Lunchable with a Capri Sun "lunch." It was a child’s charcuterie and cheese plate, and oh man, it was freaking delicious. We were way ahead of our time.

Today, you are more likely to see hummus with carrot sticks, or Greek yogurt and sliced fruit as an after-school snack. And juice? Only if it’s 100 percent fruit juice. Water preferred.

Which is just as well as eating a balanced and healthy diet is always a good thing. But Dunkaroos? Those sweet cookies, made even sweeter with a layer of vanilla or chocolate frosting with sprinkles on top? There might never be another treat like them. Here are all the foods from my childhood that I, like all '90s kids, desperately miss as an adult.

What kid could resist their favorite nacho cheese–flavored chips in a puffed-up, hollowed form? Apparently, few. Earlier this year, Frito-Lay debuted Jacked 3D Doritos, because who has time for one-dimensional snacks?

I’ll admit to eating animal crackers as a snack way after hitting puberty. These crackers bring me back to the days when I used the red box with the string attached as a purse to tote my LEGOS around. (I know that wasn't just me.)

Before our parents knew about the health benefits of Greek yogurt, we had yogurt with sprinkles. And that was just fine with us.

Children aren’t cheese snobs, which is why dipping flavorless pretzels into neon orange cheese was so fun.

Sure, this sweet treat is still around in stores, but it hit its peak in the '90s, and the snack was found in Aladdin lunchboxes everywhere. Who could resist the juicy center?

SqueezIts were fun to drink because of their flexible and see-through containers. It’s how kids managed their frustration when Clarissa Explains It All and So Weird got canceled.

No longer sold in the United States, Dunkaroos still have a strong following of adult fans who remember the fun-shaped cookies that could be dipped in frosting with sprinkles. Although you can order them through Amazon, you might need to resort to just learning how to make your own homemade Dunakroos.

Allowing 10-year-olds to build their own personal pizzas was perhaps the smartest idea since Dunkaroos. Attempting to make cool designs out of the squeezable marinara packets might have been the best part.

You knew you were doing something right at home, like cleaning your room or brushing your teeth without being asked, if you found Little Debbie Zebra Cakes in your lunchbox. The yellow cake with sweet cream filling was worth not back-talking your mom for at least a week.

Was it orange juice or punch? Or a cross between the two? No one really cared what was in the tangy, citrus-flavored drink — we only cared if it was delicious. And it was.

When the only dairy we consumed was Sprinkl'ins and chocolate milk, our parents turned to Polly-O string cheese. Little did they know that we peeled them not to eat, but to make mustaches or pretend they were worms.

Before we knew about Shark Week, we had Shark Bites, little fruit-flavored gummies shaped like sharks. Bet you couldn't eat just one pack.

Were there tears when we didn't find these caramel-coated green apple lollipops in our trick-or-treat bags? You bet there were.

The best thing about Bagel Bites was that you could eat them for breakfast (bacon, egg, and cheese) or for lunch. Of course, the best way to eat them was after soccer practice.