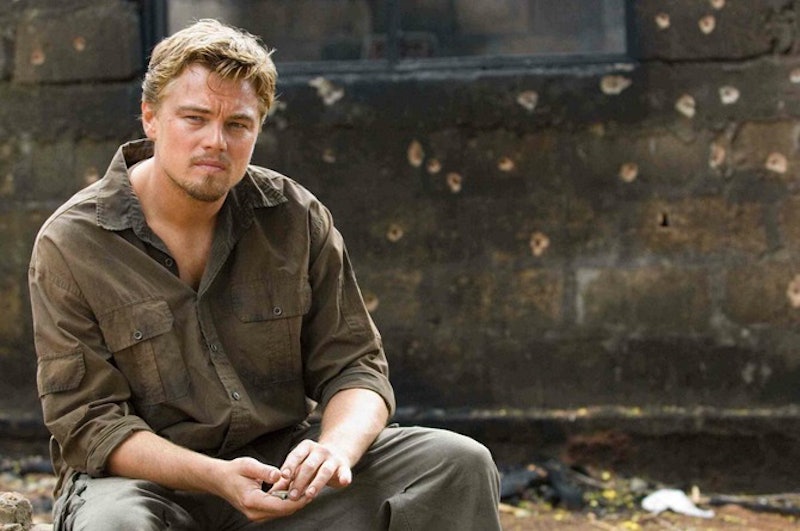 We brace for 2016 with a good many “This could be the year!” hopes and wishes. This could be the year that we elect a female president, that we discover life on another planet, that we build a Second Avenue subway line, and, most importantly, that we finally give Leonardo DiCaprio an Oscar. We, the merciful public, have been championing due recognition for Leo for the past 20 years. We’ve derided his losses of three Best Actor Oscars and one Best Supporting Actor Oscar, and, what’s more, lamented countless nomination snubs. But no matter how much sour fortune meets poor Leo, we cannot help but feel optimistic about his awards chances with every new film he sets forth. Like The Revenant , for instance. This could be the one. This could be the year.

In fact, maybe his Revenant role as 1820s frontiersman Hugh Glass is the one for which Leo was meant to win big all along, proving to be such since it pretty much makes all of his past performances seem mediocre by comparison. Denial-soaked narratives notwithstanding, it is worth looking back on old Leo roles that we were so sure merited the Oscar and asking ourselves today where we honestly stand on the matter. Yes, we’d like to see our beloved Leo take home a trophy, but has he ever really been the deserving party?

The role that elevated Leo beyond the pretty face plateau. As such, the world looked up the 19-year-old DiCaprio as an actor at the dawn of his career, poised for many nominations and awards yet to come. (We were half right.) On the other hand, we had four-time nominee Tommy Lee Jones contending for The Fugitive, and winning the edge thanks possibly to that same “This could be the year!” mentality that we find ourselves affording to Leo today. But the stronger, more transformative, and more empathetic performance was indeed Leo’s.

For better or worse, you can’t have a conversation about Leo without bringing up Titanic. But the grandeur of the star’s first blockbuster performance was not a feat of what we’d necessarily call awards-caliber acting, but of meticulous admission into James Cameron’s cinematic masterpiece.

Frank Abagnale Jr. in Catch Me If You Can

For my money, Catch Me If You Can is Leo’s best movie to date, though not necessarily his showiest performance. Leo yielded no acting nomination for the Steven Spielberg picture in the wake of a fairly strong Best Actor tide: Adrian Brody, the same age as Leo, took the trophy for The Pianist, and justly so. Veterans Jack Nicholson, Michael Caine, Nicolas Cage, and Daniel Day-Lewis (Leo's costar in Gangs of New York that year) lined the rest of the category.

Howard Hughes in The Aviator

You're bound to meet contention arguing that Leo better deserved the Best Actor Oscar for The Aviator than winner Jamie Foxx did for his turn in the Ray Charles biopic Ray. While Foxx's performance is no doubt one of vigor, it'd be unfair to discount the Academy's fetishism of career transformation stories. Comic actor Foxx veering dramatic in the mid 2000s helped push him far enough to best his dramatically inclined competitor.

Danny Archer in Blood Diamond (and Billy Costigan in The Departed)

2006 is when the mythos of the Oscar's eternal evasion of Leonardo DiCapario's grasp entered the pop lexicon in earnest. Leo was nominated for Best Actor for Blood Diamond and not for The Departed, a fact with which many fans took issue and blamed for his eventual going home empty-handed. In truth, neither performance deserved the award over winner Forest Whitaker (The Last King of Scotland); still, the nomination foulup highlighted Leo's ever increasing bad luck with the Academy.

The public lobbied with great energy for a nomination for Leo's supporting part in Django Unchained, excited over the mere prospect of the dramatic actor getting unprecedentedly kooky. However disappointed the world was when Leo didn't even land a nod, it's hard to argue that the snub wasn't justified. Leo's performance in Django was no match for nominated performances like Philip Seymour Hoffman in The Master or (once again) Tommy Lee Jones in Lincoln. DiCaprio's Django costar Christoph Waltz ultimately took the win.

Jordan Belfort in The Wolf of Wall Street

In addition to providing his most recent acting nomination, The Wolf of Wall Street granted Leo his first Best Picture nod as a producer. He lost out to Matthew McConaughey in Dallas Buyers Club and 12 Years a Slave, respectively; while the latter yielded little controversy, the former is at least up for debate. McConaughey's turn in Dallas Buyers Club was impressive enough to help relaunch his career, but at no point in the dramatic picture did the Texan actor undertake a body-bending, face-contorting, Animaniacs-grade physical tour de force like Leo's lude-addled sequence in The Wolf of Wall Street. That scene alone deserved an Oscar for DiCaprio.

Maybe The Revenant will finally be the film that convinces the Academy that Leo's time has finally come.

More like this
Remember When Benedict Cumberbatch Announced His Engagement In A Newspaper Ad?
By Hugh McIntyre
Tom Cruise Gives His Honest Review Of Lady Gaga’s New Song For 'Top Gun: Maverick'
By Hugh McIntyre
Regina King Puts Her Career, Family, & Friends Before Romance
By Jake Viswanath
What Is Jeanie Buss' Net Worth? The Lakers President Is Uber Rich
By Hugh McIntyre
Get Even More From Bustle — Sign Up For The Newsletter