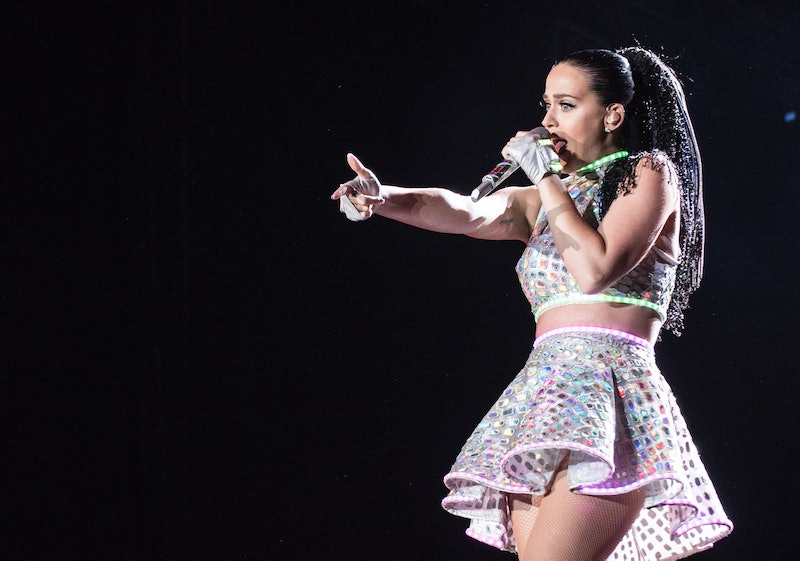 Listen, there are plenty of celebrities out there whom I'd be so thrilled to meet that I'd have to hold myself back from running up and throwing my arms around them, but let this video of Katy Perry being groped by a fan serve as a helpful reminder of exactly why we don't do that. This all went down at a Sep. 27 performance of Perry's, at the Rock in Rio Festival in Brazil, when she invited a fan up onstage from the audience. You can hear her say, "Come here, baby girl," and then the young woman stumbles onstage looking literally hypnotized by the chance to be this close to the pop star.

Perry puts her arms out to embrace the fan, and, after a moment of stunned stillness, she lunges forward, burying her face in Perry's neck for what looks like a normal hug. However, it turns out to also include some stealthy neck kisses that the camera is too far away to pick up. "She's kissing my neck!" says Perry into the microphone, which I would expecting would get the fan to stop... but the cringeworthy encounter was just getting started. Throughout the next three minutes or so, as Perry gamely attempts to hold the fan at arm's distance and continues quipping to the crowd about how she thinks she's "rolling," the young woman continues to touch Perry inappropriately. It's consistent, it's constant, and it's uncomfortable to watch.

Perry is able to keep her on task, and she barely even blinks, because I guess she's used to people wanting to touch her like this. However, we all know that doesn't make it okay, right? It was amazing that Perry was able to react so calmly, but she shouldn't have had to put on a brave face. The entire situation should never have happened at all, because there's a difference between loving a celebrity respectfully and what actually went down between Perry and this fan. I can't believe I even have to say this, but just because someone is a celebrity doesn't give you the right to grope them. We're all entitled to agency over our bodies, even if those bodies are famous. And, if it's not enough to learn it from me, learn it from that wide-eyed stare Perry's giving by the end of this.

Check out the super awkward moment below.