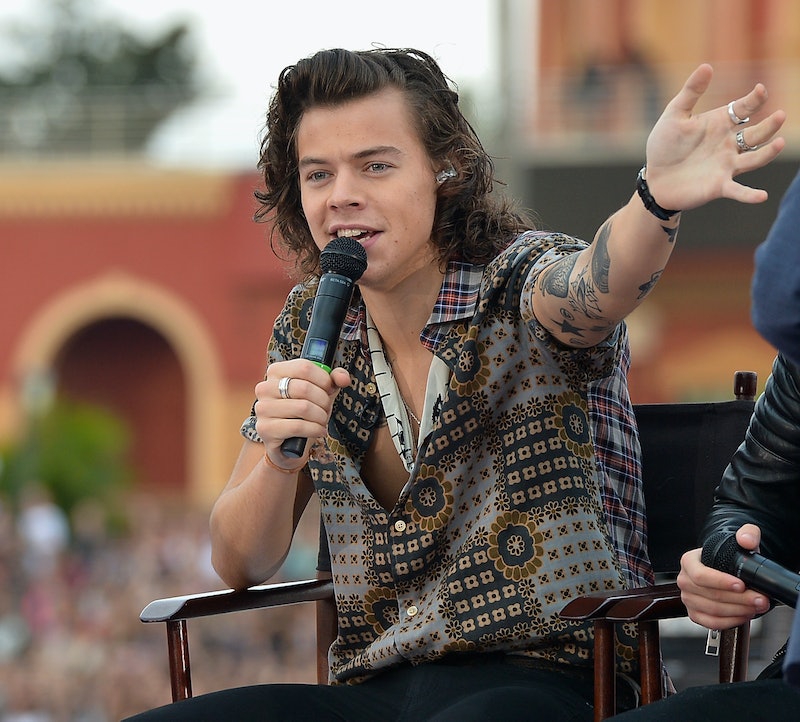 Say what you will about One Direction and boy bands, but Harry Styles has that certain je ne sais quoi. The guy is a star and his charisma can turn anyone into a fan. He is known for his joking around on stage with his bandmates, jubilantly eating bananas, and driving the girls mad. He does take his fashion and Instagram more seriously (you know those moody black and white photos), but when it comes to other social media, actual research now proves that Harry Styles is the happiest celebrity on Twitter!

I love that now if anyone questions that Styles is just the sweetest, nicest, and happiest dude around, you can literally say, "SCIENCE PROVES YOU WRONG!!!" I may or may not use that next time my friends question my fondness of a guy in a pop boy band.

So, how did this study come about? Semantics analytics firm Adoreboard created Toneapi, software that can sort words into 24 emotions and analyze them within their context.

Chris Johnston, chief executive of Adoreboard, had this to say of their findings: "Not only is Harry Styles one of the most popular celebs on Twitter with over 24 million followers but is also the most upbeat in terms of mood." Fun fact: Styles was likely found to be happiest because of the phrase "All the love," which he often uses to sign off his tweets. Consequentially, Chris Brown is noted as the least happy. Oh, hmm, what a shame.

Anyway, I choose to focus on happier times, so below are some happy Styles tweets prove he deserves his title and which will brighten up your day.

When He Wanted Everyone To Be Kind

When He Got Snacks

Shout out to that girl. You're a hero.

When He Cared About The Students

Education is important when you're not in the biggest band on the planet, and he knows this.

When He Only Wished Love

It's kind of his thing.

When He Got Good Advice

And he wanted to pass it on to everyone.

When He Appreciated The Small Things

What a romantic he is.

When He Had Great Taste In Films

Love, Actually is actually the best.

When He Had His First Movie Premiere

He was truly, truly grateful.

When He Was A Poet

I mean, seriously, who says these adorable things?

Sounds to me like Harry Styles' post-One Direction life could easily include a stint as a motivational speaker. I think he would sell those out pretty quick.