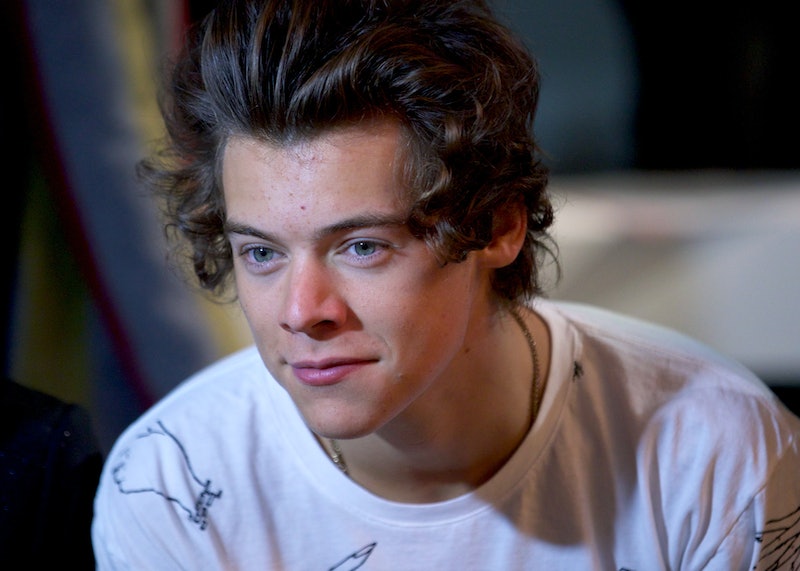 I've learned that in the realm of being a One Direction fan, there is no such thing as a silly question. I mean, you can literally be curious about anything and there will be people there to support you and guide you through the process of things like understanding Harry Styles' seemingly random tattoos and his habits of eating bananas on stage. Do not be ashamed, my fellow Directioners, because we all have somewhat embarrassing queries, and I am here to help you figure a certain one out. I follow Harry Styles on Instagram, along with 10 million other people, but it only just dawned on me how elusive his social media presence really is. For instance, why does Harry Styles' Instagram only consist of black and white photos? There must be a logical reason for this. Or is there...?

I suppose it comes as no surprise that a few fans have already come up with theories surrounding his mysterious Instagram posts. Styles was not a very frequent Insta-poster, but in late September 2014, he posted a photo of himself in Las Vegas, which ushered in the era of black and white. Fans immediately made an event out of this, commenting "R.I.P Colours" on his next photo, and marking this as a "moment."

Only in a 2015 boy band fandom is this considered an event, but since fans hold it very dear, I did some investigating to figure out what could have lead to this era of "emo Harry," if you will.

He's Responding To Taylor Swift's "Out Of The Woods"

Alright, I know they split up forever ago, but some fans have made some very interesting observations about the timing of his photos. One fan, Ava, noticed that Styles' posting of the black and white pics coincided with the release of Taylor Swift's "Out Of The Woods" in early October. A prominent lyric in the song is “The rest of the world was black and white, but we were in screaming color," which fans took as Styles sending a secret "message" to Swift about their relationship. Swift also posted a photo of her around that time with the caption "screaming in color." What does it mean!!1!1??!

Here is another far-fetched idea some fans have conjured up. On Oct. 30, Styles tweeted two words: "Traffic light." Sounds innocent enough, doesn't it? Not in a Directioner's world. This Tumblr user made a strong case for a theory that the actual colors of the objects in the black and white photos he is posting are in sequence of green, yellow, and red lights like a traffic light. I don't know, this does seem sort of convincing, but is there further significance to traffic lights? Of course there is! Read on...

This Is Part Of His Plan To Come Out

Apparently some believe that the traffic lights are alluding to Styles' intricate plan to come out as gay via social media. This theory holds that Louis and Harry are madly in love and cannot pursue their relationship, thus "no such green," as he quoted along with the image above. I will go out on a limb and say this traffic light thing could also be a reference to Taylor Swift. She once said to Wonderland magazine, "Relationships are like traffic lights. And I just have this theory that I can only exist in a relationship if it’s a green light." Dun, dun, dunnnnn.

I pretty much only wear black, white, and grey so I see the appeal. I will admit that by doing this he gives off a more mysterious tortured artist vibe and the ladies definitely love that...

He Wants To Be Seen As An Artist

Styles is young and in the biggest boy band in the world, but he is also a very introspective, charming, and intelligent guy. Instead of posting just silly photos, he has taken the route of an artiste, perhaps in an attempt to be taken more seriously. He has shared his love of art before, and at the advice of Jay Z (no big deal), invested in a $4 million painting by Jean-Michel Basquiat. Plus, he can show off a bit more of his photography skills.