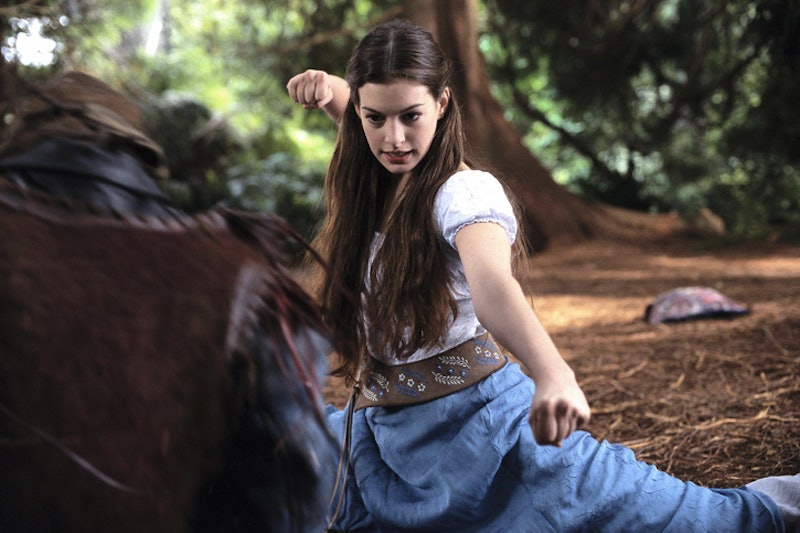 The world is chock full of Cinderella adaptations and movies where Anne Hathaway plays a spunky-yet-awkward princess, but there is only one Ella Enchanted. Well — OK, actually there are two. There is, of course, the charming novel by Gail Carson Levine that features a strong female protagonist with a knack for languages. And then there’s the film Ella Enchanted , which is a piece of cinema that features a girl who likes to break into karaoke standards from the 1970s.

Though the two pieces of art share a name, the two diverge as soon as you hear “Strange Magic” play over the town of Frell in the film version. Maybe that’s why I have a hard time digesting it. But, I’ll give you this: plot-wise, it is also about a girl named Ella cursed with being in obedient. She does encounter ogres and there is a Prince with the thinly-veiled Snow White reference of a name, “Charmont.” That much is canon.

It’s the everything-else part (and all the ways you can side-step problems with an obedience curse, TBH) that makes this movie baffling at points — and, yet, the everything else of it all is also what makes it worth revisiting.

And perhaps "celebrating" with a re-watch? Duh. Here are 24 chronologically documented moments of ridiculous from Ella Enchanted:

1. "Lucinda! She Gives The Worst Gifts!"

Girl, please! I have an aunt that gifted me a turquoise, leopard print sequined dress (shirt?) that came in a plastic bag from a Chinatown street vendor. I really doubt she has worst taste than that.

3. "Only Mandy And l Know About The Gift. We've Never Even Told Your Father. And You Must Never Tell Anyone Else. l Don't Want Anyone Using It Against You."

I can understand keeping an obedience curse on the DL is for the best, but I feel like making this an order (which she can't break) puts her in more harmful situations than not. I'm just saying that like 90 percent of the perils of her life could be avoided if she could maybe give her best friend — or, you know, her dad — a head's up. As it is, she has no chill when it comes to keeping it a secret in front of Hattie and Olive.

There are, like, three different parts to this thing.

First of all, Ella is that girl. Second of all, Ogrecide? There's a mass, systematic killing of Ogres? That's pretty dark for a children's film where most if not all of the audience have probably seen Shrek.

It just screams Middle Ages meets Limited Too, no?

8. Wait, Are Those Glass Sneakers In The Background?

Call me crazy, but I think those would be really hard to run in.

9. Why Is The Water Here Red? Is She In A Barrel Of Kool Aid?

Also, why is there a barrel of Kool Aid in the middle of the marketplace?

11. "l Forgot. The Elfin Restrictions Sir Edgar Passed. No Elf Shall Be Engaged In Any Occupation Other Than Singing, Juggling And/Or Tomfoolery."

Is this movie going to make me care about elf civil rights? If this was a Harry Potter book, maybe I'd take it seriously, but...

12. Portrait Of Our Brave Heroine, Mute And About To Be Eaten By Ogres

An inspiration to us all.

13. "Nobody Should Be Forced To Do Things They Don't Wanna Do. Take It From Somebody Who Knows."

No, but she actually sings some Queen.

16. OK, But These Are Seriously The Outfits That They Made Ella Move Her Clothes For?

17. Sir Edgar, A Mean SOB Who Is Big On Genocide And Obviously Pulled A Scar on His Brother, Makes Ella Do The Hokey-Pokey After Discovering Her Obedience.

Yeah, even she's a little perplexed by that one.

18. Oh, And Then He Tells Ella He Killed His Own Brother, Which Is Such A Villain-y Thing To Do.

Like, you've kept it under wraps this long, why not just commit to the secret?

Also, why is there a bare tree body in the middle of this beautiful field of flowers? What kind of agriculture does this kingdom have?

She says to the girl who's dry humping a tree in the effort to not kill her boyfriend.

"I mean, we literally met a week ago but you wear blue velvet suits so well..."

22. Then Ella Goes To Stab Him In His Heart, Which Is Apparently In His Back.

And then she just orders herself not to be obedient and everything's cool?

Neither Mandy nor her mother thought of doing this long ago? Are you kidding me?

23. This Giant And This Elf Are Now A Couple, So Enjoy Thinking About The Logistics Of Their Sex Life.

This giant also happens to be Heidi Klum.

24. And Then They All Go Singing "Don't Go Breaking My Heart" Because Why Not.

I might've skipped that chapter.