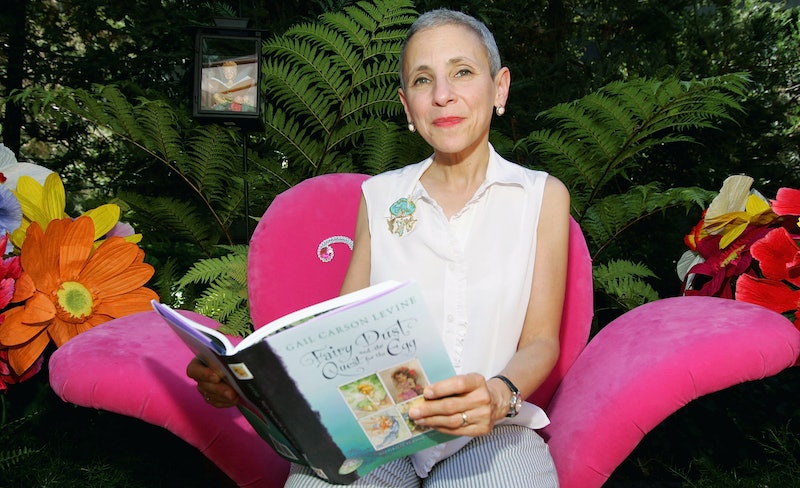 As the Disney-loving generation has grown up, the last few years have seen a massive influx of fairytale re-imaginings, enough to make an honest-to-goodness trend in the market. But author Gail Carson Levine was doing this nearly 15 years ago.

Levine's novel Ella Enchanted, published in 1997, retells the story of Cinderella. But that's not the only fairytale in Levine's portfolio. She also published several children's books and, most recently, Fairest, an adaptation of Snow White. (Not to be confused with Marissa Meyer's upcoming book of the same name about the evil queen)

Levine has been vocal about her love of fairytales and novels in that vein, saying that James M. Barrie's original Peter Pan was her favorite book growing up. But she's also been vocal about some of the issues she sees present in the stories. Talking about The Boy Who Cried Wolf, she said,

In the original tale, when the Boy cries wolf for the third time and there really is a wolf, the villagers abandon him by not coming to his aid.I’m mad at them for that. They deserve to lose their flock.After all, the Boy proves twice that he isn’t mature enough to be a shepherd. If he isn’t ready and they let him keep his job, they have an obligation to come no matter how many times he lies.I’m opposed to letting a child suffer a cruel fate, so to set things straight, I leaped into storytelling.

A similar thing could be said about Cinderella, she believed. So, in Levine's birthday week, let's take a look back at her most popular novel, the Newbury Award-winning Ella Enchanted.

Why did we love Ella Enchanted?

Like most people, when I was a kid, I was obsessed with Disney movies. I could sing every bar of every movie, and I would rank all my favorite characters. But the thing was, I always liked the villains best. I knew I was supposed to hate them, but they were the ones — particularly in the older movies — that got a little spunk and character. Maleficent was clearly the tops, but when watching Cinderella, I had a hard time getting behind the titular character and instead preferred to laugh at the stepsisters and cower at the terrifying Lady Tremaine.

Which was why Ella Enchanted was such a welcome breath of fresh air into my young woman, fairytale-loving life. Ella is certainly not ho-hum like her movie counterpart; she's an active participant in her exciting life. Instead of just dreaming it all up, she fights to make her life how she wants it.

Sorry, princess. That's not really how it works.

Ella is cursed with the gift of obedience — a significant departure from the original tale where she just sticks around cleaning and dreaming without ever standing up for herself. But this curse only makes Ella more determined, so she sets out to reverse the spell and claim her independence.

Instead of making me docile, Lucinda's curse made a rebel of me. Or perhaps I was that way naturally.

This journey, much to childhood delight, includes elves, ogres and lots of adventure. All of which were missing in the original tale. So basically, Ella was pretty cool in my young mind. And this Ella would not have taken kindly to her original namesake.

The reason we still love it is only a bit different now than then: Now, we mostly thank Levine, who created Ella for us young girls. With Ella Enchanted, Levine took a serious look into gender roles in traditional fairytales.

Let's face it, the whole Prince Charming situation in the movie is pretty messed up.

But in the book, Levine ensures that not only is Ella an active participant in the relationship, but it's based on equality, humor, and respect on both sides. In fact, it's Ella that (spoiler alert) ends up saving her prince, not the other way around.

And today, as a reader, it's clear to see how ahead of the times Levine was. Re-imagining fairytales to right their supposed wrongs is a huge trend not only in YA, but in adult fiction, movies, TV, and Internet culture.

Levine hit the wave more than a decade before, and she's still doing it successfully. That's something to be admired.

Marissa Meyer has taken her fairytale re-imaginings to a whole new world (Aladdin pun only somewhat intentional). In Cinder, our fairytale heroine is transformed into a cyborg mechanic who is struggling to build up enough money to leave her tumultuous home life. The series goes into major high-flying adventure territory with the addition of its sequels and new fairytale heroines Scarlet, Cress, and the upcoming Winter and Fairest.

Malinda Lo's Ash, like Cinder and Ella Enchanted, twists the original story of Cinderella. Instead of this love-at-first-sight, frankly, kind of silly romance in the original, Lo ensures that the romance here is strong and vibrant. The love she feels for a fairy huntress reinvigorates her and ignites a passion not only for love, but for living.

Ella in Margaret Peterson Haddix's Cinderella retelling is simply not going to go out without a fight. In this story, she's already engaged to "Prince Charming," and she's not happy about it. Not one for being ladylike, she makes certain that people know this.

More like this
A 'Bridgerton' Star Just Dropped A Major Hint About Joining The Live-Action Barbie Cast
By Bustle UK
The 20 Best Audiobooks To Fall Asleep To
By Aoife Hanna and K.W. Colyard
Laura Dern Said “Cultural Awareness” Made Her Rethink This 'Jurassic Park' Fact
By Grace Wehniainen
The 'Hocus Pocus' Sequel Finally Has A Release Date & It Makes Total Sense
By Shannon Barbour and Radhika Menon
Get Even More From Bustle — Sign Up For The Newsletter