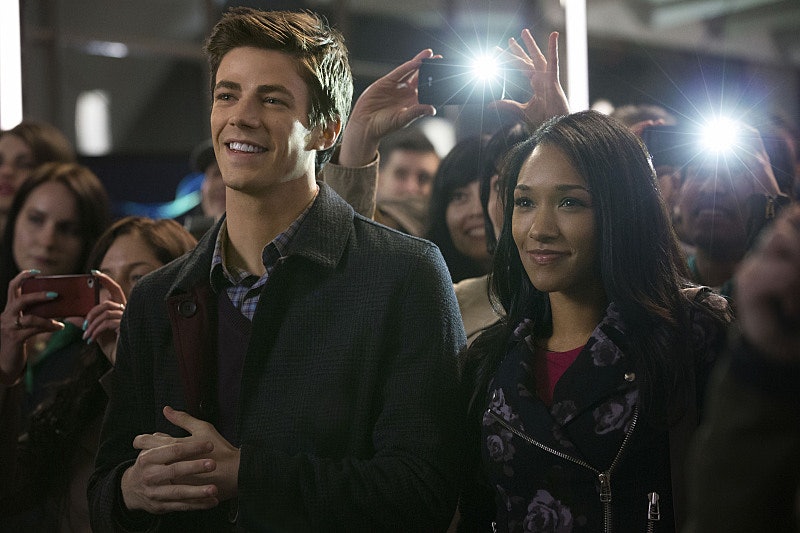 If you're restless waiting for more superhero action to get back in your life, I have good news. Season 1 of The Flash will hit Netflix on Oct. 6. That's awesome, but it gives you limited time to binge before the CW series returns that same day. Luckily, you can probably skip around and get a good idea of what's going on with just a few select episodes.

The Flash is about a man named Barry Allen whose father was wrongfully incarcerated for killing his mother. During an explosion at a nearby laboratory, Barry received the super ability to run faster than any living person (or so he thought). Barry wasn't the only one to receive "metahuman" powers, but apparently he's the only one who has any semblance of a moral compass. It's up to his newfound friends and team at S.T.A.R. Labs to restore order in this new world. However, Barry's new mentor, Harrison Wells, is made up of 40 percent sly shady smirks and 60 percent secret layers. Barry Allen might be saving a lot of people, but he's been in danger this whole time.

The best thing about The Flash is that it doesn't take itself too seriously. You aren't going to find any brooding, angsty superheroes or antiheroes here. It's realistic without being gritty. I highly encourage everyone to check out the whole series on Netflix. That said, here are my picks for the best episodes to watch if you want to refresh or catch up on The Flash quickly. Just one brief warning — if you're planning on watching these episodes for the first time, there will be some mild spoilers below.

I know this show is about time travel, but you gotta start from the beginning. The pilot sets up everyone at S.T.A.R. labs and many of the show's initial my

Not only did this episode mark the return of Felicity and Barry's almost-relationship, but we meet Leonard Snart and the "Rogues" for the first time. They are important to the series in that they are villains, but not metahumans.

While it doesn't connect too much to the show at large, it's fun to see the Flash and Arrow teams working together.

This episode is important to establish Cisco's relationship with Harrison Wells. Also, Andy Mientus' portrayal of Pied Piper is delightful.

Even if you're a staunch Barry/Iris shipper, the karaoke scene in this episode is one of the best.

In which we finally, finally learned the truth about Harrison Wells. This is also the first time that Barry runs so fast that he time travels.

The episode that follows is not only essential to understanding Barry's time travel, but a whole lot of fun. It's basically Groundhog Day.

Again, you can't miss the episodes in which Team Arrow comes to viist.

This is when they really start gearing towards the finale and the secrets come out about Eddie.

You're also definitely going to want to watch the Season 1 finale. That's it! You're caught up on who knows what, who's secretly who, and who's secretly related? The Flashisn't always a soap opera, but it has its moments. I'm sure we'll see all of that in more when The Flash returns for Season 2.