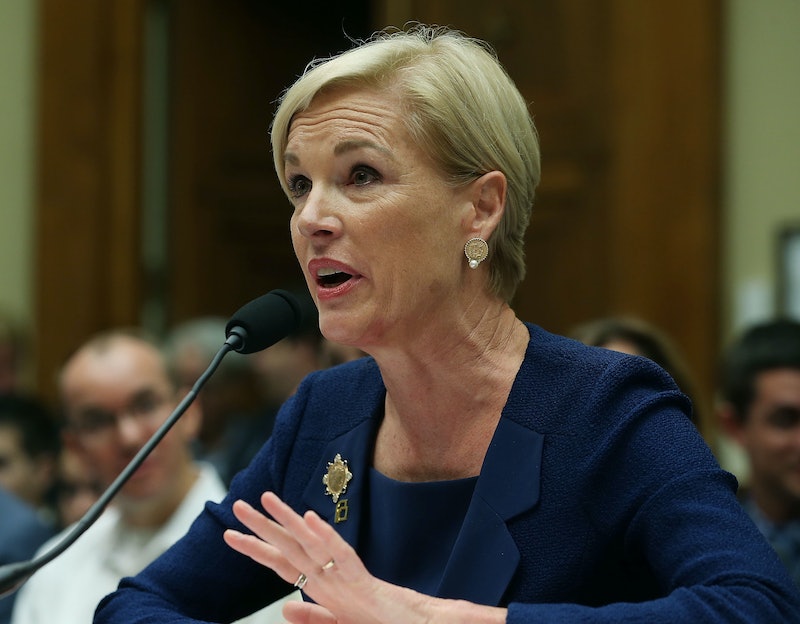 On Tuesday, Planned Parenthood President Cecile Richards defended the health organization's services in a hearing before the Republican-led House Oversight and Government Reform Committee. She told Congress that accusations that Planned Parenthood illegally profits from selling fetal tissue for research are "offensive and categorically untrue." Republicans in Congress have continuously attempted to strip the organization of the $450 million in federal funding it receives each year since doctored hidden-camera videos claimed to show Planned Parenthood staff members discussing profits from the sale of fetal tissue. They've almost shut down the government in the process. Thanks to videos of the hearing, you can watch Richards defending Planned Parenthood to Congress like only she could.

In her official testimony before the House committee, Richards emphasized how many American women rely on Planned Parenthood for reproductive healthcare, saying that one in five women has visited one of her clinics, and addressed incorrect information about what its funding is used for. She said:

There's been a great deal of misinformation circulated about Planned Parenthood recently, and I want to be absolutely clear at the outset. The federal funding that Planned Parenthood receives allows our doctors and clinicians at our health centers to provide birth control, cancer screenings, and testing and treatment for sexually transmitted infections.

In reference to the hidden-camera videos that sparked the conservative battle to defund Planned Parenthood, Richards:

The outrageous accusations leveled against Planned Parenthood based on heavily doctored videos are offensive and categorically untrue.

During her statement, Richards not only stood up for her organization, but also for women everywhere, advocating for a woman's ability and right to make decisions about her own body without politicians interfering.

At Planned Parenthood, we believe that women should be able to make their own decisions about their pregnancies and their futures, and the majority of Americans agree. We trust women to make these decisions in consultation with their families, their doctors, and their faith, and not by Congress.

One of the best moments of the hearing was when Richards called out the committee's chairman, Representative Jason Chaffetz of Utah, for using a misleading chart from the anti-abortion advocacy group Americans United for Life, which showed the number of abortions performed at Planned Parenthood clinics increasing over time as the number of cancer screening decreased. Richards was clearly confused by the chart, saying she'd never seen it before, and Chaffetz said: "It comes straight from your annual reports." Richards responded:

My lawyers just informed me that the source of this information is Americans United for Life, an anti-abortion group. I would check your source.