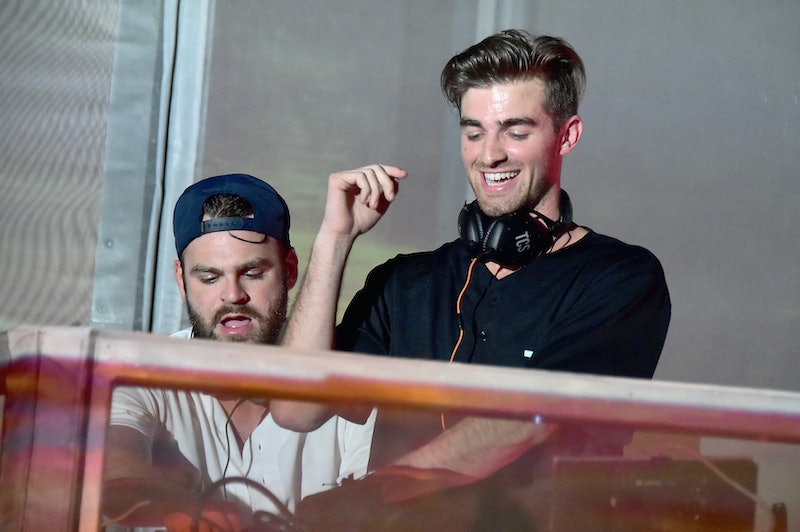 Remember in the summer of 2014 when everyone kept saying "But first, let me take a selfie?" Whether you knew it or not, the phrase came from a song called "#Selfie" by DJ duo The Chainsmokers. The song is about being at a club and a club is definitely the best place to listen to it — or, you know, on your couch while you try to take the perfect pic. The Chainsmokers, which consists of Alex Pall and Andrew Taggart, have moved on to a more toned-down sound since the song became a major hit over a year ago, but during their visit to the Bustle office, I couldn't help but ask them to participate in some selfie-themed fun. The Chainsmokers took selfies in six different styles to show off their emotional sides and their best Justin Bieber impressions.

But before we get to their, well, interesting photos, what is the duo up to these days musically? After all, it's been a while since "#Selfie" was everyone's obsession. For one, they released a new single called "Roses," which features vocals from up-and-coming singer Rozes, with whom they co-wrote the song. Taggart says of working with her, "The session we did with her, that song came together really quickly. In like one day, pretty much all the music production, all the lyrics." Pall adds about working with Rozes,

She's super cool. It was funny. Her brother manages her, but he was in another band, and they came up and we were all just hanging out and then he left and when he came back like three hours later, it was like essentially done. But she's really cool, and she's going to be doing more shows with us.

While Pall and Taggart want to release an album at some point, they don't have any plans to do it right away. "We'd love to do a more comprehensive body of work... but I don't know when the right time to do that is. We'd like to do one next year, but no solid plans," Taggart explains.

For now, it seems like they're definitely getting some new work out there and having a good time with it. They recently set off on a 37 show tour with stops in Asia and North America. And while they're super busy — Taggart believes they're the highest touring act in the world, performing 300 shows last year — they do have time to snap a couple pics. Check out The Chainsmokers take on different selfie styles below!

2. Just Got Broken Up With

This one they ended up interpreting as "Checking Out Kim Kardashian" rather than being Kim Kardashian, but it's a good effort none the less!

If you want to hear more from The Chainsmokers, "Roses" and other songs are available for download on iTunes and for streaming on their official website.