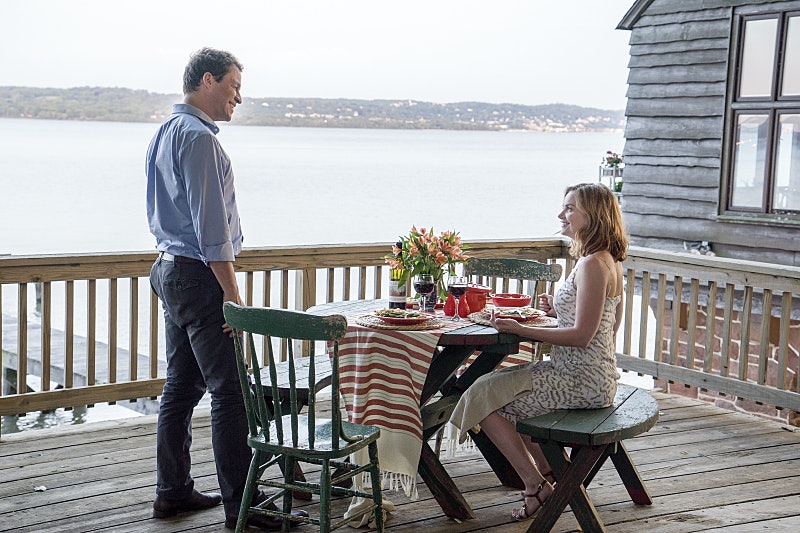 The last time we saw Noah Solloway, his temporary domestic bliss with Alison was seriously disrupted when detectives showed up to arrest him for the murder of Scotty Lockhart. And, as I tuned in for The Affair Season 2 premiere, I couldn't help but hope that we'd get some major clues or resolution about the mystery surrounding Scotty's death. As it turned out, we didn't — but the episode definitely didn't disappoint. It picked up well before Noah's arrest and, although the timeline remains unclear, the arrest still appears to be about a year away because Alison isn't shown to be pregnant yet, and the book that made Noah wealthy is still incomplete.

Creators have changed up the show's formula in a major way. Season 1 dedicated half of every episode to Noah's point of view, and the other half to Alison's. But this season, their jilted spouses POVs are being added — and based on the premiere, it's a great decision. When I initially read that Helen and Cole would have their perspectives thrown into the mix, I was admittedly skeptical because I was imagining that each episode would jump between four points of view — and that seemed like a bit much, even for The Affair. Instead, it looks like showrunners will continue to keep each episode to two POVs, and will alternate between who gets the spotlight.

In the premiere, the focus was on Noah and Helen as they began their hostile divorce proceedings. In fact, Alison only got a few minutes of screentime and Cole was absent altogether — so presumably next week we'll get the scoop on what's going on with that divorce. Season 1 was all about Noah and Alison's infatuation with one another and their reckless affair, so it made sense to focus solely on the pair — it mimicked their own obsession with themselves and each other. But Season 2 will be all about the repercussions, and adding Helen and Cole's perspectives is an ideal way to show the painful impact that was caused by Noah and Alison's affair.

As for Scotty Lockhart (RIP), there were two brief scenes after Noah's arrest — but they provided precious few clues. Detective Jeffries urged him to take a plea deal rather than go to trial. It turns out the judge is a local whose wife was killed in a hit and run — which seems like a serious conflict of interest, but I digress. Jeffries pointed out that Noah will walk if he takes a plea deal, but he could get 25 years in prison for vehicular homicide if a jury can be convinced that he had motive. Later, Helen showed up with a high-priced defense attorney and told Noah she's footing the bill.

So, did Noah actually kill Scotty? Although he certainly knows who's responsible for the death, it seems like he's covering for someone. Since his car hit Scotty, the two most obvious suspects are Whitney and Helen — which would explain why Helen is so willing to help prevent a "guilty" verdict. Noah certainly had a serious axe to grind with Scotty since he, you know, impregnated his teenage daughter — and he did physically attack him twice, but that could be attributed to his somewhat violent temper rather than an actual wish to kill Scotty. Season 1 showed that Helen was far angrier about the statutory rape than Noah — she was adamant about pressing charges, while Noah thought they should just let it go.

But I think Whitney is most likely the person who hit Scotty, and it was probably accidental. We know that she was making trips back to Montauk without her parents' knowledge, and that she still had feelings for Scotty. It seems plausible that during one of those trips, she followed him too closely in an effort to initiate contact and accidentally hit him, then fled the scene and asked Noah to help her cover it up.

The truth will probably emerge slowly as the season progresses, but based on the below trailer we can expect some serious trust issues to arise between Noah and Alison. So another mystery for Season 2 could be, is it possible for this relationship to truly last?