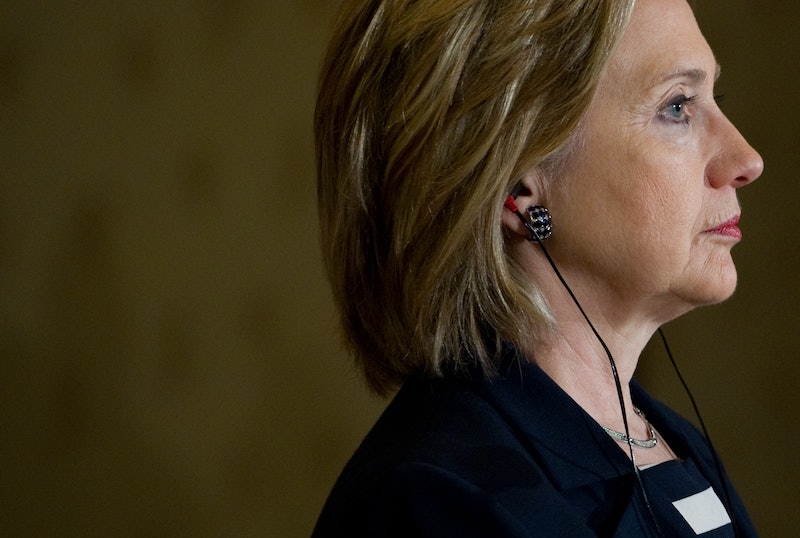 The latest batch of Clinton emails was sure full of scandal — and by scandal, I mean it was 6,000 pages of pure logistical banality. Still, there were some gems. Though this State Department dump had significantly more redacted material than last time, the funniest, most interesting emails were the mundane exchanges among Clinton and her aides. For instance, there's the time when she called Harriet Tubman "my home girl." There's Clinton naively wondering about the definition of "FUBAR." Then there's the email that would resonate with any This American Life fan or Serial fanatic, an email sent during the throes of suburban boredom, a dire yet unanswered request — at 3:45 p.m. on Aug. 20, 2010, Hillary Clinton was desperate for some NPR.

Reaching out to not one but three of her aides, Clinton asked, "Can you find out for what NPR stations I can hear on Long Island? I lost the WNYC signal half way down the island and can't figure out from Google what the next stations are." More than 24 hours go by, and no reply. "Did any of you get this?" she followed up the next day. Still no response. While we'll never know if the former Secretary of State got to indulge in some high-quality radio, this very sad email thread will keep us amused for a while.

While a substantial bulk of Clinton's latest released emails dealt with matters of the media, no other news outlet were highlighted in such favorable fashion. It must be noted that about a third of these emails were news wire items — either AP or Reuters. Makes a lot of sense considering her job is diplomacy. In one notable news highlight, Cheryl Mills, Clinton's counselor and chief of staff, pointed her to an article that referred to Tim Gunn's criticism of her not-so-feminine attires. Mills titled the email, "Tim Gunn, talking smack..."

Despite our collective enjoyment of peering into Clinton's professional life one email subject at a time, the troves of emails released by the government are part of a not-so-funny investigation into her use of a personal server during her time as secretary of state. While Clinton has maintained that she never exchanged messages that were classified at the time, some material are categorized as classified now, with three in the latest batch marked as "SECRET."

Still, among the most compelling emails were the most mysterious and heavily redacted ones. Nothing, however, has been quite as epic as the gefilte fish.