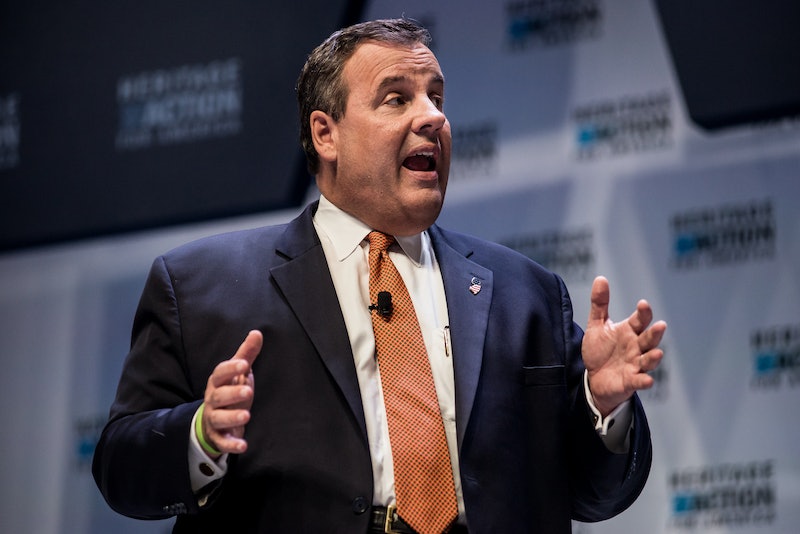 During his Wednesday night The Daily Show appearance, presidential hopeful Chris Christie explained his visa plan to Trevor Noah. It was the first question that Noah, the new Daily Show host lobbed at Christie, a Republican hopeful. And it's unsurprising that Noah was curious about Christie's immigration plan — considering that Noah is an immigrant himself. According to Noah, he had heard Christie discussing his biometrics plan. "I felt like you were talking to me personally," said Noah, who is a South African national.

"You want people to get FedEx stamps, or...?" Noah asked Christie, alluding to an earlier gaffe where Christie said he'd invite the founder of FedEx to overhaul Immigration and Customs Enforcement. "I was thinking of getting a stamp here, like a tramp stamp," Noah said, literally getting up and showing Christie his butt.

To his credit, Christie took it in stride, explaining that the stamps in question are fingerprints — not a way to treat people like packages. His visa plan would utilize biometric tracking to create a fingerprint database that would keep track of immigrants who have entered the country with visas. "A fingerprint is unique to every human being," Christie said. "We should be able to track people who come into the country on visas for a particular period of time."

Noah pushed the subject further, asking about Christie's past comments that fingerprints could be used past airport security, and could even be required to access certain services like car rentals. If anyone has overstayed their visa, it would be flagged in the system. And according to Christie, the U.S. would then "tap [those people] on the shoulder," and tell them that "it's time to go home."

"Are you going to be at all the car rental agencies?" Noah asked, laughing. "I'll be at the one where you are," Christie joked back. The two men may have been laughing, but there was tension. "This is personal," Noah told the 2016 hopeful, who cheerfully agreed.

According to Noah, the cost of establishing and maintaining a biometric system could cost as much as $7 billion, but according to Christie, it's a small price to pay: "It's a lot less expensive than a 2,000 mile wall across the entire southern border," he responded.

Though ambitious, Christie's plan is by no means the most forceful immigration plan put forth by the 2016 Republican candidates. But there is bound to be a bit of awkwardness that accompanies speaking to an immigrant about your plans to potentially kick them out of the country. Granted, Noah isn't the kind of immigrant that members of the GOP are talking about — he comes from South Africa, he's here (presumably) on a work visa, and is protected by wealth and status.

But his interview with Noah brings up an interesting possibility: Maybe before candidates can advertise their immigration reform plans, they should have to sit down and explain to immigrants. They are, after all, the individuals who will be impacted by these initiatives. It would be interesting to see if all the conversations go as civilly as Noah and Christie's.