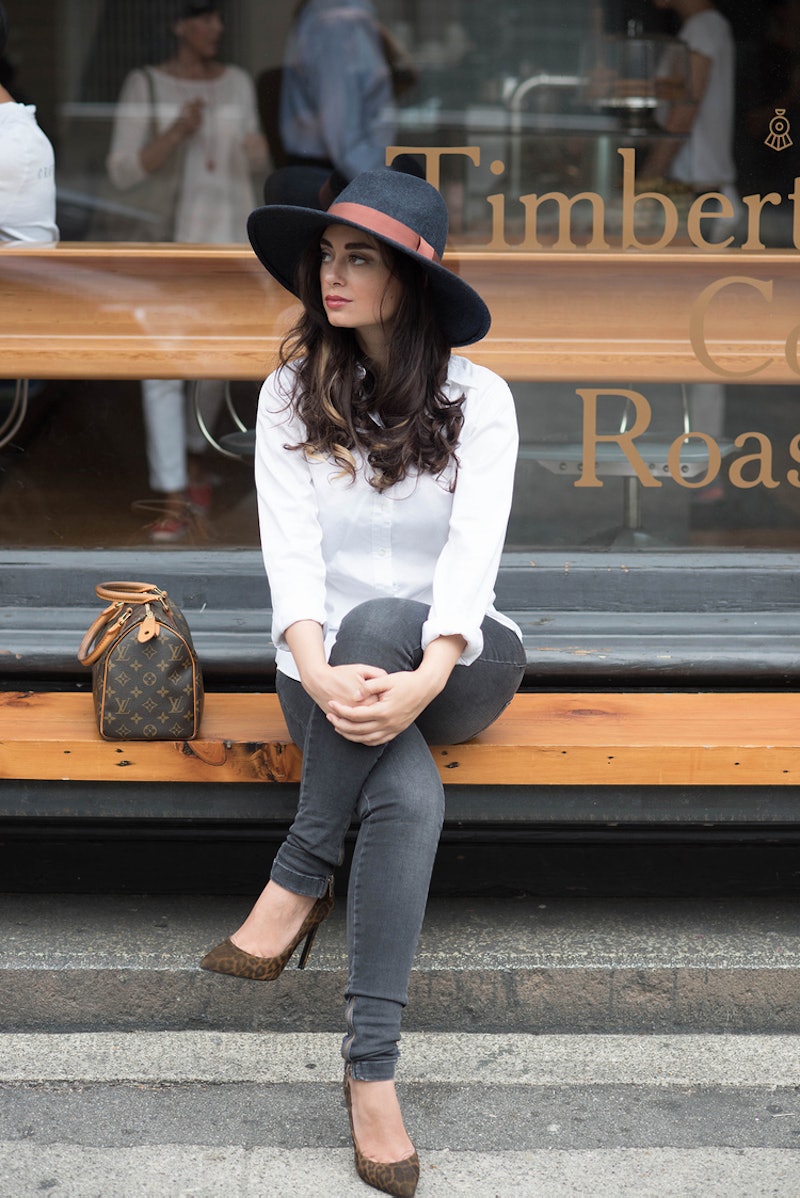 Whether you're a fashion blogger or camera phone clicker, there are certain lengths you probably go to when snapping the perfect photo that often end up in awkward photoshoot moments. At the time, such experiences can feel completely cringe-worthy, but once you have that shot, it all becomes worth it. Whether it's pausing in the middle of a busy city intersection to get that "crossing the street" sartorialist pic, posing in front of a pretty restaurant while diners look on with avid curiosity as they work on their appetizers, or forcing your friend to get accessory shots as a confused neighbor gapes on while over-watering his azaleas, the waves of awkwardness are always worth the final product.

At the time, however, you likely wish you had a different hobby. In an effort to roll off the self-consciousness and encourage you to keep doing what you love — no matter how weird others might think it is — I've spoken to seven fashion bloggers via email, who have shared their own trials and tribulations when trying to capture that perfect photo. Everything from dealing with curious tourists to getting hurt pop up along the way (giving a new meaning to suffering for your art, right?), but they all prove that when you truly enjoy something, the curious judgement of others doesn't really factor in. And how great is that?

1. When People Literally Point And Stare

When it comes to taking outfit photos in the open world, you can pretty much count on one awkward encounter or other. Kathryn from Fashionography can sympathize.

One of her most cringe-worthy moments came when taking some outfit photos with a roommate in front of their apartment. It was going well when, from the corner of her eye, she spotted her neighbor on his balcony... taking iPad photos of them and looking extremely confused as to why they were getting close-up shots of her shoes.

When asked how she recovered from that moment, Kathryn says, "Knowing people are watching a photoshoot is still not always super comfortable for me, but when those awkward moments happen, my mindset is that you just have to roll with it, and rock what you’re doing; in the end, people are (mostly…) staring because they’re interested or confused, not because you look weird, so stick with it!"

2. When You Do Awkward Moves For A Perfect Snap

Not everyone has the luxury of a friend or significant other who will take their outfit pictures. In cases like those, you often bust out a tripod and make it work... which evidently can lead to moments that land a little further up the awkward scale. It's something that Gentri from Gentri Lee knows firsthand.

Photographing an athletic outfit, she wanted some action shots and proceeded to fly into jumping poses in front of her camera. To give you some context, this was happening in front of her garage in her suburban home, which was a pretty safe spot when it comes to outfit backdrops. Or so she thought.

Gentri recalls, "Later, my neighbors were over visiting my family, when I walked into the room. They gave me a funny look and then said, 'What on earth were you doing outside this morning? We watched you jumping around for the longest time and we just laughed and laughed!' Um, thank you, for that."

Sometimes you have to act the fool to get the result you want. Just go for it, though. You might get teased, but just think of the satisfaction of getting exactly the picture you were after.

3. When You Gotta Scramble To Save Face

Sometimes things will be more painless if you break out of photographer mode and wait until the curious onlookers pass by before launching back into your mission. Linda from The Dragonfruit Diaries would attest to that.

One day she was taking photos under a bridge when she heard voices rounding the corner. "I've never moved so quickly in my life," she recalls. "I quickly jumped out of my blogger pose and dashed to the tripod. Pretending to fiddle with the dials, I had the camera pointed at the blank, brick wall when a group of college kids came into view and spotted me."

Everyone froze and stared awkwardly at each other. Confused, one of the college kids asked if she was taking photos at the, er, wall. Going with it, Linda agreed. "Er... yeah, you know. All that artsy jazz. Put a black and white filter on it and up the contrast..." She trailed off, out of excuses, and forced to lift her camera and take a few lame photos of the blank wall. Satisfied, the group wandered off.

So do what you have to do: Scramble to save face, whip out of fashion blogger mode and pretend you're an art student, or fiddle with your camera until you're back in the clear. Whatever it is, just don't stop on account of other people.

4. When You Get Mistaken For A Celebrity And Have To Run With It

When on her honeymoon in Paris, Cee from Coco & Vera took advantage of the romantic scene of the illuminated Eiffel Tower, the quiet river bank, and the gown around her shoulders to snap some outfit pictures before their fancy dinner out. That's when the unthinkably cringe-y happened: "A group of tourists spotted us, and mistaking me for a celebrity, they swarmed, snapping pictures with their cell phones and cameras."

Feeling awkward as is, she didn't realize it could get any more uncomfortable. "But it only got worse when I distinctly heard the tour director say, 'That isn't Marion Cotillard.' The group dispersed in an instant and I went back to being a silly, shivering fashion blogger!"

Sometimes things are going to snowball out of awkward and right into embarrassing. But sticking with it shows strength of character and a real love for what you do.

5. When Weirdos Interrupt You And You Must Deal

Ali from The Drawing Mannequin is no stranger to fielding people who give in to their curiosity and stare during her photo sessions. "I’ve had a few awkward moments where I’ll be taking photos and a hunky dude will drive by in his truck and I’ll be like, oh yeah, I’m a model, I’m posing, check me out, pose-click-pose-click."

Sometimes, however, people get a kick out of not only staring, but interrupting. She recalls a moment in which a car decided to tear into loud doughnuts in a parking lot next to her photo location to distract her. "This car began doing doughnuts in the parking lot. Just a crud ton of doughnuts [...] Then the car paused; its windows were tinted. And then it simply drove off. My mom and I just stared at the entire ordeal, but carried on with the shoot as soon as the car (thankfully) left."

Sometimes people are going to be weird and will try to distract you or go out of their way to make you self-conscious. It's annoying, but you have to have a goal in mind. Stick with it and ignore them.

6. When You Work Through The Pain For The Shot

Indy from The Fabulosity Factor would argue that if you're truly passionate, sometimes a scrape and bump will have to be involved. She recalls a time she had on a full length, insanely pink, princess-y gown that she had thrifted and saved for a special fairytale themed photo shoot. For the first set of pictures, she sat herself on the ground and poured imaginary tea into miniature cups.

She didn't have a remote for her camera, so after every snap she'd jump up to line up the next one and run over to fall back into nibbling-tea-biscuits positions. That's when, mid pose, she felt something suddenly sharp. And — as the shutter snapped — she realized she sat on a bee who was now trapped under the hundreds of layers of tulle. A freak-out ensued, a butt cheek was injured, but, figuring everything was still pretty much in working order, she decided to finish up the shoot.

According to Indy, "I was in a lot of pain in a somewhat tender area, but what is a bit of pain for a few pretty pictures? Afterwards, a bag of frozen peas helped ease the pain and swelling, though did nothing to help my pride, which hurt almost as much."

When you work through a scratch or scuffle and push forward to capture the shot? You hear that? That's us slow clapping for you. That's determination and passion a person can admire.

7. When You Act A Fool For Fashion

It was 70 degrees outside, but fall was starting to unravel in cooler parts of the country. Excited to put my two-cents in on how to play with layers and jazz up boring outerwear on my blog Messages On A Napkin, I stepped outside in a grandpa-sized cocoon coat and a pompom beanie on my head, ignoring the blazing sun and situating myself in front of my neighbor's tree.

All was going well until said neighbor came out... wearing shorts and flip flops. There I was, standing like a crazy person in dead-of-winter gear, throwing fashion poses in front of his chestnut for no apparent reason. We stopped to stare at each other for a long excruciating minute — his eyes were all, "Dude, what the hell?" and mine were all, "Come on man, move it along." And then he quietly unlocked his car while still staring at me, before, with one last long look, he got in and left.

The second he rounded the corner, I went back to fake walking back and forth in front of the camera. Because, love.

More like this
What Is “Jello Skin”? The Latest Viral Trend To Know About
By Tomi Otekunrin
Kate Had A Solution When Tom Cruise Broke This Royal Rule At The 'Top Gun' Premiere
By Frances Stewart
Simply Sayo Doesn’t Consider Kpoetry Hard Work
By Jessica Morgan
What Is “Night Luxe?” Breaking Down TikTok’s New Aesthetic
By Courtney Young
Get Even More From Bustle — Sign Up For The Newsletter