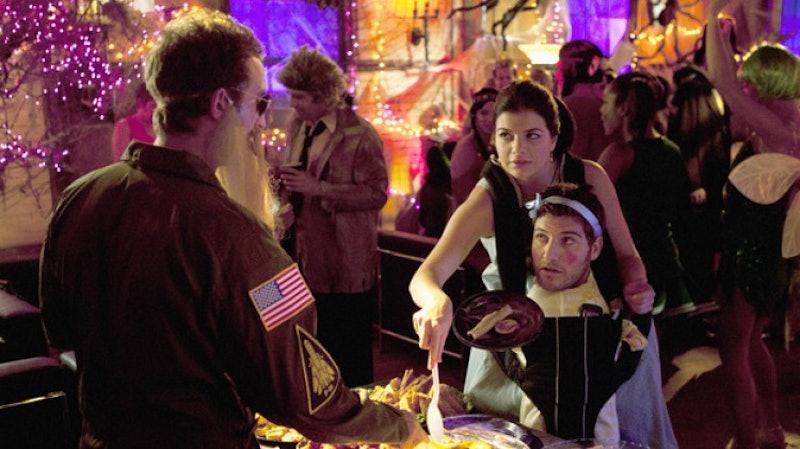 I'm not big on holidays, really, but there are two I really love: Halloween and Christmas. If pressed to answer what I enjoy about them, I won't really be able to tell you in any concrete terms; I just know they're the best. Now that October is finally here, Halloween is upon us, and in between shoving large fistfuls of candy corn and fun sized Snickers in my mouth, I'll be re-watching some of my favorite Halloween-themed episodes of my favorite TV shows. Not all of them are scary — in fact, most of them aren't — but they just make me feel so much more seasonal and in the Samhain spirit. What can I say? I'm a sucker for jack o'lanterns and crazy costumes.

If you're anything like me, you'll want to re-watch these episodes every year to amp you up for Halloween fun — or just for a night of turning all your lights out and pretending you're not home because you already ate all the candy you bought for the trick-or-treaters. You know, your pick. So sit back, rot your teeth out with candy apples, and check these out, because this special time only comes once a year, sadly.

1. Friends, "The One With The Halloween Party"

Chandler dressed as a rabbit, Ross as "Spud-nik", Monica as Catwoman... what more could you ask for?Friends did the best holiday-themed episodes ever, and this one was no different. A total classic!

There's no show I miss more than Happy Endings, which was over well before its time. The ensemble work in this episode is amazing, and each of the gang's Halloween costumes goes awry in a different and hilarious way. There's nothing like Penny and Max's Mom/Baby costume to get the tears of laughter flowing — especially when they go after the same guy.

If anyone could make a disastrous mockery of any holiday, it has to be Michael Scott. He dons a double head in papier-mache form as he contemplates which member of staff to lay off after Jan orders him to cut down, which is hilarious in a way I can't describe. The fact that all the women come dressed as cats is doubly amazing.

I kind of just want to say "Jess works in a haunted house" by way of introduction for this episode, and that should be enough to get you watching. However, if it's not enough for you, just know that Nick is deathly afraid of clowns.

5. Curb Your Enthusiasm "Trick Or Treat"

You either love Curb Your Enthusiasm or you hate it, and I'm in the former party because I love awkward humor. Larry refuses candy to two older teenage girls, only to discover the next day that they've TP'd his entire house, which is hilarious — particularly because of Larry's reaction.

Leslie and Andy getting drunk and TP-ing a local teenage jerk's house is probably the most amazing plot I can think of, and the fact that Louis C.K. is around (and that Tom dresses up like T-Pain) is icing on the cake.

7. Buffy The Vampire Slayer, "Fear Itself"

After a bunch of college kids decide to be dumb and set up a pentagram in some creepy house, the house comes alive, traps everybody inside, and then manifests their biggest fears to scare the ever-living crap out of them. It's the best Halloween episode of Buffy ever.

The Pritchett-Dunphy clan is hosting their annual haunted house, but only Claire is in the holiday spirit. Everyone else is having major doubts about various things, but, thankfully, Mitchell is there for comic relief, trying to get through his office in a Spider-Man costume without being seen. Yikes!

Bob's Burgers is amazing. Like, the entire show is. What's why "Full Bars" spoke to me so deeply — who didn't want to hit up the houses that were more likely to give you the bigger candy bars on Halloween? Plus, Gene in a Queen Latifah costume will never be matched.

Letting Jenna organize anything is probably a bad idea, but leaving her and the writers behind as they try to get into "big gay Halloween parties" is an even worse one. Luckily, the fallout will keep you laughing.

I feel like I was way too young to truly understand and appreciate Frasier when it was on the air, but that didn't keep me from loving it. Niles throwing a Halloween party in which guests had to dress up like literary characters was genius, and one of my favorite things ever.

Louie takes his daughters trick-or-treating and keeps the festivities going until well after dark, when they run into some troublemakers that scare Louie but inspire his youngest daughter to stand up to them. Like much of Louie, this episode is hilarious and heartwarming, which is why I love it.

I can't tell you how many times I've binge-watched pretty much the entire series of Scrubs, and I have no regrets. "My Big Brother". JD's Halloween is pretty much ruined when his brother starts getting along with Elliott a little too well. Oh, and Laverne dresses up like Raggedy Ann, which is really all you need to know.