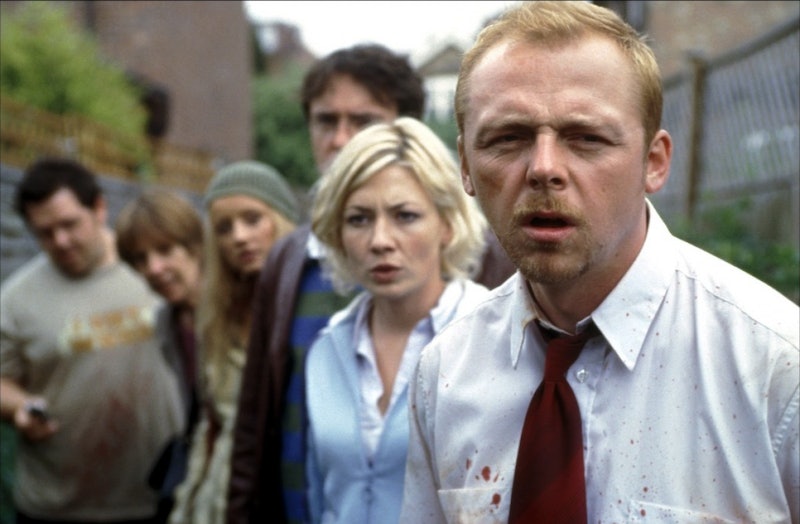 Do you know what September represents to me? A roadblock between me and jack-o'-lanterns, candy shaped liked pumpkins, and costume planning. The moment summer ends, I am ready for the holiday season to begin, and everyone knows Halloween is the best holiday of them all. I love having an entire month set aside to indulge in ghost stories, sweets, and not too scary scares. Halloween makes me feel more like a kid again than even Christmas because I don't have to buy anyone presents and I can watch It's the Great Pumpkin, Charlie Brown without judgment. If you are like me, then you are ready to get the party started now, and there is no better way to prepare for Halloween than by watching scary movies.

The 13 movies on this list will put you in a Halloween state of mind with their zombies, ghosts, and endless jump-inducing scares. From horror classics to hidden indie gems no one should watch without a nightlight on, these movies will have you ready to buy out Target's Halloween aisle immediately. The best news is, by the time you work your way through the list, October will be here and you can start stringing cotton cobwebs all over your house.

Let's start with one of the funniest and creepiest animated films of recent memory. Monster House will ease you into Halloween mode with its clever plot twists, people-eating house, and group of intrepid kids. There is a surprisingly moving story behind the tale of a house that instinctively hates children that makes the horror feel grounded in a sad reality. Also, there are uvula jokes, so there's something for everyone, really.

It's not like you need another excuse to re-watch Shaun of the Dead, but just in case, the zombie horror/comedy is a modern classic that never fails to get me excited for Halloween.

One of the horror genre's most enduring tropes is the tale of the spooky cabin in the woods. Leave it to Drew Goddard and Joss Whedon to turn the trope on its head to produce a story of corporate evilness and supernatural manipulation (with bonus baby Chris Hemsworth).

Your mileage may vary with The Innkeepers. People either seem to love or hate this subtle, slow-burn horror comedy about two amateur ghost hunters who work at a haunted inn. For a long while, the movie is nothing more than a funny character study and then the scares get real, fast.

This movie made me scared of everything as a child — paintings, diabetes, candy, Anjelica Huston — and the sad thing is it is still as scarring now as it was two decades ago.

The ultimate "be careful what you wish for" tale, Coraline is visually stunning and a total emotional minefield as Coraline begins to realize there is something very wrong with her "other" parents.

Wipe the horrible 2015 remake from your mind palace with the original in all of its terrifying (supposedly PG rated) glory. In my house, it's not Halloween until I've watched The Poltergeist.

The biggest fears people have about marriage seem to concern their partner changing or them changing after they put a ring on it. The Honeymoon takes this idea and runs with it in an awesomely unsettling piece of body horror that will leave you with chills.

I'm not a big fan of the slasher genre, but I make an exception for Scream. The movie sends up every horror trope imaginable and in the process creates a movie that is still compelling to watch even when you know who is behind the ghostface mask.

Ghosts and Halloween go together better than Frankenberry cereal and milk. The Others just happens to be a superior ghost story that remains scary no matter how many times you watch it.

Halloween will never come if you don't watch Hocus Pocus. That is a totally true fact that I just made up.

If for some reason you haven't seen this classic, then make this the year you finally watch it. An American Werewolf In London truly is the best werewolf movie ever made, and while it is scary, it's not too scary. The transformation scene is a must see for any movie fan for the cinematography and special effects.

I saved the scariest for last. There's something all too real about The Babadook that makes it crawl under your skin. Watch this one with friends and then carve pumpkins afterward. Trust me, you'll need to do something relaxing in order to get to sleep that night.

I hope these movies help Halloween get here just a little bit faster for you. Enjoy them now and you will be donning your Halloween costume in no time.

More like this
15 Romantic Movies On Netflix That Are Perfect For Snuggling Up On The Couch
By Rachel Simon and Grace Wehniainen
The 13 Sexiest Movies On HBO To Stream Now
By Alyssa Lapid and Lia Beck
15 Intriguing Movies On Netflix That Are Based On True Events
By Mary Kate McGrath, Shannon Barbour and Grace Wehniainen
'Elvis,' 'Walk The Line' & 10 Other Movies Where The Actors Actually Sing
By Radhika Menon
Get Even More From Bustle — Sign Up For The Newsletter