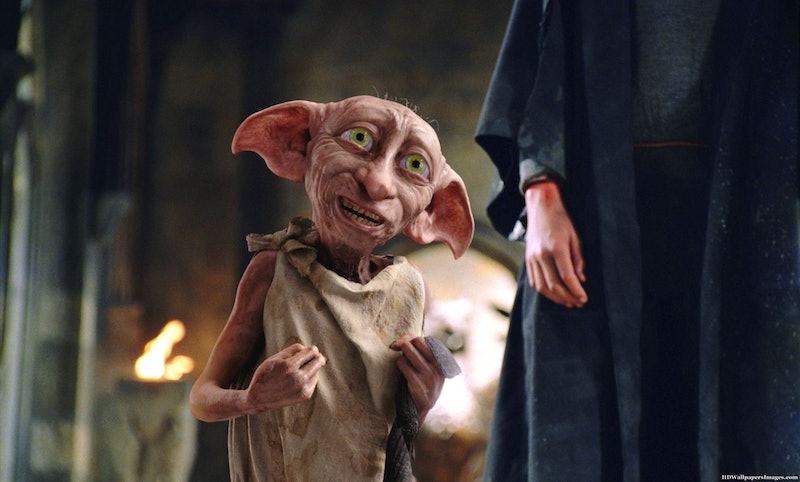 Hold on tight to your emotions, everyone, because these people leaving socks to free Dobby at the Warner Bros Studio Hogwarts tour are about to smash them into smithereens. So hey, remember that time that Dobby died and you were so emotionally devastated that your tears marred the pages of your book and nearly got you kicked out of your local theater? It's clearly time for Round Three, thanks to the crushingly adorable gesture of these strangers in London. The life size Dobby model behind a pane of glass on the tour depicts him after his death — because everything is the worst— and people have been leaving their socks on the placard outside of it in a group effort to set him ~free~ all over again.

For those of you who are muddled on your Harry Potter history (I won't judge), socks are Dobby's very most favorite type of clothes. We all know house elves need to be presented with clothes from their masters to be freed, and Harry tricking Lucius Malfoy into giving Dobby a sock was the HELL YEAH that was heard round the Wizarding world. From then on Dobby went on to collect all sorts of socks and hats, thanks to Hermione's tireless S.P.E.W. efforts, and the steadfast house elf remained a crucial player in helping Harry Potter defeat the Dark Lord. Here's how modern day Muggles are paying tribute to him:

No, YOU'RE crying over a fictional creature at your desk in an office full of fellow adults.

Warner Bros Studios hasn't yet responded to the sock-leaving, but the fact that they left them there for Dobby is really all the response fans need. A fitting tribute to a most noble friend.

More like this
Ottessa Moshfegh Is Happy To Be Your “It” Girl
By Arya Roshanian
'The Summer I Turned Pretty' Book Ending Is An Emotional Rollercoaster
By K.W. Colyard
5 Gripping Books To Read From Women’s Prize For Fiction Winner Ruth Ozeki
By El Hunt
Nina LaCour Had To Grow Up To Write 'Yerba Buena'
By Casey McQuiston
Get Even More From Bustle — Sign Up For The Newsletter