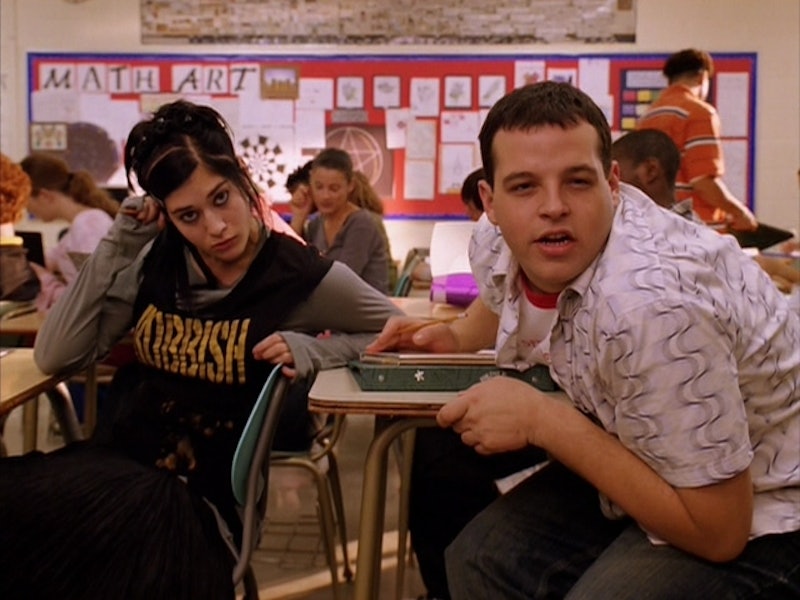 Finding funny Halloween costumes for couples can be even harder than finding normal couples costumes. Do you go with a classic pairing that everyone will recognize? Or is the topical/shocking/hilarious route more apt to score you that trophy at the end of the night? And then it's like, What kind of statement are we making as a couple with this costume? There are so many options, and seemingly so little time to plan. That's mainly because who even starts thinking about Halloween before the leaves change? I mean, every day leading up to that is basically still summer, and Halloween seems months and months away.

But when it comes down to it, funny is the way to go. If you can make someone exclaim, "OMG, that is the best costume I've ever seen!" immediately followed by a giggly scream of delight, then you have yourself a successful Halloween. And not all clever couples costumes come from a Halloween retailer, either. Many of them you can make yourself with the right outfit and a dash of Pinterest craftiness. Here are some hilarious couples costumes for Halloween that are bound to give you a laugh and some serious inspiration.

Are there two things in this world that chicks love more than cardigans and autumn-flavored coffee drinks? I THINK NOT.

What you'll need: One of you gets to rock the oversized sweater and leggings, and that's it. The other will need a white T-shirt with checked boxes, a clearly misspelled name, and "PSL" written on it to resemble the standard Starbucks cup. Then maybe a paper plate tied on to a hat to represent the coffee top.

This might be the only fashion trend that encourages additional, practical layers. In most places, Halloween is a chilly day, so dressing as a lumbersexual pair will be comfortable and oh so sexy.

No matter which role you're playing here, you've won.

What you'll need: This costume from Spirit Halloween, and real wine and cheese for props and/or snacking purposes.

Gwen and Gavin. Jen and Ben. Kaley and Ryan. Amy and Nick. This has been a truly disappointing year for A-list love. Let's celebrate all the love lost.

What you'll need: A Cupid-like costume or outfit (as seen above), and Grim Reaper-ish attire. Then tape or safety pin photos of the newly-departed romances onto the Grim Reaper's robe or hoodie.

There's no greater passion than what between a squirrel and a nut. I know it only goes one way, but still. It's intense.

6. Curious George And The Man In The Yellow Hat

I mean, how adorbs is this.

What you'll need: You could take the easy route and go with this monkey costume from Amazon, and this Man in the Yellow Hat costume. Or you could put together a brown outfit and yellow outfit with monkey ears, and a yellow hat to complete the look.

7. Leslie Knope And A Waffle

Sure, Leslie and Ben were all kinds of perfect, but she loved waffles a whole lot, too. What would happen if she needed to choose? Either way, we know work would come in third.

What you'll need: Leslie's look was relatively bland, and that's because her perky ambition was almost blinding. So all you really need is a practical work suit and black heels. A blond wig would be a bonus for any non-blond. And for the waffle, if you can't find any attire with an actual waffle on it, you could always go the DIY route with a beige shirt, a dark brown marker (for those square ridges), and a picture of butter to safety pin to the center.

For when there's a literal spark between two people.

What you'll need: For the victim, take a pair of jeans, an umbrella, and a white T-shirt, and shred 'em up. For the lightning bolt, you can either construct a giant yellow bolt out of paper or fabric and wear it across the front, or you could rock a lightning bolt hoodie like this on Amazon.

In honor of the Seinfeld binge session we all took part in this summer.

What you'll need: These two are the king and queen of Normcore. And while Jerry's signature style is pretty dull, Elaine's is feminist '90s chic with a tough New Yorker edge to it. For Jerry, go with jeans, a solid-color button-up, and white sneakers. For Elaine, go with any dressy outfit, but make sure there's a good amount of black, and oxfords are a MUST.

This costume is so hilarious because you have to stay connected to the other half of the s'more all night long in order for it to make sense. So hopefully you both are cool with zero personal space.

What you'll need: Two beige pillows and velcro, rope, or large safety pins in order to wear them on your backs. Then one person wears a white hoodie to represent the gooey marshmallow, and the other wears a brown Hershey's shirt or sweatshirt to represent the chocolate. Boom.

I know, I know — two Parks and Rec costumes? But there will never be a better, more loving alter-ego couple than Janet and Burt, so there.

What you'll need: Because Andy and April were broke at the time, you won't need much to recreate the look. For Ms. Snakehole, go with a plain black dress, fishnet tights, black heels, and a black hat with a veil. Oh, and pears! For Agent Macklin, go with a tie, white shirt, any pair of pants you want, aviator sunglasses, and navy blue windbreaker with "FBI" spelled out with yellow tape on the front and back.

What you'll need: If you're going to do this, you've gotta REALLY do it. Attach the competing brand logos to the front of the tops you wear, and then deck yourselves out with pizza, soda, or burger attire, accessories, and footwear. And if you happen to hand out pizza slices to everyone around you, you'll make friends quickly.

She's fallen and she can't get up, you guys!

What you'll need: An old lady wig, a cane, orthopedic shoes, and a house dress. Then, for the Life Alert button, you can just draw one on a white T-shirt, and there you have it!

What's Trump's platform, again? I don't even know, because his entire campaign has been overshadowed by the fact that he's such a misogynist. This pairing is sadly too perfect.

What you'll need: For Trump, go with a bad wig, a perma sourpuss expression, and a suit and tie. For sexism, go with a white T-shirt with "SEXISM" written across the chest, and then just record all of his sexist comments to date. I'm guessing the shirt will be covered in idiotic quotes by the time you're done.

Make sure the person dressed as Damian screams, "She doesn't even go here!" every 30 minutes.

What you'll need: For Janis, sport a unique and edgy updo, a rocker T-shirt, billowy skirt, striped leggings, and black Chucks. Damian only needs three things: jeans, aviators, and a light blue hoodie with the hood tied tight around the face.

Chris Pratt's character from Jurassic World and a dinosaur are the new "it" pair of the franchise. Plus, it's just more fun to pretend to be a dinosaur.

What you'll need: This one is pretty simple. For Owen, just wear a white henley top with dark chinos and brown boots. For the dinosaur, any dino costume will do.

For the couple who caught each other's heart while trying to catch them all.

What you'll need: You'd be surprised how easy it is to find a Pikachu onesie on Amazon. Then, all you need is a blue vest and a red and white hat. Done!

18. Khaleesi And Her Dragon

There's no greater love on GoT than that between Daenerys and her dragon babies. If you're dateless this Halloween and prefer the company of your favorite canine, feel free to dress them up as a dragon. Otherwise, fight it out amongst yourselves to see which one gets which costume, because both are irrefutably awesome.

What you'll need: A goddess-y dress, a blond wig, and gold gladiator sandals for the Mother of Dragons, and then a dragon costume (or at least a T-shirt with a dragon on it), for one of her babies.

Now we know where they both are. Together.

What you'll need: For Waldo: a red striped shirt, black glasses, jeans, and a red striped hat. For Carmen: a big red hat, red trench coat, yellow scarf, and a black shirt underneath.

Pair up any two people from this show, and it would make a stellar costume, but let's go with Andy and Katie, because her style is rad and his level of asshattery is ON POINT.

What you'll need: For Andy: a denim jacket, matching jeans, rocker tee, and a puka shell necklace if you can find one. For Katie: wedge sandals, a crop top, and fitted jean shorts.