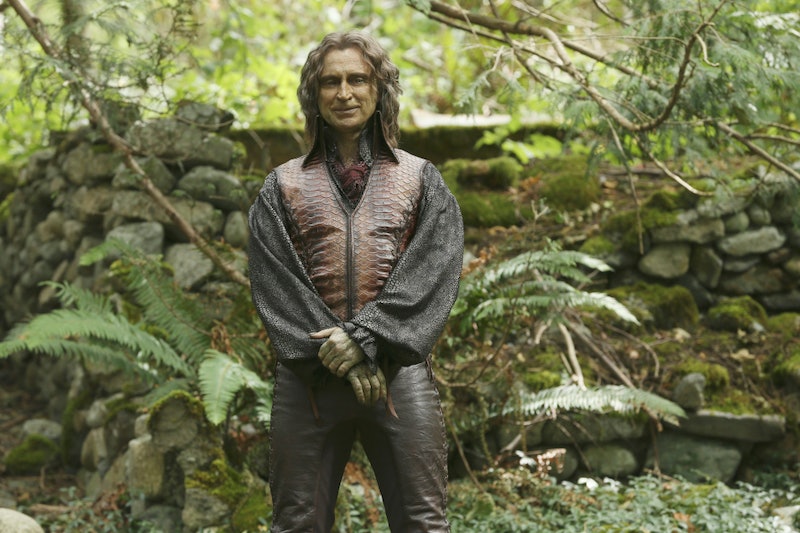 If Once Upon a Time has taught us anything over the years (aside from the surprising fact that guyliner can be super sexy), it's that all magic comes with a price. So by that logic, it stems to reason that the more magically powerful you are, the greater the price will be. Makes sense, right? Well, what if you're the most powerful wizard in the world? Surely, that's bound to come with some sort of backlash, and I think I know what it might be. You see, I'm strongly starting to consider the possibility that Merlin is the original Dark One on Once Upon a Time . We know that Season 5 is going to dive dagger-deep into the Dark One mythology and explain not only who the original Dark One is, but why they even exist in the first place. And I have a feeling that Merlin will play a vital role in this particular tale.

After all, he's supposedly the only one who can banish the darkness. Perhaps that's not just due to the fact that he's an extremely powerful magical being. Maybe it's because he's actually the reason the Dark One even exists at all, whether it was unintentional or not. If magic does indeed come with a various array of consequences, then no one would pay a bigger price than the almighty Merlin himself.

Showrunners Edward Kitsis and Adam Horowitz recently answered some of Entertainment Weekly's burning questions, one of which involved what Merlin's role will be in all of this. And even though you may not have realized it at the time, Merlin has already made his OUAT debut when he appeared to Emma as a movie usher in the Season 5 premiere. "He warned Emma not to pull the sword," Kitsis explains. "We saw Arthur pull the sword, and we realize the Dark One dagger and Excalibur were meant to be whole. We’re going to explain to you why that is, why Merlin is where he is."

As Arthur revealed last week, Merlin has been missing for quite some time and it is supposedly Emma's destiny to reunite him with everyone. So then why does Merlin not want Emma to go anywhere near Excalibur? And let's not forget that he also warned her that whenever she does something bad, no matter how well intentioned her motives are, it will always lead to terrible things. It's almost as if he knew she would one day become the Dark One and was giving her advice… maybe even based on personal experience. "Why he was warning Emma all those years before," Horowitz teases. "It’s not something we’re going to make you wait the whole half season for."

Look, I may be going too far out on a limb here, but it's clear that there's a bigger connection between Merlin, Emma, and the Dark One history than meets the eye. The sword and dagger were separated for a reason. It may have even been done by Merlin himself. Perhaps reuniting the two pieces reverts Merlin back to his Dark One days? Anything is possible at this point, but given that he still appears to be MIA even after the six-week time jump, we may only be seeing Merlin in flashback form, at least for a while. And if we do ever see him in the present-day, it may be a darker version of him than we ever knew existed. Prepare yourselves, dearies.