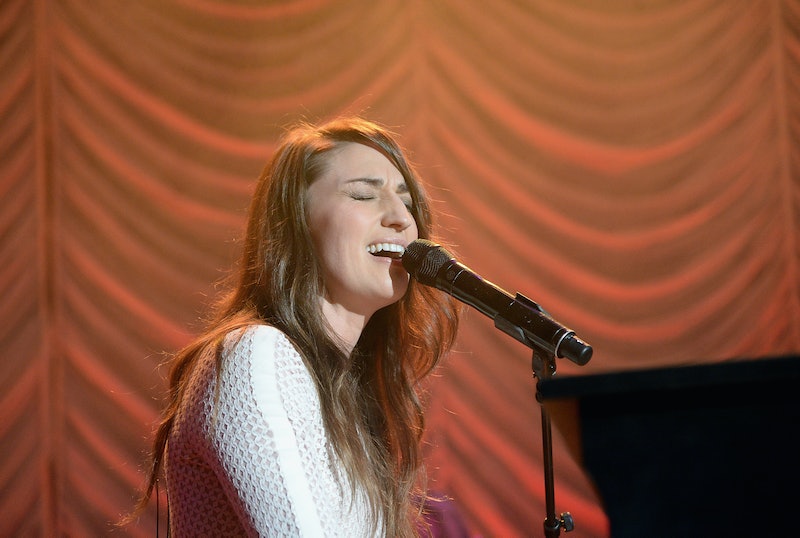 I like to think I have pretty good taste in music, and I really love pop in particular. There's nothing better than a big pop number to really make you feel like life is big and amazing and beautiful — oh, and a lot of fun, too. With that in mind, it's no surprise that I've loved Sara Bareilles since "Love Song" back in 2007. I've been following her career ever since, and every time she releases a new single, I fall in love with her music all over again. Last year, she wrote the music and lyrics to the Waitress musical (based on the 2007 film of the same name), and last week she released a song from it called "She Used To Be Mine". A new single should mean a new album, right? Turns out, the track will serve as the lead single to Bareilles' new album What’s Inside: Songs From Waitress, which is due out next month. Yay!

To say that Bareilles has been busy lately is an understatement. In addition to writing the music for Waitress, she recently penned a memoir entitled Sounds Like Me: My Life (So Far) in Song that's coming out on October 6 and will also spawn a book tour. But we want to know more about What's Inside, right?

What's Inside: Songs From Waitress will be Bareilles' sixth album. Her last album, 2013's The Blessed Unrest, earned her an Album of the Year nomination at the Grammys. Maybe this new album will finally get her the trophy she so clearly deserves. Either way, one thing's for sure: it'll be amazing to listen to.

More like this
Becky G Once Had A Fear Of Speaking Spanish. Now She's Topping The Latin Charts.
By Tess Garcia
BTS Reveals 'Proof' Will Be 3-CD Album & Here Are The Tracklists
By Grace Wehniainen and Alyssa Lapid
Fans Think Adele & Rich Paul Have Bought Their First Home Together
By Sam Ramsden
Kourtney & Travis Crashed His Daughter’s TikTok Live In Their 2nd Wedding Outfits
By Grace Wehniainen
Get Even More From Bustle — Sign Up For The Newsletter