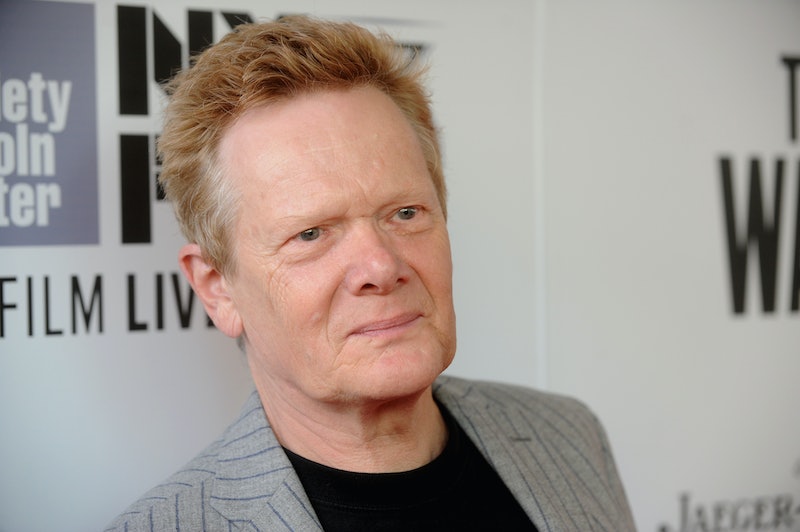 If you're somebody who gets nauseous from looking down at the view from inside a skyscraper, you may want to avoid the new movie The Walk. In it, Joseph Gordon-Levitt plays Philippe Petit, a real-life French high-wire artist who rose to fame (no pun intended) after walking between the Twin Towers on a tightrope in 1974. The film focuses on the 1974 walk in particular, but there are a great number of other famous Philippe Petit stunts. Because naturally, any person who would traverse the World Trade Center on a tightrope probably isn't stepping onto the wire for the first time— and he's also probably not likely to stop doing it anytime soon.

In fact, Petit's first high-wire performance was in 1971 at the age of 22, but he started teaching the art to himself at the ripe age of 16. He told The New Yorker, "it is not difficult to walk on a tightrope. But you need to have passion, and you have to work madly, to practice all day long." That actually sounds fairly difficult to me, but Petit's performances made it look effortless, like he was walking on air. His natural agility on the wire (and perhaps some brazen courage) enabled him to attempt many jaw-dropping feats over the years. Here are just a few.

Petit was living in Paris when he decided to execute his first major performance at Notre Dame on June 26, 1971. He crossed between the two towers of the cathedral, taking a break to casually lie down on the wire and juggle several clubs. He was arrested thereafter, but Petit was hooked on the thrill and knew that the walk at Notre Dame wouldn't be his last.

Several decades after Notre Dame, Petit strung up his wires to another famous Parisian landmark: the Eiffel Tower. But he wasn't arrested this time because the stunt was commissioned by the mayor of Paris to celebrate the 200th anniversary of The Declaration of the Rights of Man. The artist crossed over the Seine River to the second story of the tower as thousands of Parisians watched from below.

In the early 2000s, Petit orchestrated several performances in New York City. To announce the publication of his memoir, Petit erected a high-wire contraption at the "Crystal Palace" in the middle of NYC's Jacob K. Javits Convention Center and, naturally, proceeded to cross it. A lot of people would've just scheduled a press conference to announce their book, but that's not Petit's style.

The Walk shows the gut-wrenching nature of Petit's stroll across the Twin Towers, but the artist gave many additional spectacular performances that are worthing looking up. Just whatever you do, don't look down.