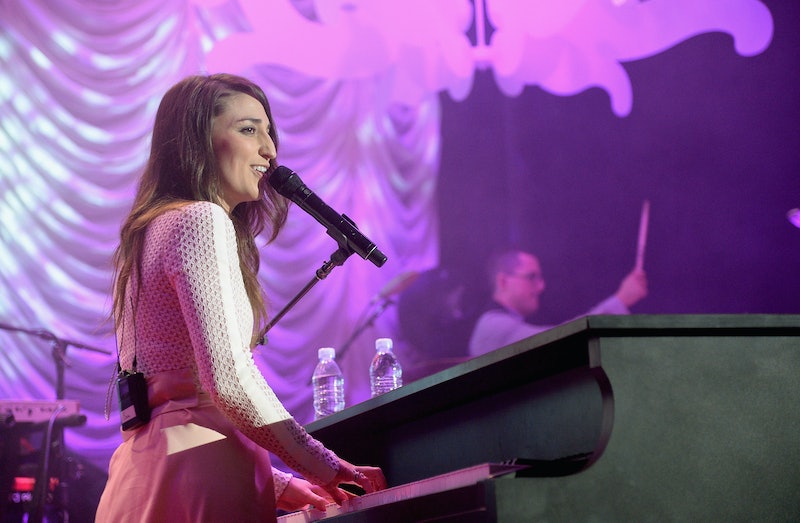 Are you ready to feel all of the feels? If you don't think you can handle a flood of emotions, I suggest that you don't listen to Sara Bareilles' new song "She Used To Be Mine." The song is a gut-wrencher: Bareilles sings from the perspective of a woman who has completely lost sight of who she is and finds her self-worth is now virtually non-existent. The song may be devastating, but there is good news about it: Bareilles' "She Used To Be Mine" is on Spotify, so feel free to listen to it on repeat until it officially breaks your heart.

"She Used To Be Mine" may feature some of the classic traits of a Bareilles tune (like gorgeous vocals and simple piano for the instrumentals), but the singer-songwriter didn't actually pen the song for herself. Bareilles wrote "She Used To Be Mine" as a track for the upcoming Broadway musical Waitress, which is slated to his the Great White Way in 2016. Fortunately, you won't have to wait until 2016 to own an album featuring "She Used To Be Mine," or to hear other songs from the upcoming musical: according to Radio.com, Bareilles will release her album What's Inside: Songs From Waitress on Nov. 6.

Bareilles' musical is based on the 2007 film Waitress, which stars The Americans' Keri Russell as a down-on-her-luck waitress named Jenna who is stuck in a bad marriage when she finds out that she is pregnant. The musical has already completed a nearly two-month long run the American Repertory Theater in Cambridge, Mass., and will reportedly begin previews on Broadway beginning in April of 2016.

"She Used To Be Mine" certainly stands on its own, but, when looked at through the lens of Waitress' main character Jenna, it's clear that it's the perfect anthem for her. Here are the lyrics to the first chorus:

She's imperfect but she triesShe is good but she lies.She is hard on herself.She is broken but won't ask for help.

If there's one clue that this song gives us about the musical, it's that it appears that it will follow Jenna's emotional arc from the very beginning. This song is Jenna's anthem — and the songs lyrics about her "apron" and the diner "patrons" certainly sound like it is — then it clearly matches up with the despair Jenna feels at the beginning of the film. It may not be a song for Bareilles, but it terms of emotional power, this track still cuts deep.

More like this
After 'Heartstopper' Used This Indie Artist’s Song, Streams For It Soared 8,000%
By Alyssa Lapid
Watch The Dramatic First Trailer For Netflix's Jennifer Lopez Documentary
By Alyssa Lapid
Lisa Marie Presley Reviewed Baz Luhrmann’s ‘Elvis’ Movie On Twitter
By Grace Wehniainen
'Dirty Dancing's Jennifer Grey Wants Harry Styles To Be The Sequel’s Love Interest
By Grace Wehniainen
Get Even More From Bustle — Sign Up For The Newsletter