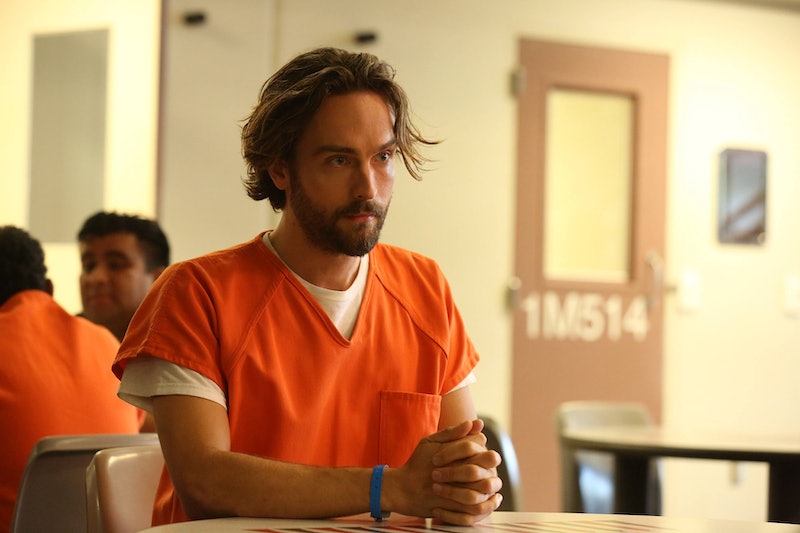 Well folks, I definitely wasn't expecting this. The Sleepy Hollow Season 3 premiere began with quite the bang as Abbie learns that after nine months of no communication, Ichabod is now calling her to come bail him out of prison. That's right fans, Ichabod is in the slammer, and the reason for his incarceration is of course directly related to what will come next for the witnesses in Season 3. So what in the world did Ichabod get arrested for in the first place? It turns out he was attempting to "improperly import cultural heritage antiquities" into the country from his ancestral home in Scotland. The exact item he was smuggling in was a tablet that directly translates to a message that will help the witnesses identify their next mission, the second of the seven they are to face together. But, what they don't realize until much later is exactly what they're up against. In fact, I don't quite understand yet either.

But, first let's go back to the beginning for a moment and take some time to really appreciate Ichabod in jail. For the first time in nine months, Abbie sees Ichabod again in the full orange jumpsuit. It's both a sight for sore eyes and a huge surprise. It took Ichabod five days to actually call Abbie to get him out of jail, and he only did it because Katrina's necklace that he has been wearing with remnants of Abraham's soul inside burned him and then cracked. Basically that means something truly terrible has happened to Abraham and the witnesses mission is now to begin. So, what is their mission?

To explain in the shortest possible, nutshell way, it's basically the apocalypse 2.0. Ichabod explains, after Abbie gets him out, that the tablet had instructions for the witnesses. Before he had it taken away from him by Customs, he was able to translate a small piece of the puzzle: "The Legend of Sleepy Hollow." Ichabod takes this to mean that their new purpose has been uncovered, but Abbie's not quite on board. To be fair, she's spent nine months away from Crane and all the witness madness, she's now an FBI agent having gone through Quantico training and everything.

But, Abbie quickly realizes they are dealing with something, though it takes some convincing that it's not just a residual demon or monster they are after. Now after realizing that Abraham was destroyed for some powerful, mysterious force and now Pandora, the new threat, has the power of fear on her side, it's a little frightening to think of what could come next. For one, the witnesses and Jenny are extremely behind on what's to come next. And, secondly, they're down quite a few helpers with Irving gone and Hawley being MIA on his own mission for quite some time. Can Ichabod and Abbie really get through this? Can they actually stop another threat of a possible end to the world? If we've learned anything from two seasons of this fight, they can clearly do anything.