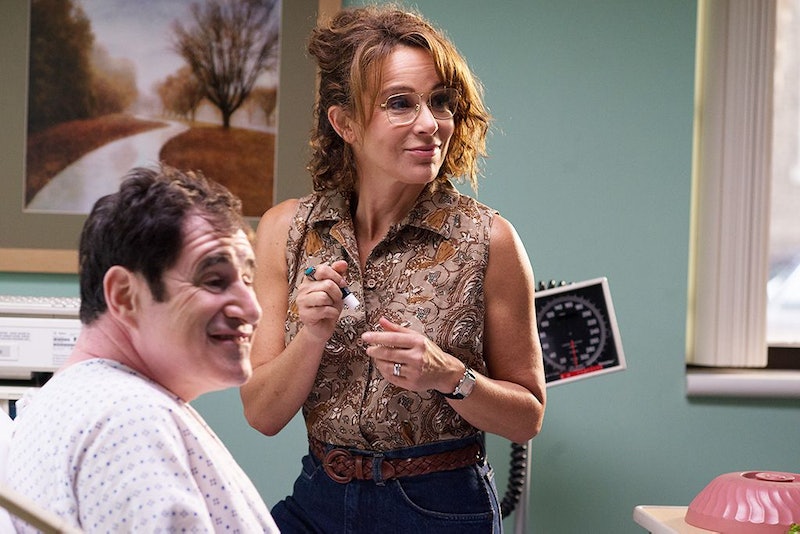 Forget about any plans you had scheduled for this weekend because you're going to want to spend any free time you have, marathoning your way through Amazon's new series, Red Oaks . This coming of age '80s sitcom centers around the life of NYU student David (played by Craig Roberts), who is grappling with the pressures of his pending adulthood and decides to take a summer job working as a tennis pro at a high-end country club. And upon interacting with an array of memorable characters — ranging from his parents (played by Richard Kind and Jennifer Grey) to the club's formidable owner (played by Paul Reiser) — inevitable hilarity ensues. But before you dive headfirst into this new TV obsession, I have a few Red Oaks Season 1 spoilers that you might be interested in hearing about.

I had the pleasure of sitting down to chat with the amazing cast of Red Oaks, who were very eager to dish on a few exciting teasers fans can expect throughout the show's first season. However, to add an extra layer of intrigue, I had them describe the series using only emojis, which I've already taken it upon myself to decipher. (Or at least tried to decipher as best I could.) So, in a collective effort, here are the clues the cast came up with:

Let's try to interpret this arrangement the best we can, shall we?

This is a show that takes place over the course of summer vacation, so it makes sense that these iconic representations of summer would come into play. Though, I'll admit that I love eating ice cream, regardless of what season it is.

While some may think the milk bottle represents someone getting pregnant on the show, I'm more inclined to believe that this symbolizes David's growth throughout the season as he learns what it is that he wants out of life. As for the two women sharing one heart, I'm willing to bet it has to do with David's mom, who realizes that her romantic interests lie well outside of her marriage. Perhaps David even catches his mom in some compromising situations that leave him feeling both blinded and flushed.

Obviously, the tennis balls make sense, given that the majority of this show takes place at a tennis pro country club. However, Ennis Esmer, who plays David's boss, Nash, made sure that I noted why he specifically put two tennis balls, instead of one. (If your mind is currently in the gutter right now, that's entirely what I was going for, so well done.) Taking that into account, I'd say that Nash is going to have several different conquests (some of which that aren't his wife) throughout the season. As for the upward directory of the chart, there's a distinct possibility that Nash might also come into some money. Though, considering that the next image is of money with a set of wings on it, maybe it's a short-lived increase in income? Or he simply went through the money really quickly by purchasing a boat.

Given that these were Wheeler's (played by Oliver Cooper) selection of images, I'd say that the first emoji has less to do with the actual gun and more to do with the powder inside the gun, if you catch my drift. After that, I honestly have no clue what the rest of these images could represent, though, when Cooper announced that he was adding the telescope in, the rest of the cast burst into laughter. I'm officially intrigued!

More like this
Oops! The 'Stranger Things' Monopoly Game Has Spoilers For Season 4
By Alyssa Lapid
Marvel's 'She-Hulk' Trailer Is Finally Here & The Hulk Lends A Big Helping Hand
By Grace Wehniainen
Everything To Know About Marvel's 'Echo' Series On Disney+
By Grace Wehniainen
Everything To Know About The Possibility Of 'The Essex Serpent' Season 2
By Rachel Mantock
Get Even More From Bustle — Sign Up For The Newsletter