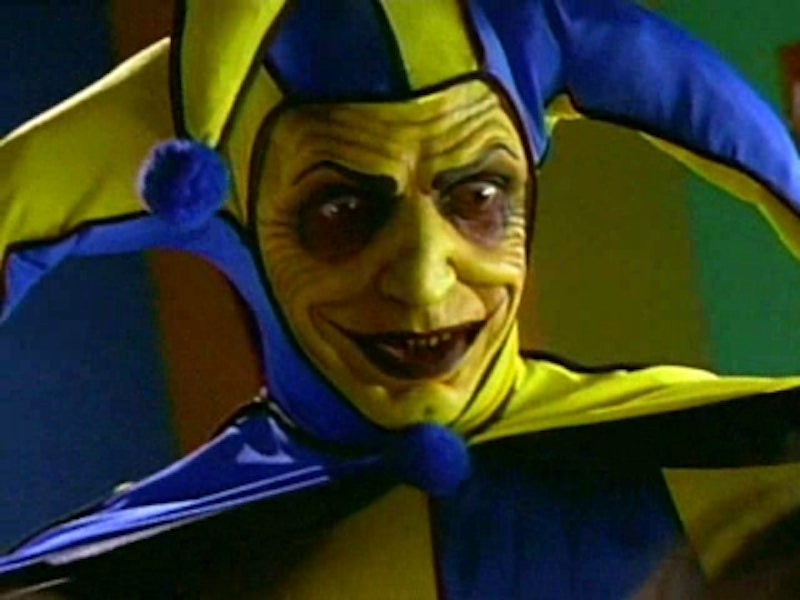 In my 20s, I was lucky enough to re-watch more than a few Are You Afraid Of The Dark episodes, and, while it's spookiness hasn't gotten old, my skepticism seems to have made me old. Like, as much as I would've loved to be a Midnight Society member (although lord knows I can't tell a good story to save my life), I am very concerned about the well-being of all of those children.

So here are 11 things that I've retrospectively considered having watched Are You Afraid Of The Dark as an adult.

1. The Match In The Intro Seemingly Lights Itself

After the opening credits (if you can even call it that, you say "opening credits" I say "concentrated spookiness"), we see a match being lifted up and set on fire to illuminate the title. However, there is no scratching motion to set the match off, which is really peculiar and spooky. Upon closer inspection, there seems to be a small spark of light on the match when it first appears, so perhaps it was scratched before, but that's still an appropriately ominous way to start a show like this.

2. It's Very Questionable That The Midnight Society Is Practicing Fire Safety

I know they're very conscientious about putting the fire out at the end of the night, but like, why do they do it like that? The whole throwing dirt on the flames to make it blow up for dramatic effect sounds like a really poor idea. Especially since it's the '90s, and at least half of these kids are wearing flannel.

"Submitted for the approval of the midnight society" is a direct callback to Rod Serling's "submitted for your approval" in the beginning of each Twilight Zone episode. I know this, because research, but also because my ex made me watch like 20 episodes of The Twilight Zone one night.

4. Where Are These Kids Parents?

I know they're supposed to be teenagers, but, as a 20-something, some of them look like literal children. How is it cool for their parents to be like, "Oh, you just want to go into the woods and pump each other with nightmare fuel all night? Sure, sounds legit."

5. It's Not-So-Often That People Actually Die In These Stories

More often than not, there are ghostly presences, re-animated corpses, and things of that ilk, but it's rare that anyone gets murdered mid-story.

OK, in short, "The Tale Of The Prom Queen" is about a girl who was killed in a hit-and-run on prom night in 1957, and three teens find her ghost. In a shocking twist, one of the teens ends up being the dead prom girl all along. All of a sudden, the girl twirls around, and she has a beautiful '50s ensemble with a pale blue dress. But were those Brooke Shield eyebrows and long straight hair historically accurate depictions of the era? I'm not sure about that. And if you can't count on a Nickelodeon children's show from the '90s to be historically accurate, what can you count on?

7. Nobody Seemed To Get How Viruses Worked In The 1990s

In "The Tale Of The Renegade Virus," how is the virus a real manifestation that wants to bring chaos into the real world? If you infect the computer, you're pretty much killing anything worthwhile to begin with, so I don't think it's worth the extra effort. Also, that constant laughing is the scariest tick. How am I supposed to sleep tonight?

8. The Ghastly Grinner Is Still The Absolutely Terrifying Villain

You'd think that mixing primary colors would un-spookify him, but I will go on the record that I saw "The Tale Of The Ghastly Grinner" with my ex (yes, same ex as before, he has very specific tastes), and he is still was way too freaky for me. Um, the Ghastly Grinner, not my ex. I think it's something about the perpetual Joker grin and perpetual blue drool.

Little Gosling co-stars in the episode "The Tale of Station 109.1," where he accidentally stumbles upon a radio station for the dimensionally challenged dead. Rude.

10. It's Never Really Explained Why The First Group Disbanded

People shift in and out of the Midnight Society throughout the series. Some members move away, and some just get phased out (whatever happened to Eric? I'm sure that's worth a fireside tale). But, somehow, inexplicably, the first group of characters disbanded, and Tucker had to revive it with his friends. Did people graduate? Did they get a reanimated corpse murder them in a pool? It's just weird.

11. How Did They Figure Out Who Got To Bring The Red Bucket?

I know Gary usually got to do the honors in terms of putting the fire out (good job, that is Smokey the Bear approved), but it feels awkward to think that him, or any of them, were lugging a huge bucket of water to the grounds. But whatever, I think it's important that the titular "dark" gets an appearance during all of this.

All in all, Are You Afraid Of The Dark holds up pretty well in terms of fear factor. But really, it's the fact that these kids are just partying in the dark and playing with fire that makes me feel the most scared. Maybe I'm just getting old... and nothing is scarier than the idea of that.