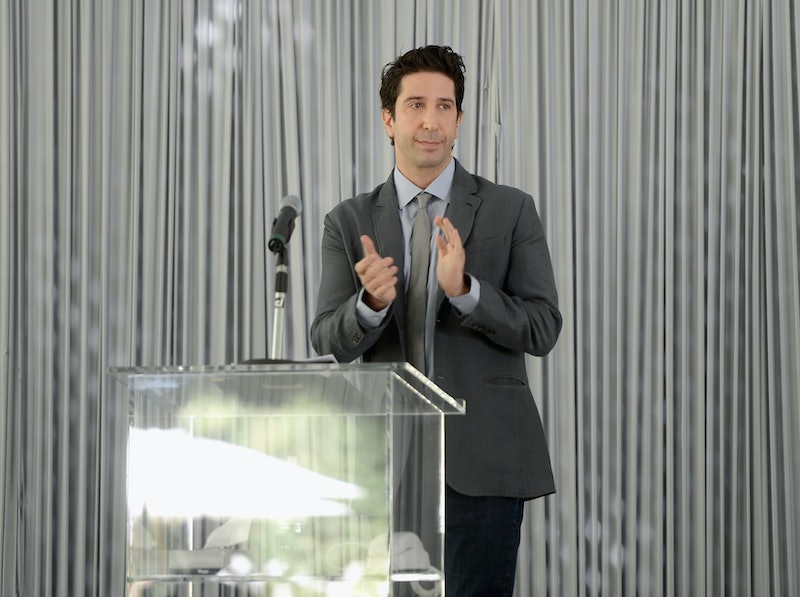 It's been over a decade since we heard Ross Gellar scream "We were on a break!" during that legendary Friends episode — and while we won't be hearing Ross reiterating his breakup with Rachel anytime soon, we will be seeing his alter-ego — aka, the actor who played him — grace our television screens yet again. As reported by The Guardian on Thursday, David Schwimmer is returning to television with a new sitcom on the United Kingdom's Channel 4, and it's everything a Friends fan could ever hope for — except for, you know, Ross and Rachel and Monica and Phoebe and Joey and Chandler, of course.

According to Deadline, Schwimmer's new sitcom is called Morning Has Broken, and co-stars Julia Davis — who penned the six-part series along with Nick Mohammed, who is also co-starring — as a morning talk show host. Schwimmer will play the show's American producer, slated with saving the failing talk show when things go haywire. This is a job that would have been terrible for his former character Ross: any Friends fan knows that this guy is definitely not the person you put in a stressful situation. (He's totally not fine, you guys.)

So, how would Friends fans react to the news that one of their beloved six Manhattanites is returning to the small screen? Here are some reactions to the news, courtesy of none other than Ross himself:

1. When You Thought Schwimmer Quit Acting

Wait, Schwimmer is returning to TV? Doesn't he like, direct, mostly? Why is he doing this?

2. When You Find Out There Will Only Be Six Episodes

Wait, so we're getting Schwimmer back... but only for three hours of our time? Total bummer.

3. When You Realize This Is Actually A Pretty Big Deal

Ten years is a seriously long time since Friends, even if doesn't feel nearly as long because you watch it on the daily on Netflix.

4. When This Is How You Feel About British TV

Thanks for uniting us with our TV friend, Channel 4!

5. When You Realize You're Freaking Out And Need To Take It Down A Notch

6. When You And Your BFF Talk About Watching Schwimmer's New Show

So many happy feels.

7. When You Realize Waiting For This New Show Is Not Going To Be Easy

And just like Ross, you are are anything but fine.

We missed you, Schwimmer: can't wait to see a calm, collected version of Ross back on the small screen!