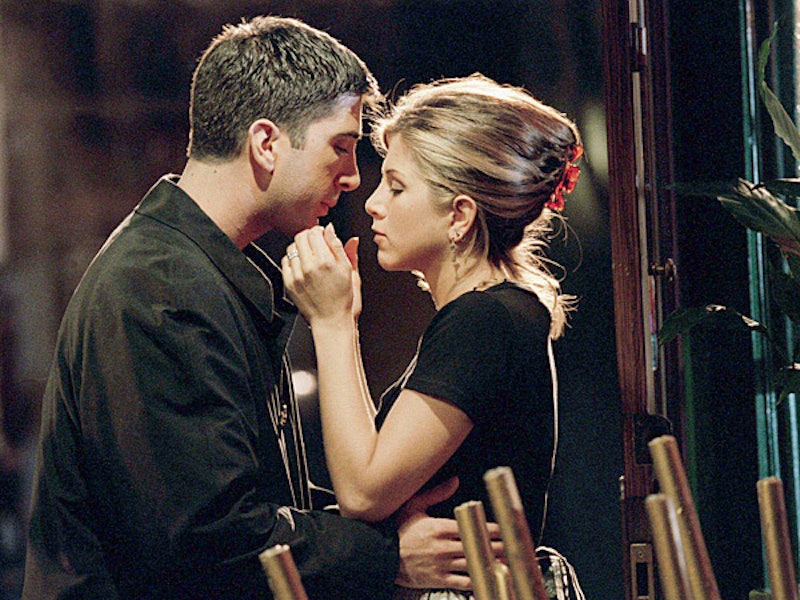 There are a lot of important elements that make Friends the ten years of excellent TV it really is, but there's one common thread that runs through it all: Friends' central couple Ross and Rachel. From the pilot episode to the series finale, their relationship is a major plotline — even in the episodes where it feels like it isn't. And, recently, while re-watching the painfully awkward episodes where Joey and Rachel date (which never should have happened, TBH) in Season 10, I realized that Ross mentions, "We haven't been a couple in six years." Wait, WHAT? They may not have been in a formal relationship that long, but they're always "together." They're always a couple, right? And this timeline of Ross and Rachel's relationship will prove it.

Because as much as I love Monica and Chandler together, Ross and Rachel's relationship is clearly the OTP of the bunch. They were meant to be since they were teenagers — how many people can say that? And, now that the show has been over for a long time, I can only imagine they're living in the suburbs with a teenage Emma and the rest of their beautiful children, living happily ever after with tons of dinosaur figurines.

Do not try to argue with me: Theirs is one of the most epic love stories ever told, and here's everything that happened between them to prove it:

In this time before the show — although we've seen flashbacks of most of it — Ross and Rachel meet, and then Ross goes to college and, unbeknownst to Rachel, almost takes her to the prom when Chip flakes on her. Aww.

In the pilot, Ross and Rachel reconnect for the first time in years when she leaves Barry at the altar, and they split an Oreo while Ross casually mentions he'd like to ask her out sometime... but unfortunately, that goes nowhere. Rachel doesn't find out how Ross really feels until the season finale, "The One Where Rachel Finds Out," and she rushes to the airport to tell Ross how she feels before he leaves for China.

Rachel tries to confess her feelings to Ross, but he gets off the plane with Julie — and the new gal is sweet, but she's clearly just a foil to their plot. A few episodes later, in "The One Where Ross Finds Out," he gets a message on his answering machine from Rachel about how over him she is, even though she is not, in fact, over him. He totally screws it up when Rachel finds out he actually made a pro/con list to dating her or Julie, and they don't finally get together until "The One With The Prom Video," when Rachel discovers Ross almost took her to the prom. He's her lobster!

Season 3: The Time They Were On A Break

Their relationship is going great... until Ross' becomes jealous of Rachel's coworker Mark. In "The One Where Ross and Rachel Take a Break," they kinda, sorta split up, but get back together the next morning — which leads to one of the most heartbreaking scenes in the entire show when Rachel finds out that Ross slept with Chloe the hot copy girl while they were "on a break."

In "The One With The Jellyfish," Ross and Rachel almost get back together when he falls asleep reading a letter she wrote him that was 18 pages FRONT AND BACK. He doesn't realize he agrees to taking full responsibility for sleeping with Chloe, and their relationship quickly ends, again. Cue tears. Later in the season, while Ross is engaged to Emily, she realizes she has to stop him from getting married, but once she gets to London, all she can do is wish him luck.

In the middle of his wedding to Emily, Ross accidentally says Rachel's name instead of his future wife's — awkward. Eventually, their marriage crumbles because she can't handle his friendship with Rachel, and I'm so glad it did, or else we would never have gotten the beautiful scenes of Ross and Rachel drunkenly married in Vegas.

Ross and Rachel move in together, and Rachel has no idea they're still married — until they have to get a divorce later on. Not a lot of romance here, because Rachel is pissed.

In "The One With Monica's Thunder," Ross and Rachel almost hook up because she's feeling bummed now that Monica's engaged and she's single. It never happens, even though Ross has the magic hands.

Rachel finds out she's pregnant with Emma, and tells Ross he's going to be a father. Later in the season, Joey tells Ross he has feelings for Rachel, and accidentally proposes to her after she gives birth when Ross wanted to ask her to start things back up again.

Season 10: She Got Off The Plane

The best part, guys: After the short lived Rachel/Joey relationship that I choose to pretend never happened, these two kids finally get their act together when Ross stops Rachel from going to Paris and they live happily ever after in the series finale.

See, they were always meant to be. Isn't love beautiful?