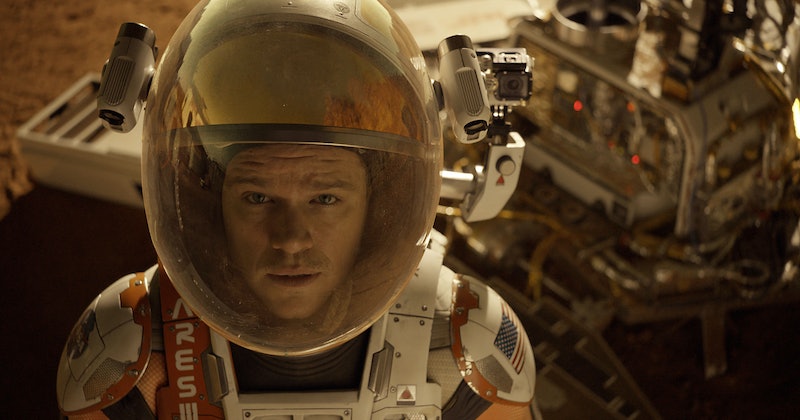 When I saw the first trailer for The Martian, I was expecting something in the same vein as Interstellar. I thought it was going to be a very heavy sci-fi movie with complicated scientific theories, inter-dimensional space travel, and intense metaphors about life philosophies. To my surprise, the film took a different approach to the typical sci-fi movie: it actually made science fun. Rather than having viewers feel like they were watching a lecture at a planetarium or doing science homework, the movie was an entertaining, suspenseful movie that didn't seem like it was glazed with a Hollywood sheen. It's a bonafide adventure film that can be respected by science aficionados and admired by regular popcorn-eating moviegoing audiences — and, thankfully, adored by readers of the Andy Weir novel upon which it is based. The Martian quotes directly from the book, and overall, it sticks pretty true to the author's story, so book readers, don't worry: this is an adaptation you're gonna want to see.

Much of the movie's dialogue comes right from the book, with much of Watney's trademark humor still there. It kind of has to be — Mark having a sense of humor and constantly talking to himself is probably the only way he could stay sane, living on a planet entirely by himself. It's kind of like tweeting without actually having Twitter. The humor make The Martian such a great story and adds so much character to Watney. Here are the best quotes from The Martian that made it into both book and movie (spoilers ahead):

"If the oxygenator breaks down, I'll suffocate. If the water reclaimer breaks down, I'll die of thirst. If the Hab breaches, I'll just kind of explode. If none of those things happen, I'll eventually run out of food and starve to death. So yeah. I'm f*cked."

Mark's assessment of being stranded on Mars is, well, realistic.

"If I want water, I'll have to make it from scratch. Fortunately, I know the recipe: Take hydrogen. Add oxygen. Burn."

When Watney, a botanist, decides to make his home potato farm, he realizes he needs water. So he makes it.

"I don’t want to come off as arrogant here, but I’m the best botanist on the planet."

After succeeding in making a potato farm on Mars, he gives himself some bragging rights.

"They say once you grow crops somewhere, you have officially 'colonized' it. So technically, I colonized Mars. In your face, Neil Armstrong!"

The bragging continues a little longer because he deserves it. If you figured out a way to plant potatoes on a remote planet, you'd do the same.

When Watney is stranded on Mars, he's left with everything he needs to survive for a limited amount of time: food, necessary equipment, and electricity. The one thing he has an endless supply of is Commander Lewis' (Jessica Chastain) collection of disco music, which is the only music available. When he makes contact with his crew, this line is one the first things he has to say.

"I admit it's fatally dangerous, but I’d get to fly around like Iron Man."

When he is close to being saved by the crew, Watney and Commander Lewis are trying to figure out the best way to get him from his floating ship to the rest of the crew on the space station. Watney suggests puncturing a hole in his suit so that the oxygen escaping can propel him. Lewis responds, "We'll keep working on ideas."

"Every human being has a basic instinct to help each other out."

This pretty much sums up what all of us should take away from this movie.

It will only be a matter of time before these quotes become memes that take over the Internet by storm — unless they haven't already.